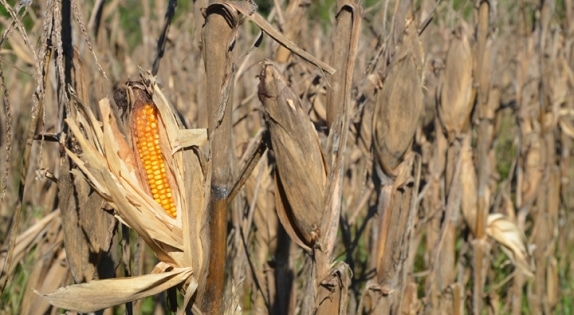 The first time I hunted over a corn patch, I remember seeing the stalks moving as my imagined 10-point buck worked his way to the end of the row. I waited with intense anticipation as the stalks revealed my trophy’s movement, closer and closer to me. Finally, to my surprise and slight disappointment, a button buck appeared, sticking its head out the end of the corn row. My 10-pointer turned out to be a well-fed little butterball fawn. While I did not harvest a trophy, I enjoyed the experience of hunting over this Ohio corn field.

Corn (Zea mays) is an annual, warm-season grass that produces grain on ears that grow along the stem. Although corn grain carries a protein level of 7 to 10 percent, it is high in fat and carbohydrates. It is a great source of energy for deer in the fall and early winter. This high-energy food can be vitally important in the northern areas of the country where winters are harsh. In addition to providing a tasty meal and energy source for deer, corn makes outstanding bedding and thermal cover for deer if left unharvested.

Corn does best when planted on fertile soils. Corn prefers well-drained, loamy soils with a pH between 6.0 to 7.0. Corn does best under irrigation or areas that receive sufficient rainfall and will not tolerate drought. Weed control is another consideration when deciding to plant this crop, because corn does not compete well against weeds. Both pre- and post-emergence treatments of herbicides and the use of some form of cultivation may be necessary in order to establish a good crop (see the chart in the Gallery below for more on the benefits of weed control in corn). Roundup Ready® corn is now available that can assist the deer manager with another options for controlling weeds. Roundup Ready corn is genetically modified to be resistant to the herbicide glyphosate, the active ingredient in Roundup, so you can control weeds without damaging the corn (as long as you follow label instructions). This is a viable option but also comes with more expense.

Corn is most beneficial to deer when planted in larger blocks of one acre or more. Planting times can vary depending on your location and the variety selected. In general, plant in mid-March in the Deep South, April in the middle part of the country, and May in the more northern climates. The real key to planting is waiting until the soil temperature reaches 60°F or more before planting. Planting corn into cooler soils will result in slow or poor germination, so it should be avoided. Corn can be planted by using conventional tillage and planting in rows or broadcast planted in a prepared seedbed. Those equipped can also use the no-till drilling method for their planting. Drilled corn is normally planted at a rate of 5 to 10 lbs./acre. Broadcast rate will be higher, in the range of 10 to 15 lbs./acre. Seeds do best when planted about an inch deep and cultipacked after planting.

Corn requires good soil fertility and is a heavy nitrogen user. Fertilize at planting to the recommendations of a soil test, and be prepared to top-dress the crop with additional nitrogen if needed in mid-growth. Because corn uses a lot of soil fertility, it is best not to plant it in the same field in two or more consecutive years.

There are numerous corn hybrids available that can be used for food plots. Talk to your local seed dealer or county agent about hybrids that are adapted to your region, and avoid “silage” corn hybrids which are selected to produce more forage and less grain. You will also be able to select between early- and late-maturing varieties. Researchers at South Dakota State University found that deer consumed corn ears during the growing season more often on early-maturing varieties. They recommended you choose late-maturing varieties if you want to leave the corn standing for winter nutrition, because deer may be less likely to feed on the ears before they are mature. Just be sure to plant early enough that the late-maturing variety can complete its growth before the growing season ends.

Corn can also be planted in mixtures with other warm-season forages. In the complete profile to be published in QDMA’s Quality Whitetails magazine, I will go into more detail about corn varieties and potential blends with other crops. I will also cover more detail on cultural management tips to produce a successful planting.