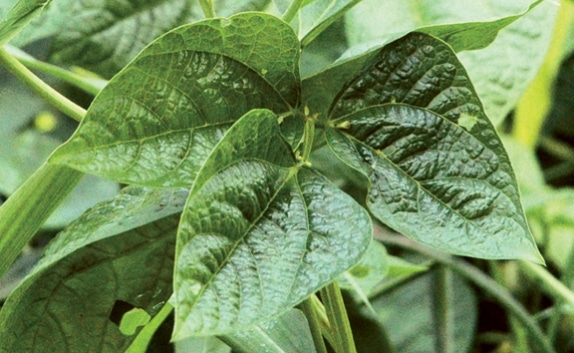 Iron-clay cowpeas are one of my all-time favorite summer forages for deer. I have probably planted more acres in cowpeas during summer than any other species. Cowpeas are relatively inexpensive, easy to establish and manage, grow well under just about any condition, produce a tremendous amount of protein-packed and digestible forage, and deer are extremely attracted to them.

Cowpea (Vigna unguiculata) is a warm-season annual legume that originated from Ethiopia. It is widely adapted to a variety of soils and climatic conditions throughout the country. It has a trifoliate leaf (similar to soybeans) that is deep green in color on top and pale, whitish-green underneath. Leaflets are triangular in shape. Cowpeas are extremely viney, with weak stems causing them to lay over as they mature. If they are planted early and are not overgrazed, cowpeas will produce seed pods that are long and curved.

Cowpeas are extremely attractive and nutritious, containing upwards of 25 to 30 percent crude protein in fields with good soil fertility.

Another beneficial quality of cowpeas is they are extremely drought tolerant. This is especially important in the South, where there is a tendency to get hot, dry weather during summer. Cowpeas are extremely productive and can produce in excess of 8,000 pounds of quality forage (dry weight) per year throughout the growing season.

Compared to other forage legumes, cowpeas hold up pretty well to grazing pressure as long as plots are not too small. Depending on the local deer density and habitat quality, I recommend that plots be a minimum of 1 acre.

As with any planting, soil testing should be conducted to ensure you apply the appropriate amounts of lime and fertilizer to make sure nutrient levels are high and readily available by maintaining a neutral pH greater than 6.0.

Cowpeas do not need much nitrogen applied since they are a legume and produce their own. However, they require high levels of phosphorus and potassium for optimum growth, nutritional quality, and attraction. Thus, be sure to apply the amounts recommend from the soil test to ensure nutrient levels are in the high range. These are the nutrients we want to transfer to deer.

In terms of preparing the seed bed, anytime you are broadcasting seed it is very important to create a smooth, firm planting surface free of large clods and debris to ensure optimum germination.
If no-till planting, make sure to kill the existing vegetation with glyphosate to eliminate weed competition one to two weeks prior to planting.

When planting cowpeas, I typically plant approximately 70 to 80 lbs./acre if broadcasting and cover the seed about an inch by lightly disking. If you are drilling the seed, plant approximately 40 to 50 lbs./acre. If planting a mixture with other species, reduce the planting rate accordingly, depending on the number of species included. Also, it is important to plant when there is good soil moisture or when a good chance of rain is in the forecast.

In the South, cowpeas can be planted as early as mid-April and can be successfully established throughout the summer if soil moisture is adequate. In the North, cowpeas should be planted starting in late May or early June.

One of my go-to summer mixtures is to broadcast cowpeas (40 to 50 lbs./acre), lablab (10 lbs./acre) and peredovik sunflower (5 lbs./acre). I like to include lablab in the mixture because it persists longer than cowpeas, holding deer in the area longer. Sunflowers are included to provide “ladder structure” for the cowpeas and lablab to climb upon for increased production, as seen in the photo below. However, realize that if the deer density is high, sunflowers may be overgrazed. 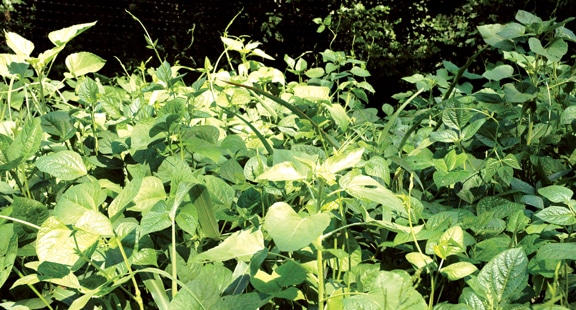 In regions such as the Deep South that have a long growing season, including lablab or an indeterminate-type soybean variety can be very advantageous. For example, planting cowpeas alone in Alabama or Mississippi may not result in quality forage being available to bowhunt over because bow season opens relatively late (mid-October) and cowpeas tend to fade out. Including lablab can extend the longevity of the plot, making it more productive to hunt over until a frost occurs. Alternatively, planting cowpeas later in the summer (late June/July) will ensure they last into bow season.

From about the mid-South region northward, which experiences a shorter growing season, this really isn’t a factor. Cowpeas typically persist until the first frost as long as they aren’t overgrazed and deer will be using them regularly during bow season.

Notice in the aforementioned mixture that all the plantings are broadleaved and that no grasses or grains are included, such as corn, grain sorghum, or Egyptian wheat. This strategy allows more flexibility for controlling grassy weed competition with grass-selective herbicides. If grass competition is not a factor in your plots, then adding a summer grain to the mixture is fine.

Like with any legume, it is important to properly inoculate cowpeas with the appropriate inoculant prior to planting (inoculant code EL). Inoculating seed will result in a more productive and attractive stand as nitrogen fixation is greatly enhanced. This increases protein levels, which enhances body and antler development, as well as milk production in does.

In my full profile in Quality Whitetails magazine sent to NDA members, I also covered early-season hunting strategies using cowpeas, and also weed control techniques. Every issue of the magazine contains one of my complete food plot species profiles, so join the NDA today to start receiving the complete articles.