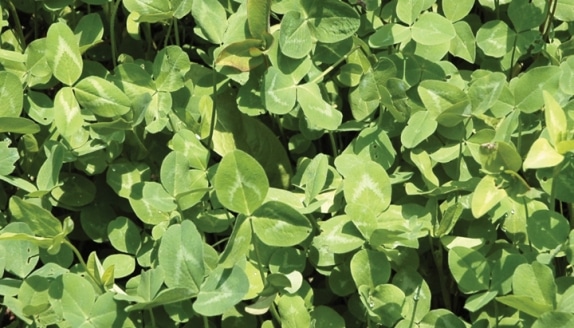 If you don’t have red clover growing in some of your food plots, let me explain why you should.

Dr. Craig Harper and I examined red clover in research plots in Tennessee for several years. We analyzed overall production, preference, nutritional quality, resistance to grazing, drought tolerance, herbicide management, and other characteristics compared to virtually all other cool-season forages planted for deer. Our research found that red clover consistently rated very high compared to other deer forages – including cereal grains, annual and perennial clovers, brassicas, alfalfa, and others – with regard to many of the important features we looked at.

Red clover (Trifolium pratense) is a cool-season legume that is classified as a biennial with a two-year lifespan, but with proper management it can persist for three or more years in the mid-South and northern states. In the Deep South, red clover performs more like an annual. Some of the more common improved varieties of red clover that perform well are Red Gold, Redland III, Bulldog, Kenland, and Cherokee. Cherokee is generally best suited for food plots in the Deep South.

Where overgrazing is not an issue, red clover can reach 2- to 3-feet tall during summer. One of its distinguishing characteristics is the leaves and stems are hairy and it produces a pinkish flower/seed head in the summer months. Many confuse red clover with crimson clover, which produces red/crimson flowers. The leaflets of red clover are oval-shaped and most are marked with a white “V.”

Red clover is widely adapted to different soil and climatic conditions and is fairly tolerant of soil acidity. It also tolerates dry conditions quite well, and it is one of the best yielding clovers available. In our research plots during low rainfall years, we measured dry-matter production rates in excess of 6,500 pounds per acre per year!

Crude protein levels in red clover typically range from 20 to 30 percent depending on soil quality and the time of year. It is very attractive and preferred by deer compared to other forages, and its resistance to grazing pressure would be considered very good.

Conduct a soil test to determine lime and fertilizer requirements specific to red clover. This will ensure a healthy and productive clover stand, allowing the full nutritional benefits to be realized. Although red clover can tolerate soil acidity, a pH greater than 6.0 is recommended to maximize nutrient availability.

Since red clover is a legume and capable of producing its own nitrogen, little nitrogen is needed for establishment and maintenance. However, it does need high levels of phosphorus and potassium for optimal growth and nutritional quality, so be sure to follow soil test recommendations to determine how much needs to be applied. If a soil test is not conducted, apply a minimum of 40 to 50 lbs./acre of phosphorus and 60 lbs./acre of potassium at establishment.

Red clover is very easy to establish and can either be broadcast at a rate of 15 lbs./acre or drilled at 10 lbs./acre with a no-till drill. Because it is a legume, red clover should be inoculated with Strain B inoculant prior to planting unless you purchase pre-inoculated seed. If broadcasting seed, be sure to prepare a smooth, firm seedbed to ensure optimal germination and seedling establishment. Red clover seeds are very small, so be sure the field is free of deep furrows from disking and large clods/debris to prevent covering the seed too deeply. Cultipacking prior to sowing the seed will assist with achieving a good seedbed and enhance germination.

Also, the seed doesn’t need to be covered more than 1/4-inch deep. If rain is in the forecast you can simply allow it to work the seed into the soil. If not, cultipack the field again to press it firmly into the soil for good contact. If no-till planting, be sure to kill the existing vegetation with glyphosate a couple weeks prior to planting to eliminate weed competition.

Red clover can be planted in the fall as well as frost-seeded in early spring. Fall plantings in northern regions should occur in August or September while southern plantings should occur in September or October. Alternatively, if frost-seeding in late winter/early spring, northern food plotters should shoot for a March planting while those in the South should plant in February. Remember, when frost-seeding, it is important to ensure good seed-to-soil contact to allow the freezing and thawing of the ground to absorb the seed into the soil for optimal germination when the soil temperature is adequate.

Not Just for Cows

Some have associated red clover with cattle due to its use in pastures for grazing and hay production. This association resulted in red clover being perceived by some hunters as more of a “cattle clover.” However, I consider red clover to be one of the top clovers for deer.

Red clover performs very well alone or as a companion plant in a variety of mixtures. It does very well in perennial mixtures using white clover and chicory. In the complete profile in Quality Whitetails magazine I went into detail about specific mixtures you can plant, and I also provided guidance on weed control in stands of red clover. To start receiving my full crop profiles in each issue of the magazine, I encourage you to become a member of QDMA today.