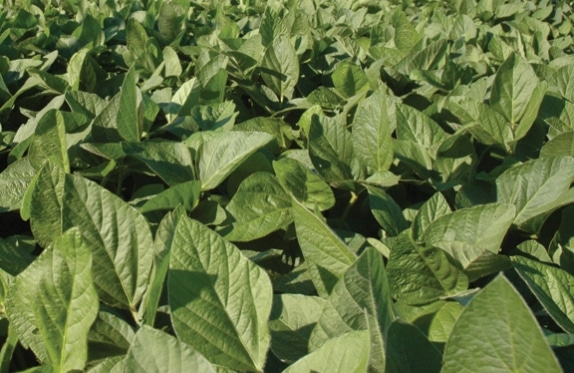 Soybeans (Glycine max) are a warm-season annual legume and perhaps the most preferred summer forage for white-tailed deer. They are extremely nutritious, containing upwards of 25 to 30 percent crude protein in fields with good soil fertility, well above the amounts required by deer for optimal body and antler development.

Soybeans are adapted to a wide range of soil types throughout the whitetail’s range, but well-drained soils are preferred. They are easy to establish, and, if managed properly under balanced herd conditions, come as close to a true “year round” food plot as there is. I have planted soybeans in late April that provided quality forage throughout spring, summer, and early fall. Deer then consumed the grain all winter, with some beans still in the pods in February! That’s a steady 10 months of attraction and nutrition with a single planting.

Despite the overwhelming number of soybean varieties, deer really aren’t particular when it comes to eating them. I am unaware of a variety that deer won’t consume relentlessly. However, a specific type (or group) of soybeans may help fulfill your objectives. For example, if you live in the South with a long growing season where late summer is typically the most stressful time period for deer, a later-maturing forage soybean will ensure ample forage is available in the critical August and September months when natural food sources are low. Conversely, if you live in the North with a short growing season and you are more concerned about having an abundance of standing beans (grain) to hunt over in winter, then an earlier-maturing seed-type bean may be better suited.

Now that you are fired up and ready to get beans in the ground this spring, be warned. Deer really like soybeans. Don’t expect to be able to plant a couple 1-acre fields and produce abundant forage all summer and have standing beans to hunt over during winter. Don’t waste your time or money. Resistance to grazing pressure in the early stages of plant growth is a real limitation for soybeans. However, if you have large fields or adequate acreage that can be devoted to soybeans, then you’re in business.

There are some potential options available, such as repellents and fencing to help establish soybeans in areas where overgrazing is a problem. I covered these methods in the full profile in Quality Whitetails magazine that went to QDMA members. However, I have mixed feelings about preventing deer from eating something you planted for them to eat! Ideally, a deer herd should be within the carrying capacity of the property. If this isn’t the case, consider reducing deer density or devote more acreage to food plots in conjunction with habitat management to promote increased food availability on your property. Ensuring the deer herd is in balance with the habitat on your property is key.

As with any planting, test the soil to ensure you apply appropriate amounts of lime and fertilizer. Maintain a neutral pH greater than 6.0.

Soybeans need high levels of phosphorus and potassium for optimal growth and nutritional quality, so be sure to follow soil test recommendations. Less nitrogen will be needed since soybeans are a legume and produce their own.

Anytime you are broadcasting seed, it is very important to create a smooth, firm planting surface free of large clods and debris to ensure optimal germination. If no-till planting, get a good “burndown” with glyphosate to eliminate weed competition a couple weeks prior to planting.

I generally prefer planting soybeans alone rather than in mixtures with other species, particularly if I’m not familiar with the weed species that might be encountered. This strategy allows more herbicide options for weed control, which is often an important aspect of growing soybeans. Again, I covered weed control options in the full profile. If you aren’t a member, I encourage you to join QDMA, start receiving Quality Whitetails magazine and get all the complete food plot species profiles.

There are lots of very good forage soybean varieties available on the market. Some of the more common include Tyrone, Laredo, Quail Haven, and the Eagle Seed varieties. Some of these are better suited for certain conditions than others, so be sure to consult with a local professional to select the one that best accomplishes your objectives.

Different varieties often require different planting rates, but in general plant approximately 70 to 80 lbs./acre if broadcasting and approximately 45 to 55 lbs./acre if drilling. If planting in a mixture with other species, reduce the planting rate accordingly. In the South, soybeans can typically be planted in mid-April through June. In the North, plant in May or June.

It is also important to inoculate soybean seed with the appropriate inoculant prior to planting (inoculant code S). Doing so will result in a much healthier and attractive stand as nitrogen fixation is greatly enhanced, increasing protein levels.