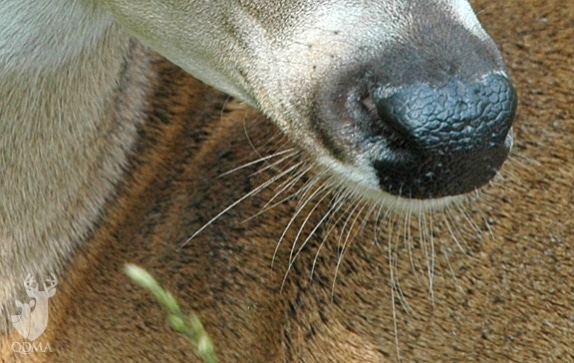 Although deer are among the most studied mammals, there are many questions that have yet to be answered. One such question is right under our nose – or, more accurately, right beside theirs. We are referring to “deer whiskers.”

Also known as vibrissae, these long specialized hairs are located in complex patterns around a white-tailed deer’s mouth and nose, as seen in the photo above, and also around the eyes as seen below. Most hunters have rarely given them a second look or thought – if they have noticed them at all. Vibrissae are thought to provide tactile function, meaning a sense of touch, to help animals feel the presence of objects close to the mouth, nose, or eyes. They seem especially common in mammals that are at least sometimes nocturnal, suggesting they are particularly useful in the dark. Nevertheless, we suspect they are also important to deer for other reasons. Their very survival may depend on them.

Man has whiskers, too, of course, but their function has been reduced to little more than a so-called secondary sexual characteristic. Not that they are totally useless to us, but most of their original use as a sense organ has been lost in humans. In fact, mammals like us that have lost or never had much of a sense of smell rarely have true vibrissae. This fact suggests that vibrissae are linked with smell as well as touch.

Vibrissae’s greatest importance to animals with an acute sense of smell may be to determine air movement. Perhaps they are used to “feel the air,” indicating from which direction a scent is coming, whether it’s that of a dangerous predator like a hunter or a valuable food source. If this is the case, then whiskers are as important to deer as the nose itself. If vibrissae were permanently removed in some deer but not others, our guess is that deer lacking them would be more likely to die at an early age than those with their whiskers intact.

About the Authors: Dr. R. Larry Marchinton is a Professor Emeritus of Wildlife Biology with the University of Georgia. Forrest B. Marchinton is a wildlife biologist with Georgia DNR’s Bobwhite Quail Initiative. Both are Charter Life Members of QDMA.