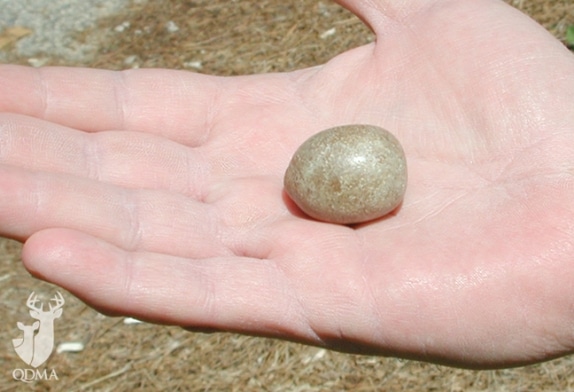 If Hermione Granger found a bezoar while field-dressing a whitetail, she’d know what to do with it, and so do you if you’re a Harry Potter fan. Save it, of course, to use as an antidote against poison.

The magical properties of bezoars are entirely fictional, but bezoars are not. Professor Snape didn’t supply complete information when he taught his students that a bezoar is a stone taken from the stomach of a goat. You can find them, though rarely, in the stomachs of whitetails and a lot of other animals, too. The photo above is a bezoar that came from a whitetail.

What is a bezoar? It’s basically a pearl for mammals. An indigestible object gets hung up in the digestive tract, and over time it becomes coated with multiple layers of minerals, forming a smooth stone, also known as a “madstone.” This works out well for the animal because the smooth object is now less of an irritant to the stomach lining. QDMA CEO Brian Murphy found the whitetail madstone shown above, and he recruited help from his dentist, QDMA member Tim Garrett, to x-ray the madstone and see what was inside. The x-ray is shown on the right, revealing the shape of an acorn (you can see the image enlarged in the Gallery below). Apparently swallowed whole by a deer, the acorn got stuck and a large madstone was the result.

Professor Snape’s fictional knowledge of bezoars has a basis in actual cultural history. In folklore, madstones were reputed have magical properties. In the Adventures of Huckleberry Finn, Huck’s raft mate Jim owned a fist-sized stone found in the stomach of an ox that he claimed to be magical. They also supposedly bring good luck.

How common are bezoars in deer? That’s unknown, and since very few of us root and sift through the gut contents of the deer we kill, it’s likely we’ll never know. Most of those that form are probably never discovered for this reason. However, you can certainly learn a lot about a deer’s diet this way, and who knows? You might just find your own bezoar. But if you do, and afterward you are somehow poisoned, I strongly advise you to go to a hospital with the rest of the Muggles.