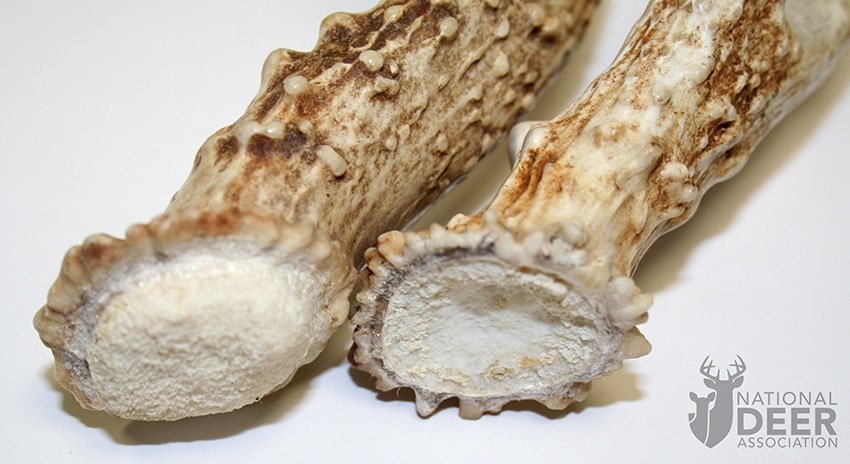 There’s a quick way to look at a shed antler and tell whether the buck that dropped it was in good health back in the fall during the rut. No, it’s not mass. It’s not tine length or count. And it’s not beam length, color or character. New science from the University of Nebraska at Kearney (UNK) is teaching us more about sheds as a window into deer and habitat health, especially at the point where the shed was once attached to a buck’s skull.

This science involved one of my favorite annual activities – shed hunting. Someone had to collect a lot of shed antlers for this study, and science hasn’t discovered a better way to do it than a good pair of hiking boots or a shed-hunting dog. Brian Peterson, a researcher at UNK and one of the co-authors of the new study, is also an avid deer hunter, so this part of the research was not drudgery to him.

“After work. Weekends. I’ve hit it pretty hard each spring for the last 10 years, working multiple properties where we had permission to search, and my average is 40 to 50 sheds each spring,” said Brian.

His co-researcher Dr. Casey Schoenebeck, who is now with Minnesota DNR, also hunted sheds. Brian calculated they averaged around one shed antler per mile walked, or about one per hour, in the woods and fields along the Platte River near Kearney, in south central Nebraska.

A Tough Year for Deer

But in the spring of 2013, Brian set a record, finding more than 100 shed antlers personally on various properties where he had permission to search. The reason for his high success rate that year was an unusual lack of grass and weed cover, making it easier to see the sheds – a result of an eight-month-long period of extreme to exceptional drought that hit Nebraska from August 2012 to March 2013. Additionally, the area’s growing season ended 10 days earlier than normal that year, with the first freeze hitting on September 23, 2012, when the average first freeze date is October 8. Brian’s study used only “fresh” sheds with a known growth year, but in spring 2013 most of his record haul was made up of old, chalky sheds. He’d probably walked by them in years past, he just couldn’t see them until after the record drought.

Nebraska deer hunters remember 2012 for another reason: the record-setting outbreak of epizootic hemorrhagic disease (EHD) in summer and fall that reduced the state’s deer population by an estimated 30%. Combined with the short growing season and severe, extended drought, it’s a fact that 2012 was an exceptionally stressful year for Nebraska whitetails.

That ended up being an opportunity for Brian and Casey, who were already three years into data-collection on a study of antler characteristics, buck age, and hunter selection of bucks for harvest. By the end of shed-hunting season in 2017, they had eight years of information and an extreme climate and disease event right in the middle of the span.

Their data included measurements from 447 shed antlers that could be assigned to the year they were grown (These “fresh” sheds were confirmed by the presence of skin, hair or blood still visible around the base). In the cases of matched sets of sheds, only the first side found was included in this dataset.

In particular, Brian and Casey collected measurements of something called “pedicle seal depth” from each shed antler. The “seal” is the separation line between a buck’s pedicle and the shed antler, and it can form at different places on the pedicle each year in a buck’s life depending on certain variables.

Dr. George Bubenik of the University of Guelph in Ontario determined in earlier research that a buck’s testosterone levels during peak rut influence the location of the seal, which tends to form higher on the pedicle, or closer to the antler burr, in a buck with low testosterone. This leaves less bone below the burr on the shed antler. So, measuring seal depth is essentially measuring how much bone material protrudes below the burr of a shed antler. If testosterone levels were so depressed that the base of the shed antler is hollowed out or “concave,” then the seal depth will be a negative number.

Looking at the pedicle seal depths for the entire dataset across eight years, Brian and Casey saw very little variation – except for antlers grown in 2012. That year, the average pedicle seal depth for bucks of all ages was significantly lower. You can see the significant dip in the graph below.

(Note: Age and antler data from a previous study in this region showed 93% of yearling bucks had main-beam lengths below 14.3 inches, and this was the cut-off used to separate sheds into two groups: yearlings and all bucks 2½ or older.)

Buck antler growth is tied strongly to nutrition, but in 2012 in south central Nebraska most of the antler growth was complete by the time the drought and EHD appeared in August. However, the peak of breeding was yet to come, and it is buck testosterone level during the rut that determines the point of separation for antlers when they are cast in winter or spring. Testosterone level can drop with the onset of stress – whether that’s from poor nutrition, injury, disease, or rut exertion. It was pretty clear to the researchers from the significantly lower pedicle seal depths that Nebraska bucks as a group were not in optimal health in fall 2012.

“We found unhealthy bucks with small pedicle seal depths in every year of the study,” said Brian, “but we just found a lot more after that drought year.”

The researchers saw no significant difference in average antler characteristics of hunter-harvested bucks during the same time period, because, again, antler growth was mostly complete in 2012 when the trouble began. It was the pedicle seal depth of shed antlers that was the more sensitive indicator of trouble later in the fall.

This means, when you pick up any shed antler with a base that is essentially flat or level with the burr, or even hollowed out deeper than that, you know that buck was under some type of stress during the peak of breeding.

Conversely, a shed with a “deep” seal or large extension of bone below the burr was in top condition with normal testosterone levels during the rut. (Side note: the extension of bone I’m talking about does not include any extra, abnormal splinters of bone that sometimes break off the pedicle base and remain attached to the shed).

Any buck might suffer from an injury, a disease like EHD, or some other mishap that could cause stress during the rut, and as Brian said, they found some “unhealthy” shed antlers every year. But if most of the shed antlers you pick up where you hunt are “unhealthy” from the looks of the pedicle seal, it’s more likely you have a nutrition issue. There isn’t enough quality nutrition to prepare bucks for rut exertion or help them maintain testosterone at normal levels. Further examination of local habitat and deer density would be a good idea. You may need to improve forage quality and abundance, harvest more does to reduce deer density, or both.

Brian and Casey had 31 matched sets of shed antlers in their dataset. They found no difference between the pedicle seal depth measurements between sides in matched sets, because as they wrote “each side equally represents the health of the deer that cast it.”

“If the pedicle seal is indented, it’s going to be indented on both sides of a matched set. I have not seen it any different,” said Brian. “We’re looking at this in another study, and we’re finding that seal shape and depth is an even better indicator of matched sheds than beam length and number of points. So, if you find what you think might be a matched set of sheds, but you aren’t sure, that’s one way to confirm it.”

Like all shed hunters, Brian and Casey were itching to get started each winter, but they tended to wait until the worst winter weather was over to avoid bumping and stressing deer that needed to save every bit of energy they could. So, they couldn’t always confirm whether new sheds had dropped early or late in winter. However, Brian said it seemed to him that early dropped sheds tended to have a higher rate of flat or hollowed seals.

This would make sense. Nutritional or physical stress is known to be a factor in shed timing, and bucks under stress often drop antlers earlier than average. As you find sheds this year, look for such patterns. Among the earliest sheds you find each year, do they more often have less bone below the burr, or a hollowed-out seal?

Talking to a scientist who personally located 40 to 50 shed antlers annually for more than a decade, I wasn’t going to hang up the phone without asking this question: “Any shed-hunting tips?”

Along the Platte River in winter, deer are moving back and forth from bedding cover in wooded areas along the river to alfalfa and corn fields nearby. Hunting in these fields or in thin, wooded corridors that connect them to the river is a good bet, Brian said. He’s also found a few by checking alfalfa hay-bales that have broken open.

“The Platte River is a braided river in this area, and it has lots of channels. Deer will often bed on the south-facing banks of these channels where they can catch the sunlight,” said Brian. “I’ve had some luck on these south-facing banks. Otherwise, it’s searching bedding areas or travel corridors between food and bedding.”

The extremely tough conditions of 2012 did not seem to have a long-term effect on most bucks in the study, based on the larger dataset that included antler characteristics of hunter-harvested bucks – with one exception. Bucks born in 2012 exhibited somewhat smaller antler characteristics in later years compared to bucks born during non-drought years. Main beam lengths and circumferences for this group were to 2% to 4% smaller than the averages for their age over subsequent years after 2012, and they tended to have fewer total antler points as well.

Tough conditions in their first year had lifelong consequences. This speaks, once again, to the importance of nutrition in producing antlers, especially in a buck’s first year.

As deer hunters, there’s nothing we can do to prevent drought or its effects on forage quantity and quality. But as habitat and deer population managers, we can work to ensure deer are in optimal condition when they encounter unavoidable environmental setbacks. When deer density is in balance with quality habitat, they’ll be buffered from the effects, and they’ll recover faster when it’s over.