Last year was a good hunting season at Grace Acres, my family’s farm in Southeast Georgia where we have practiced Quality Deer Management (QDM) for many years. My brother-in-law Zack Clemons killed his first buck ever on opening weekend of gun season – a 2½-year-old 8-pointer. He said he felt like he’d never seen so much antler on a buck before, and he was ecstatic. I was excited for him, and so were friends and neighbors.

Some might think, “Wait. What? You were happy for him?” Yes. There was no shaming, no embarrassment, no casting shade with a thoughtless comment like “He’d have been a good one next year.” Just like when my sister Nell killed her first buck here, just like when guests have taken first deer that made them happy.

We pass up the majority of yearling and 2½-year-old bucks, but we understand that if someone on or near our farm decides one of these deer makes them happy, it is something to celebrate. Encouragement and inclusion leads them to become more engaged with deer hunting, and many though not all eventually become interested in helping achieve QDM goals.

Proof of this came along two weeks after Zack killed his buck, when my dad took his best buck ever on the farm (above), a mature 10-pointer that will make the Georgia Outdoor News top-10 list of bucks by official net score in our county, our second buck in the top-10. Seven more of them have been killed within two miles of the farm! We didn’t do this alone. Many – though, again, not all – of our neighbors also protect yearling bucks.

We lead by example, not with pressure or embarrassment, and it works. The ongoing harvest of young bucks will never prevent QDM success so long as many if not most yearling bucks are surviving their first year. Yet, buck-shaming is a problem in the deer-hunting community. It is counterproductive to the future of hunting as well as QDM success. What can we do about it?

Inconsiderate, aggressive, rude people have always been around. That’s just human nature. Before the internet and social media, though, their toxic personalities only affected people with whom they had direct personal contact – in their homes, places of work and on the streets of their communities. Now, social media has given them a megaphone that can broadcast their ill-considered and unsolicited opinions to the world. More than that, this megaphone lends anonymity or physical separation that diminishes restraint and encourages these people to type words they likely would not speak to another person’s face – like “I wouldn’t have shot that little buck.”

This isn’t unique to deer hunting. Jerks post thoughtless, demeaning comments on any and every topic. The problem is, the rest of us have not yet adapted effective mechanisms for responding. In the rudeness arms race, rude people have made an enormous leap forward in their ability to pollute the world with their poisonous opinions. Considerate people are struggling to deal with them effectively and need to catch up. Here are three simple ways I think deer hunters can do this.

First, give all your attention to the victim.

If you see buck-shaming happen in the open, whether on social media or in public, immediately speak your own words of congratulations and support to the hunter who is being bullied. This is the most important single step you can take.

As a parent, I learned a simple rule that works in many areas beyond raising children: Reinforce the positive. If you want to extinguish a behavior, ignore it while giving attention and positive reinforcement to the alternative behavior you prefer. Social media trolls thrive on attention, even the negative attention of being told they are jerks. They may even be shaming someone because they are envious of them and want to distract from that person’s success, but if other people are not distracted by the shaming, the tactic fails. Buck-shaming will end on the day that all buck-shamers are ignored while the successful hunters collect all the likes, fist-bumps and high-fives.

I realize this is easier said than done. It’s a natural and convenient response to return fire toward the shamer. But we will only win the rudeness arms race when we evolve the ability to disregard social-media trolls. Some internet platforms offer “mute” and “block” buttons that are helpful, but don’t rely on them. We must develop our own internal “ignore mode” that helps us see past rude people to praise and support their victims.

Third, stop shaming your own buck.

Don’t begin your story with “Not my biggest buck, but…” This only perpetuates the idea that someone who killed a deer legally could have anything to apologize for. No one is expected to kill bigger deer each time forever. You had a reason this deer made you happy on this outing, and that’s good enough. Tell me about this deer, because I don’t care whether you’ve killed bigger ones.

As Kip Adams once put it, some of my favorite bucks aren’t my biggest, like the bucks I’ve taken on public land or the mature bucks with below-average antlers I’ve been fortunate to encounter. Some of my most memorable harvests weren’t even bucks!

Every deer legally and ethically harvested is something special, no matter your ultimate reason for pulling the trigger that day. You owe no one an apology, a justification, or an explanation, but by offering one anyway you imply it’s necessary. Lead by example: Teach others they can be pleased with every harvest by showing you are pleased with yours.

Buck-shaming must end. When you witness it, oppose it by openly supporting the person who is being buck-shamed. It’s damaging to hunter recruitment and does not improve anyone’s deer hunting. You can support hunters who take whatever legal deer makes them happy and still increase numbers of adult bucks in your area.

We’ve been doing it at Grace Acres for years. 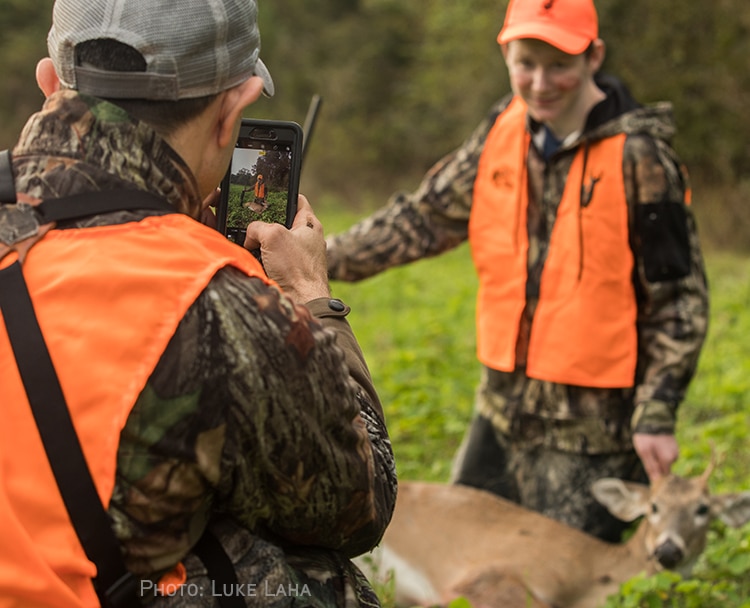