Many years ago, I interviewed a veteran West Virginia hunter who had recently killed a mature buck with his bow. The Mid-Atlantic region was in the midst of a poor acorn crop, and bowhunters were scrambling to figure out what soft-mast foods the whitetails were keying on. Of course, I had to ask the archer how he had patterned the buck.

“I found all kinds of droppings in a thicket and rubs leading into it,” he said. “So I set up along a trail to the thicket. I shot the buck when he came out of it. The most interesting thing about the buck was that the area around his mouth was stained purple. He had been stuffing himself with grapes.”

Among the various soft-mast fruits that whitetails consume, hunters don’t usually rank members of the Vitis genus as among the most popular ones. Nevertheless, deer do readily eat grapes as well as the leaves and vines. Across the country, a number of grape species thrive.

In the mountains of the two Virginias where I predominantly go afield, the most common grape by far is the summer (Vitis aestivalis) variety, seen in the photo above. It flourishes throughout much of the eastern half of the United States. I only infrequently encounter the Fox (Vitis labrusca) grape which is the native version of the commonly cultivated Concord. The domesticated version is well known as a juice, jelly, and table grape. Also known as the winter grape, it too is found throughout most of Eastern America.

“The area around the buck’s mouth was stained purple. He had been stuffing himself with grapes.”

Other important native grape varieties include the muscadine, mustang, riverbank, sand, and frost. One of the most interesting aspects about these and other grape family members is that they are extremely adaptable. On Elaine’s and my properties in the two Virginias, summer grapes thrive in mature hardwood forests, second growth, field and food plot edges, and in copses and clearcuts. I am as likely to find summer grape vines sending up their tendrils on a white oak or black locust as I am as part of the surroundings in a 10-year-old thicket.

In the mountains of the two Virginias, summer grapes start to ripen in mid-September, but they remain on the vines well into winter and are thus available to deer and other wildlife for months afterwards. I’ve observed turkeys feeding on grapes in November and December, ruffed grouse doing so in January, and songbirds well into February.

In late September last year, Elaine and I visited a summer grape arbor that I had located earlier in the summer and had kept watch over since. Our area experienced an abundant hard-mast crop last year, but in poor years, various creatures will hit the grapes hard by early fall. But the vines that day had barely been touched by songbirds and other creatures, so in some 20 minutes of gathering we had enough berries for jelly.

Summer grape jelly is deliciously tart from fruit picked in late September, but if you fail to go out or locate a bower until even well into November, the grapes will likely still be quite edible and much sweeter – again, however, if plenty of hard mast exists and wildlife species have more menu options. We prefer our jelly on the tart side, which is why we pick earlier. Delay gathering until December, however, and the grapes may well have metamorphosed into “raisins” and become unsuitable for jelly. Here is Elaine’s recipe for grape jelly and one we devised together for venison chili.

To make the juice:
Remove the grapes from the stems. Sort and wash them well. Crush the grapes, place them in a saucepan and add enough water to cover. Bring to a boil on high heat. Reduce the heat and simmer for about 10 minutes. Strain the mixture through a strainer to extract the juice. Place the juice in a refrigerator to chill. The next day when you’re ready to use the juice, strain a second time through cheesecloth to remove any tartrate crystals that may have formed.
If you didn’t find enough grapes to make a quart of juice, measure the juice that has been prepared and adjust the sugar and pectin proportions accordingly. 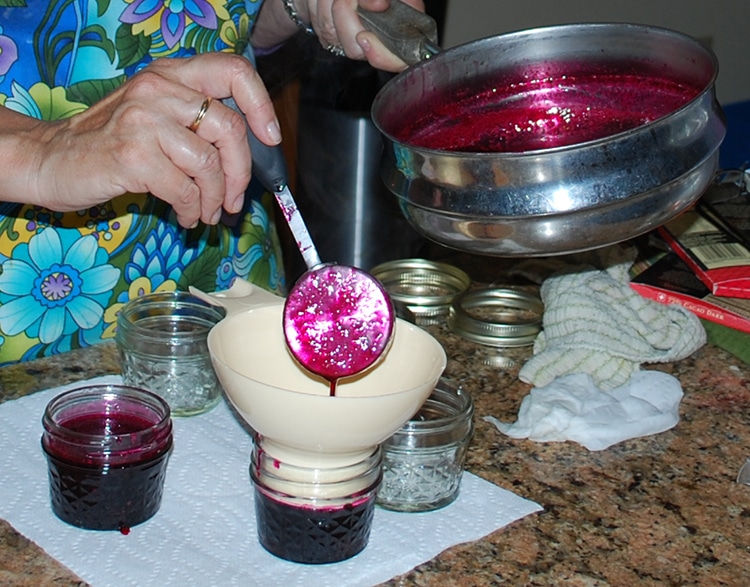 Follow the directions for the pectin product you have, but generally this is what to do: Measure the juice and place in a large pot or kettle. Stir in the sugar. Cook over high heat, stirring constantly, until mixture comes to a full rolling boil – meaning one that can’t be stirred down. Add the pectin, bring to a boil again, and boil for 1 minute.

Remove from the heat and skim off any foam that is on top. Pour into sterilized jars and follow the directions for sealing the jars by the water-bath method.

Bruce is allergic to red peppers, and he is not a fan of hot, spicy foods even though I am, especially chili. My husband has never cared for chili, so to compromise we came up with this recipe which is quite acceptable to us both. If you and your spouse have children who want to be introduced to chili or young ones who have not developed a palate for zesty, heat-producing food, this recipe is ideal for them as well. A family member who likes their chili hot could always, after cooking, add ingredients to make this dish reach the four-alarm level. 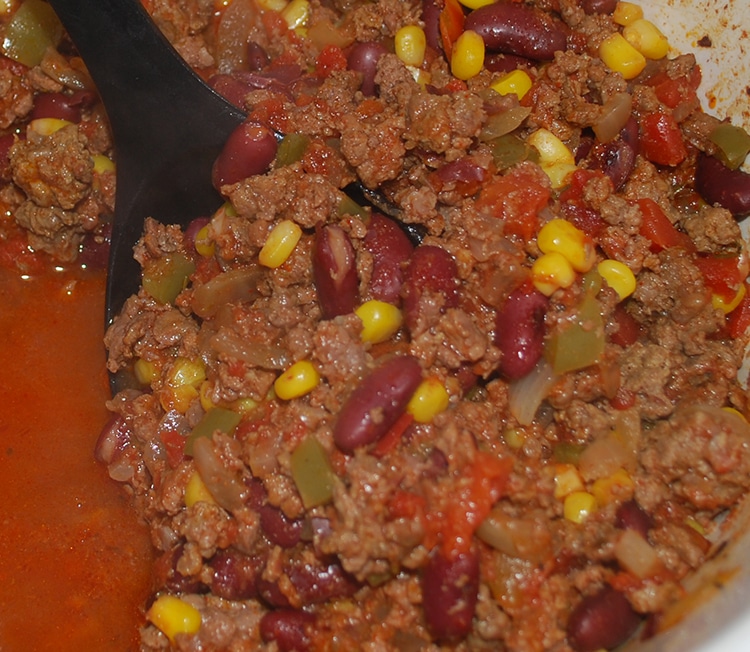 We daresay that few deer hunters will attend or create a dinner this year where mild-tasting venison chili and grape jelly on whole wheat bread will be the main draws. But these two foods go quite well together, especially if you and yours relish the hunt-gather lifestyle.

Pour the oil in a skillet and heat over medium. Cook the ground venison with the onion until all pinkness is gone from the meat. During the last couple of minutes of this, add the minced garlic. Drain any fat and place the venison mixture in a crockpot. Add the bell pepper, drained beans, corn, and seasonings. Cover and cook over low for 3-4 hours. Toward the end of the cooking time, add black pepper to taste. Serve in bowls. Top with grated cheddar cheese, sliced green scallions, and for a heartier kick, sliced jalapenos.