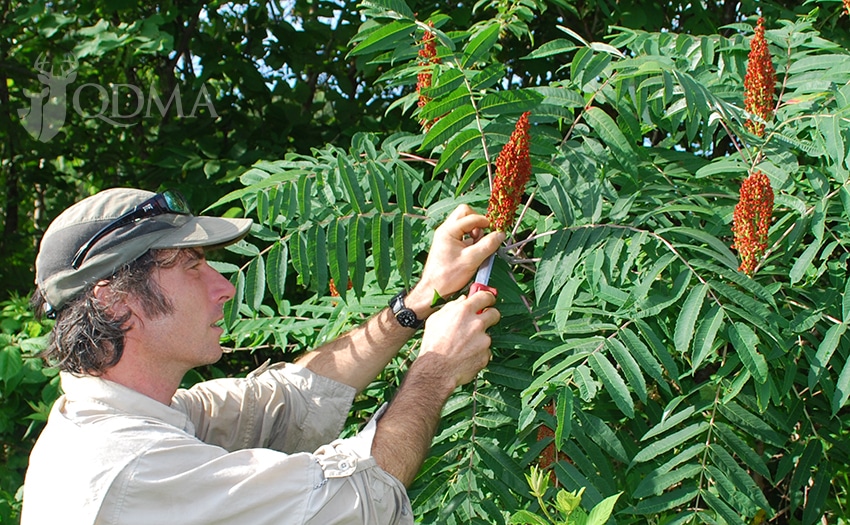 As fellow QDMA member Bryce Clingenpeel and I are driving down a rural road in Botetourt County, Virginia on a late July day, he suddenly slams on the brakes, quickly parks his truck on the roadside, disembarks, leaps across a ditch, and shouts “Yes!”

Over 20 years ago, I taught English to Bryce at Lord Botetourt High School. He was then, and is now, a quiet, thoughtful person who is not prone to emotional outbursts.

“I was hoping this might be smooth sumac instead of staghorn,” he laughs, “and it is. It’ll make some great lemonade.”

I have never before seen someone become excited (or even mildly interested) about smooth (Rhus glabra) or staghorn (Rhus typhina) sumac. But then again when a few days later (and after the scarlet berry cluster known as a bob has steeped in a quart jar for several days) I first taste Smooth Sumac Lemonade, well, I understood my former student’s enthusiasm.

Except in deserts, smooth sumac thrives across most of the Lower 48, and the staghorn variety abounds in most of the eastern half, especially doing well in upland surroundings. Here in Botetourt, both species dwell and Brice and I spent part of the morning picking staghorn sumac bobs on his land. These two small trees both do best as colonizers, springing up when land is disturbed and receives full sun and gradually disappear when the tree canopy starts to form. Sumacs are a good sign for deer habitat because they indicate you are producing more early successional or “young” forest, where deer forage and cover is more abundant.

The duo also succeed when they are fortunate enough to sprout on forest edges. And after an area has experienced a controlled burn, these two shrubby trees often appear. Fence rows are another likely area to look for sumacs as birds deposit the seeds when they perch.

Both species also feature light brown bark and compound, pinnate leaves. The scarlet fruits, or drupes, are also very similar in their upright clusters. The main distinguishing feature is that the green leaves of the smooth variety are just that – smooth. Whereas the staghorn variety offers up fuzzy, hairy stems and leaves that are likewise underneath. In fact, the staghorn received its name because its branches are velvety like a buck’s antlers in late summer. Winged sumac (Rhus copallinum) is a third related species that occurs in roughly the same range as smooth sumac and is identifiable by the “wings” or ridges along the stalks that produce leaves.

Both Bryce, who is a taxidermist, and I have observed rubs on the trees as the bark is apparently quite aromatic to bucks. According to the book Forest Plants of the Southeast and Their Wildlife Uses, the fruits are eaten by deer, especially in winter after more desirable acorns are gone, and also by a wide range of small mammals and songbirds. I’ve watched cardinals and chickadees feeding on them in winter, and I have noted turkey scratching underneath sumacs growing in thickets, especially in late fall and winter.

Additionally, don’t let the word sumac dissuade you from eating these berries. Smooth, staghorn and winged sumac are not closely related to poison sumac (Toxicodendron vernix), which hosts white fruit, grows mostly in swampy environments, and has a much narrower distribution in the East.

When staghorn or smooth berries become ripe (in late summer or early fall depending on their location), Bryce uses a knife to sever the intact cluster from a branch but not before a preliminary act. 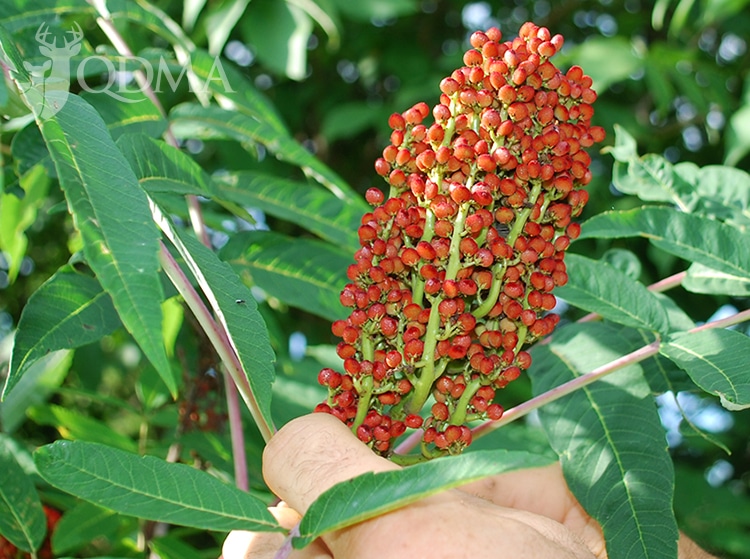 “I taste-test a seed from the different clusters of berries on the tree in order to tell which one has the best flavor,” he said. “After I have found a few that I like, I cut the clumps from the tree. I only pick a few bobs from each tree so they can use their remaining seeds to propagate more sumac colonies. You can use the clumps right away for lemonade or dry them for later.

“Making the lemonade is simple. All I do is put a clump or two in a quart of cold water and let steep for 12 to 24 hours. I’ve tried steeping the sumac both in the refrigerator and in the sun, but I’ve read that the refrigerator version retains more vitamin C. The citric taste comes from the fine hairs on the seeds, which contain malic acid. The cluster of berries are high in vitamin C.” 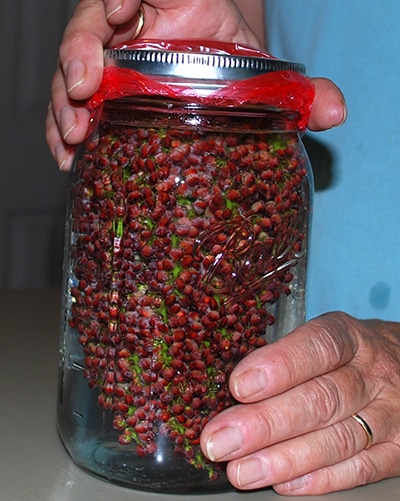 Bryce feels that the smooth sumac berries offer a more pleasing citrusy taste, especially when they ooze a white sap-like substance, which is why he was so animated when he pulled off that backroad. The drupes had a noticeable white “residue” on them.

As Bryce notes, sumac lemonade can be enjoyed throughout the year if you freeze or dry the clumps. But here’s a meal from my wife Elaine that works well during the late summer or early fall when the lemonade can be fresh and it’s time to use the last of your venison in the freezer, plus enjoy some fresh, summertime vegetables.

Remove from marinade and grill to desired doneness.  Serve with the Wineberry Mustard sauce.

Stir to combine. Serve with tenderloin.

Notes: This meal goes great with sautéed summer vegetables such as zucchini and yellow squash, tomatoes from the garden, and, of course, sumac lemonade. As we said in an earlier column, the wineberry is an invasive species that needs to be controlled by spraying – and eating. The red berries make superlative jam and by picking and eating them you keep this plant from spreading.