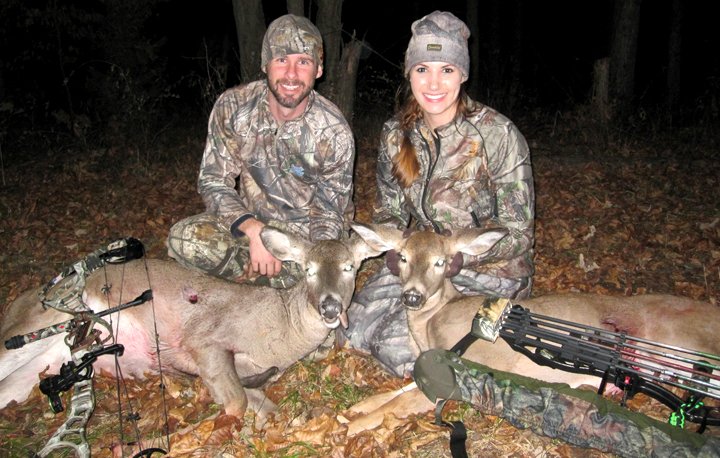 If there’s one thing the hunting industry pushes, it’s trophy bucks, trophy bucks, TROPHY BUCKS. I was caught up in this mindset when I first started hunting. As soon as I had a successful first bowhunting season, I determined I didn’t want to shoot anything unless it was a “wallhanger,” and I was going to fill my buck tag before I tried to shoot any does.

It only took a couple of frustrating hunting seasons for me to throw out this approach. I decided to concentrate on taking does, and this decision ended up making me a better bowhunter in several different ways. Only now, looking back, do I realize how much I gained by focusing on the does.

I’ve learned that one of most valuable things to a hunter is experience in the field. That is what originally made me turn to does. I needed to forget about giant antlers and concentrate on having more of those “moments of truth” when I release an arrow at an animal.

Waiting until after I filled my buck tag to shoot a doe didn’t work for several reasons. Some years I didn’t even kill a buck, so I never had the experience of drawing my bow and shooting an actual deer. Other years, when I did tag a buck, I found myself hunting for does in late season when temperatures are challenging and does jump at anything and everything, a result of weeks of hunting pressure. I once had a couple does coming down a trail toward me only to spook and scatter when a woodpecker flew over!

When pulling back on a doe, I would still shake and be filled with adrenaline, but I wasn’t overwhelmed by buck fever. Harvesting does helped me make those better shots and gain confidence, which is vital.

I remember my first perfect shot on a deer. It was a mature doe that was eating acorns. She really made me work for it, as I stood with my bow ready for about an hour waiting for her to close the distance. Hoping for “my shot,” I passed many shots that other hunters probably would have taken. My patience paid off. I was finally given a 17-yard broadside shot, and I was able to really think through the process, breathe, hold the pin on the right spot, and release smoothly. The doe died within sight, and I was so overjoyed I immediately started crying and calling my family to tell them about my perfect shot. I didn’t care that it wasn’t a big buck. Even today, my family says that doe was the most photographed doe ever!

No matter how much you practice, shooting a live animal is entirely different than shooting at a block or 3-D target. By getting more shot opportunities on real does, I started fine-tuning my shot placement on deer to get the right angle when shooting at close range from a treestand. I also discovered the little things that help me personally pull off a good shot.

For example, I love competitive 3-D shooting. Many 3-D targets teach you to play it close to the shoulder of an animal, since that is where the 10-ring is located. In moments of buck fever, when it can be so hard to concentrate, I resorted to what was natural to me, and I hit the two biggest bucks I have ever shot in the shoulder. Experience in the field shooting does taught me to stop focusing on the chest and line up my shot so that I get a good vital-area hit without risking a shoulder hit.

Of course by shooting does, you are also providing high-quality meat for your family, improving your buck:doe ratio, and – if needed where you hunt – helping reduce deer density to a level the habitat can support in healthy condition. This will improve the quality of your future hunting trips! (If you need additional guidance on determining the right number of does to harvest where you hunt, this article will help.)

Given a choice, does it matter if you take a mature doe or younger doe? It depends on your situation. If you have more deer than the habitat can support in good condition, take the mature doe. On average, an older doe produces more twins and triplets, and her fawns have higher survival rates. If you have the right deer density where you hunt, or even could support a few more deer, choose the younger doe. You’ll have less impact on population growth but still gain meat for the freezer.

One really cool item my family added to our hunting gear a few years ago was a game scale. We bought it for my dad’s birthday and started weighing all our deer before field dressing. Soon, the “weigh in” became an all-out competition for a year’s worth of bragging rights! We have a contest for the biggest buck (total antler inches plus weight) and the heaviest doe. We have so much fun with this!

All of a sudden the guys in my family were sizing up does and even scouting for the biggest ones! Taking more does was something I had been trying to get them into. Now everyone goes after “The Big Doe” each year! As fun as this has been, we have also gained a lot of knowledge from our game scale.

The first deer we weighed ended up being a 172-lb. doe. We knew this was a big doe but had no idea how it compared to others. We haven’t even come close to this weight since! We found an average mature doe in our area of Iowa weighs in the range of 145 to 153 pounds. To gain more weight than that, it seems to need the longer body frame some does carry. A 1 1/2-year-old (yearling) doe weighs in the range of 120 to 123 pounds, and a fawn (about 6 to 9 months old) weighs around 90 pounds. Weighing deer, recording this information and comparing the results has really helped us to be able to judge does much better in the field.

It’s Not Too Late!

If you haven’t started targeting does yet this season, get to it! It’s not too late! My family has harvested four does so far, and I took one of them. Going through the process of taking a deer with a bow in the current season will help me be that much more calm, focused and confident if and when my next opportunity comes along this season. And remember, if you put yourself where the does are during the rut, the bucks will be there too!

I’ve come a long way as a hunter over the years, and I have my experiences hunting does to thank for the well-rounded hunter I feel I’ve become. I’m extremely proud of every doe I sit behind for a photo. By the way, the best year both my husband and I had for taking does ended up also being the year we each harvested our largest bucks. Coincidence? I think not.

Jennifer Pudenz of Peru, Iowa, is co-owner of TrailCamTrophies.com, a website devoted to naming bucks photographed with trail-cameras. Jennifer is the former editor of The Iowa Sportsman and Family Fish & Game magazines. She has been shooting a bow since the age of 4 and grew up around bowhunting following the footsteps of her dad and brother. Today, Jennifer enjoys all forms of archery from 3-D shoots to bowfishing to bowhunting deer and turkey. Her new adventures include being introduced to gun hunting by her husband, Matt Pudenz, and she has harvested some of her first small game species, including rabbits and doves.