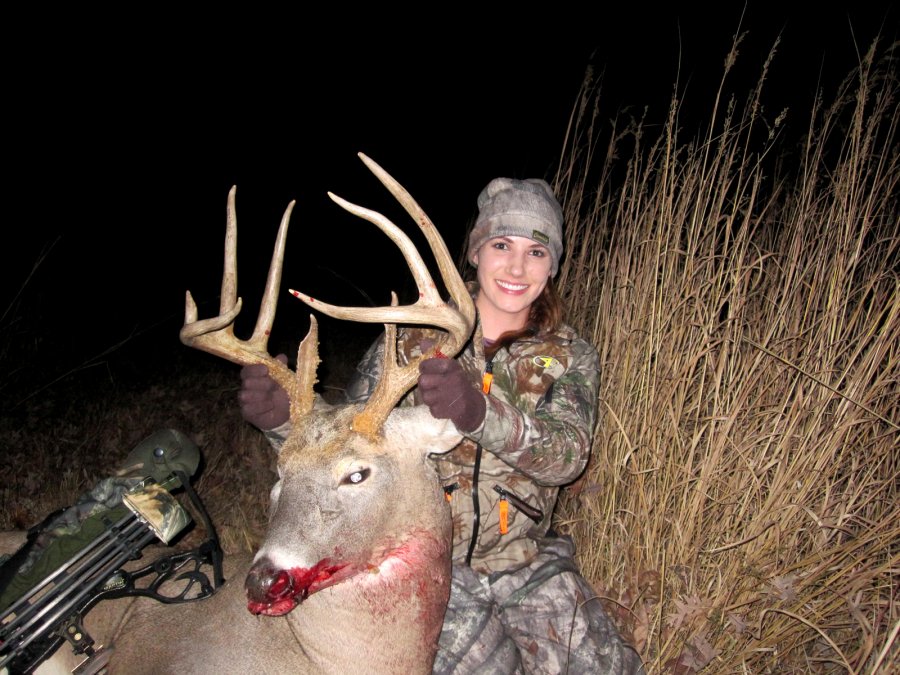 Just 170 years ago, a seemingly boundless prairie blanketed the Midwest, one of the largest ecosystems in the world, and it provided natural cover for whitetails and many other wildlife species. Today, only one tenth of one percent of the original tallgrass prairie remains, but the potential value for deer – and deer hunters – still exists. Mature bucks will spend more time during hunting hours in secure cover than foraging in an open food plot, so restoring or establishing native warm-season grasses (NWSG) can enhance your hunting success – as my family has found on our Iowa land.

Native grasses provide excellent cover for whitetails, including winter cover, fawning cover, and bedding cover. Deer do not eat prairie grasses, but with the right management the stand will also include native forbs, many of which are preferred forage species. In addition, a stand of NWSG lasts virtually forever once established and maintained with a few simple techniques.

There are many native warm-season grasses available. The most commonly planted are big bluestem, little bluestem, Indiangrass, side oats grama and switchgrass. The first four are commonly found in NWSG blends and are used widely across the Midwest. This blend contains a mixture of perennial, sod-forming bunch grasses that will range in growth from 18 inches to more than 60 inches tall and grow root structure of depths up to 12 feet.

Switchgrass is typically planted strictly as a cover for both deer and nesting birds and is often planted as a monoculture.

You don’t have to hunt in the Midwest to plant NWSG. Varieties are available that are adapted to almost every corner of the whitetail’s range. Contact your local office of the USDA Natural Resources Conservation Service to get advice on appropriate varieties and planting densities for your goals.

Deer want to feel safe, and providing good cover for bedding and travel near food sources is an excellent way to hold deer on your hunting land by helping them feel safe, especially during hunting season. My family makes our prairie work for us during hunting season by doing just that. We have a “Top Field” of planted crops – the highest area on our hunting land – that is surrounded by a fringe of native warm-season grasses and then oak timber. Bucks famously like to travel ridges where we hunt, so we maintain tallgrass prairie on the ridge that drops off from the Top Field. Down hill on each flank of the ridge are slopes of oak timber that then turn into more prairie just off a Bottom Field planted as a food plot.

Deer naturally use prairie for security cover, but to direct deer movements near treestands, we mow paths in the prairie grass where the prairie meets the timber, and the paths lead into food plots. Deer tend to emerge from the cover of the prairie or timber onto these paths and use them as highways. We then place our stands along these mowed paths, usually where the tree line, prairie path and food plot come together.

Besides giving deer an added sense of security on travel routes and near food sources, prairie cover gives hunters an unexpected advantage. This stuff is tall and thick. Looking into it from ground level, deer cannot see far through the native grasses. Does use this to their advantage during the chasing phase, when bucks are running them but they are not ready to breed. They can move “off the radar” in the prairie grasses. But from an elevated stand, we hunters can see pretty far and see what’s going on in the cover and on the paths. Because bucks cannot see far into the cover, it presents the perfect opportunity for calling them.

Late October of last year, the prairie was an important ingredient in my recipe for success. I climbed into the stand for an afternoon hunt, and it didn’t take me long to see that wildlife was stirring. First, a large group of gobblers emerged from the timber and followed the mowed path into the Top Field followed by, of all things, a woodchuck. Soon, does started filing into the field, and a 120-inch 8-point stepped out. Glassing him, I decided he was a great 2 1/2-year-old buck that I would pass.

As the evening went on, more young bucks came out to the field, sporadically chasing does in circles as they tried to feed. The 8-point had been chasing as well and was coming and going from the field. Across the field, a buck appeared once again. Thinking it was just the eight, I raised my binoculars to double check. The buck raised his head. Wow!

I didn’t have to take a second look to be sure he was mature. This contender soon pushed the smaller bucks away and chased a couple does off the field to the opposite side. I could only hope he’d reappear in time as the evening light was the fading fast. Luckily, just in time, he reappeared following some does across the field. But they were leading him to enter the timber perpendicular to me about 100 yards away.

I knew I had nothing to lose, so I slipped a grunt tube out of my pocket. I let out a medium-length grunt, and the buck immediately froze in place staring in my direction. Time stood still as the buck looked at me, looked back at the does, looked at me and, eventually, looked back to the does and continued walking. Giving it one more try, I gave one short grunt, and that was all the buck needed to hear.

Now in a full-out run directly toward me, he stopped 13 yards beneath me and below a branch to decide which way to turn. Here, two mowed paths converged from either side of the narrow strip of timber where my stand was located. Amazingly, my brother Ryan had set his trail-camera just on the other side of the path from my treestand, and the camera took a photo of the buck at that moment he was trying to decide (see it in the Gallery below). You could tell he was trying hard to see where the other buck was, but he couldn’t see past the prairie next to me or down into the oak timber behind me.

Suddenly, the buck turned on a dime and marched down the path right in front of me. I drew my bow quickly, but he had already passed my first shot window, so I paused for him to make it past a small tree. Then I stopped him with a “mah” in what I had already ranged as my 20-yard window. I found the spot I wanted and let the arrow go.

Rushing off the path into the tallgrass prairie, the buck was out of sight so quickly I didn’t see where the arrow hit, but I knew it sounded good like a chest shot. I listened carefully and heard what I thought could be the buck crashing, but I decided to play it safe, staying in the stand another hour and well past dark. I replayed over and over again in my head what just happened and, of course, prayed like crazy.

Finally back home, I waited a couple more hours. The guys got ready to help me, and luckily we didn’t have to go far. It was indeed his crash I had heard, and when we walked up on this buck, we couldn’t believe it. His body was enormous! Photos don’t do his size justice. He was the largest-bodied buck ever harvested by our family.

Weighing in at 260 pounds and gross/green-scoring 148-5/8 inches, this contender came looking for a fight, and if I didn’t have such good cover around me to block his vision, I feel certain this mature buck would not have fallen for the calls. He was 100 percent fooled and in a hurry to find the mysterious buck grunting from the prairie!

Jennifer Pudenz of Winterset, Iowa, is the co-owner of TrailCamTrophies.com. An extended version of this article, including more information about establishing and maintaining native warm-season grasses, will be published in an upcoming issue of QDMA’s Quality Whitetails magazine. This is Jennifer’s first article for QDMA.com.

Jennifer Pudenz of Peru, Iowa, is co-owner of TrailCamTrophies.com, a website devoted to naming bucks photographed with trail-cameras. Jennifer is the former editor of The Iowa Sportsman and Family Fish & Game magazines. She has been shooting a bow since the age of 4 and grew up around bowhunting following the footsteps of her dad and brother. Today, Jennifer enjoys all forms of archery from 3-D shoots to bowfishing to bowhunting deer and turkey. Her new adventures include being introduced to gun hunting by her husband, Matt Pudenz, and she has harvested some of her first small game species, including rabbits and doves.