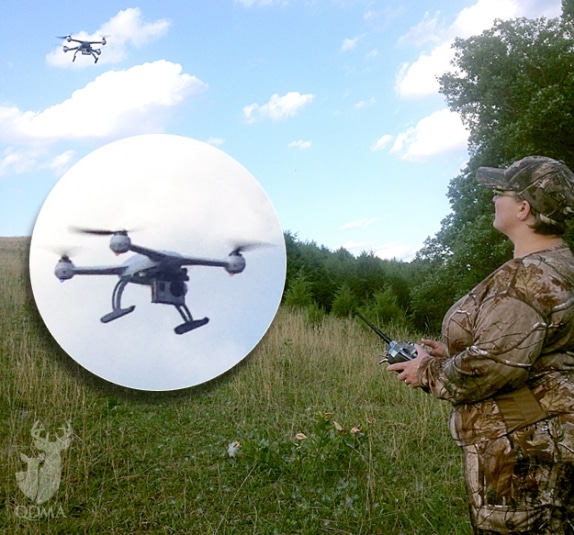 Remember when phones had cords and if you wanted to learn about something, you had to drive to the library and look it up? Technology has changed so fast over the last 20 years that we often forget the way things used to be. While the hands of time move a little slower when it comes to the outdoors, deer hunting has certainly not been immune to the technology boom.

The rise of the Internet, the popularity of the smartphone and other technological advancements in hunting equipment have impacted the way many of us spend our time in the field. Some hunters welcome this technology and embrace any gadget that increases their odds of success in the field. Others feel that technology is ruining the experience and taking away from the woodsmanship that hunters once relied on to be successful. In the end, we are each left to answer a question: How far is too far when it comes to hunting technology?

Probably the most extreme instance of today’s technology finding its way into the hunting industry was in 2005 when Texas entrepreneur John Lockwood introduced the world to “Internet hunting.” With his invention, Live Shot, a hunter (and I use that term loosely) could sit at home and remotely control a firearm mounted in a blind on a Texas ranch. When an animal showed up on the live video feed, the user could aim the gun and pull the trigger with the click of a mouse.

As you can imagine, the idea drew worldwide attention from both hunters and anti-hunters alike. Strangely, in this case, both groups were of the same opinion; this was a BAD idea! So bad, in fact, that many states scrambled to make the practice illegal, including Lockwood’s home state of Texas. As a result, Lockwood’s venture never got off the ground.

As if the Internet itself isn’t enough of a technological wonder, the majority of Americans now have access to it through small, handheld devices they carry in their pockets. The smartphone has certainly changed the way many of us hunt, mainly due to the massive assortment of applications (or apps) available at the touch of a button.

For the most part, these hunting apps haven’t caused any ethical quandaries. Most are focused on providing hunters with aerial photos of their hunting area, weather information, and a means of storing details of scouting and hunting trips for future reference. As cell phone technology continues to rapidly advance, however, apps are sure to come along that will push the boundaries of fair chase.

For instance, there is currently an app that attaches to your bow or gun site and allows you to see your target on your phone’s screen. Not really a big deal at this point, but what if that app could sync with a “smart gun” and automatically fire when your crosshairs reach the ideal shot placement on a deer? It could eliminate poor shots due to flinching or jerking the trigger, but would it be ethical?

What if a smartphone is developed that includes thermal imaging capability, allowing you to “see” deer in thick cover or at long distances that you would have never been able to spot with your naked eyes? Would you welcome the technology or speak out against it? It may sound a little far-fetched, but “smartphones” were far-fetched just 10 years ago!

Over the last 20 years, probably no other piece of technology has changed the way we deer hunt more than the trail-camera. Deer hunters love their trail-cameras, and advancing technology has resulted in models that are smaller, higher in resolution, with longer battery life than ever before. There are even cameras on the market now that can instantly send the pictures to your cell phone in the form of a text or e-mail. How’s that for high-tech scouting?!

While it’s hard to say where technology will take trail-cameras next, it wouldn’t be hard to imagine one that offers a 360-degree view that provides a live feed accessible 24/7 from your smartphone or computer, similar to some of today’s home security cameras. Or what if your trail-cameras, working in conjunction with a cell phone app, could actually catalog individual bucks by “facial recognition” and, based on when and where the buck is photographed across the property, could tell you exactly when to hunt a particular stand or where to place a stand? It sounds crazy, but the technology is already in place for someone to develop just such a camera and app.

The latest technology controversy within the hunting community has centered on our newfound fascination with drones. Originally developed for military applications, drones have gotten smaller and much more affordable for the average person. In fact, for a few hundred bucks you can get your own drone, slap a point-of-view (POV) camera on it, and you are ready for some aerial scouting.

While their use for hunting is more talk than practice at this point, several states have already been proactive in outlawing their use for hunting, including Colorado, Montana and Alaska. Much like the Live Shot case, there seems to be little support for their hunting use at this point in the game, but as the drones continue to become cheaper and more common, the subject is sure to resurface.

HOW FAR IS TOO FAR?

It has been said that the only thing constant in life is change, and with technology rapidly advancing, we are sure to continue to see more changes in the way we hunt. In most cases, it will be up to each of us individually to decide how far is too far when it comes to hunting technology. Some inventions will come along – such as Lockwood’s Live Shot – that fall so far outside of the bounds of fair chase that there will be little support amongst hunters. Other ideas – such as the use of smartphone apps and high-tech trail-cameras – will have their share of supporters and opposition.

In the end, no technology can change the core of what hunting is all about: a chance to escape into the great outdoors, to participate in nature, to match wits with the keen senses of our quarry, and to fulfill our roll as predator and provider by putting meat on the table. Even technology can’t mess that up!

What is your take on hunting technology? At what point do these gadgets begin doing more of the hunting than their owner? Are their any hunting gadgets that you can’t live without, or any that you refuse to use?