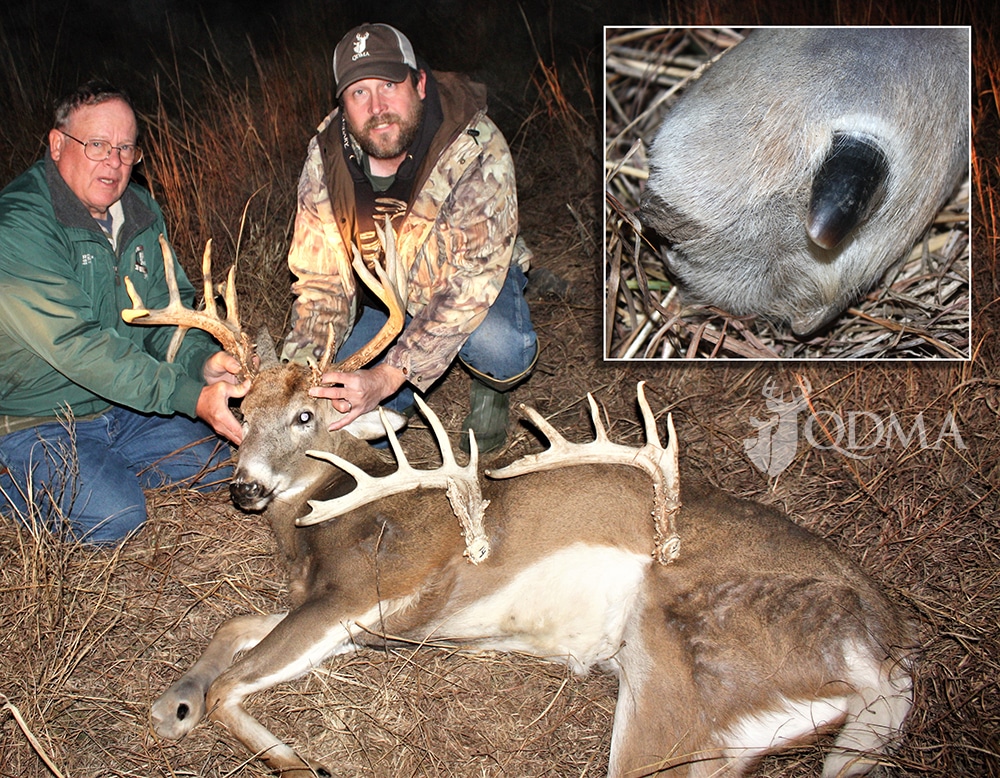 Tim Donges, a QDMA Life Member from Kansas, is watching bucks die of an apparent outbreak of a disease known as “footrot.” Healthy bucks he had watched during the 2016 hunting season started appearing in trail-camera photos with crippling hoof problems in December.

“I just put down a big non-typical on Christmas Eve, under instruction from the state wildlife agency,” Tim said. “He could hardly walk. I watched him go down on his front knees. He laid down two more times before I shot him. It was really sad to see.”

If you suspect a case of footrot where you hunt, QDMA recommends you turn off or remove automatic feeders that congregate deer, or at least relocate them to new, well-drained sites where bacterial spread will be reduced.

The buck is seen in the photo above with Tim (right) and his dad, Bill, along with the buck’s sheds from two previous seasons. The buck field-dressed 135 pounds, almost 50 pounds lighter than most bucks of the same age at this location, Tim said. This was the second buck Tim confirmed dead on his Kansas hunting land that was suffering with hoof problems. The first he found dead a week earlier. Another buck he had been watching on camera has vanished and hasn’t been seen in weeks, and a fourth is still alive but also with visible hoof issues.

Kansas Department of Wildlife, Parks and Tourism (KDWPT) submitted the hoofs recovered from two of the bucks for testing by the Southeast Cooperative Wildlife Disease Study (SCWDS) at the University of Georgia, but results were not yet available at the time of this report on January 3, 2017. It is likely, however, that testing will reveal infection by Fusobacterium necrophorum – known informally as “footrot.”

Footrot is a contagious hoof infection commonly found in sheep, goats, and cattle but also rarely in whitetails, according to SCWDS. As the name suggests, the foot swells and can actually rot away (the bacteria produce a toxin that can block a deer’s natural defenses against infection). Outbreaks typically occur in wet conditions and especially where animals congregate in high densities, such as around feeders. Outbreaks are often observed in late fall to early winter when animals congregate around limited food sources. Bacteria build up in damp soil at these sites and infect deer through cuts or abrasions in the feet. Softened hooves caused by sustained wet weather may also contribute to increased infection rates. Discussion on the Facebook page of QDMA’s Bluestem Branch in Kansas suggested other hunters are seeing symptoms like those Tim has documented.

QDMA is encouraging Kansas hunters who witness signs of footrot where they hunt to report it to Shane Hesting, KDWPT Disease Coordinator. Hunters in other states who suspect footrot can contact their state’s Deer Project Leader.

If you suspect a case of footrot in deer where you hunt, QDMA recommends you turn off or remove automatic feeders that congregate deer, or at least relocate them to new, well-drained sites where bacterial spread will be reduced. Bacterial growth is greatest above 40 degrees F, so the onset of winter (or drier weather) usually stops footrot issues.