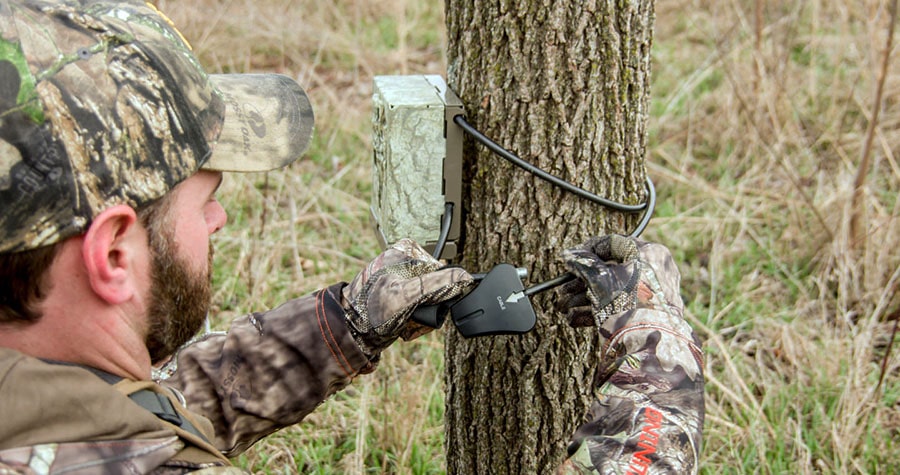 It seems not a day goes by where I don’t hear of someone getting some piece of hunting equipment stolen. More times than not, it’s a treestand or trail-camera. Keeping your gear safe from thieves can be a challenge regardless of where you hunt, but public land hunters like myself have to be extra cautious. Over the years, however, I’ve decided that the intel I gain from running cameras on public lands far outweighs the associated risk. And while there’s no way to make a trail-camera theft-proof, there are certainly a few steps you can take to increase the odds of it being there when you return. Here are four:

Get off the beaten path

My first rule when running trail cameras on public land is to keep them off the beaten path. While it may be tempting to hang one on that nearby food plot, doing so will likely end badly for you. Research by Penn State University found that the vast majority of deer hunters don’t venture over 1/3 mile from a road. That means getting at least a half-mile from any point of access should greatly reduce the risk of theft even if you did nothing else.

Another tip I’ve learned along the way is to place your public land trail-cameras high on the tree. I typically carry a treestand climbing stick or two with me when running trail-cameras so I can mount the camera 10 to 12 feet off the ground, angled down on a trail, creek crossing or some type of pinch point. This keeps the camera out of a passerby’s normal line-of-sight and, if it does get spotted, being elevated will make it harder for a would-be thief to take it.

Every trail-camera placed on public land should be firmly locked to the tree with a python-style cable lock. This is by far your best line of defense. Does it guarantee your camera will not get stolen? Absolutely not. But at a minimum the person would have to make a return trip with bolt cutters or a saw to get it down. When combined with the previous two tips, a thief would REALLY have to want your camera to go through all the trouble of making two trips into the backwoods.

Go cheap (but not too cheap!)

Lastly, when placing trail-cameras on public lands, I stick to camera models in the $100 or cheaper price range. Even quality camera companies like Moultrie offer affordable options, and if you’ll wait until after deer season, you can often find them on clearance at some of the big-box retailers. Again, this won’t stop someone from stealing them, but I would lose a lot less sleep over a stolen $100 camera than one that cost $400.

I’ve met a lot of deer hunters who forego the benefits of running trail-cameras on public land because they fear having their cameras stolen. The threat is real, and I‘d be lying if I said it doesn’t cross my mind every time I head out to check my cameras. But with the techniques discussed here, you can minimize the risk. The information you gain just may be the edge you need to put venison in the freezer and a shoulder mount on the wall this season.