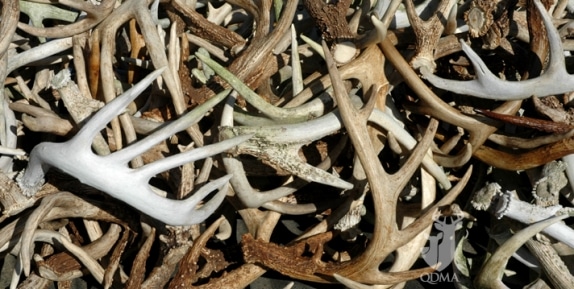 It was late March in northern Pennsylvania before the snow had finally receded enough to let me get in the shed hunting game. My kids and I went for the first time on March 25. The first food plot we checked was 90 percent covered in snow, but the second, third and fourth plots were mostly snow free or at least the snow was shallow enough to allow us to see antlers in them. Four plots and two fields later we hadn’t found an antler but we did find some deer bones, some recently excavated woodpecker holes in a red pine, a whole lot of deer scat, and most importantly, some quality family time.

Our stated goal was a shed antler – at least one and hopefully more – because we are captivated by antlers. My family likes to see them, hold them, study them, photograph them, display them, and hunt them. I guess that fascination stems from our ancestors, as some of the earliest art consisted of cave drawings of bucks, or at least antlered animals.

If you’re reading this I’m guessing you like antlers too, so here is some interesting information on them and the factors affecting their growth.

Antlers are the fastest growing true bone in nature. They start growing in spring and continue through late summer. While growing, antlers are soft, warm to the touch (because of the blood supply) and covered with velvet. They harden in late summer/early fall, and bucks shed their velvet in response to a reduction in daylight hours and increasing testosterone levels. Bucks then cast their antlers in late winter/early spring in response to increasing daylight and decreasing testosterone levels.

Antlers are often incorrectly referred to as “horns,” but they are distinctly different. Antlers grow from the tip and are shed annually (luckily for us) while horns grow from the base and grow for the life of the animal.

Florida is not known for producing large-bodied or large-antlered deer. Bergman’s Rule states that animals within a species get smaller as you get closer to the equator, and sandy soils produce deer that average lower body weights and lower-scoring antlers than many regions of the country. However, public land in central Florida has produced deer weighing nearly 200 pounds with antler spreads exceeding 20 inches. These bucks were allowed to mature in balanced deer herds in properly managed habitats supplemented with high-quality food plots. A large percentage of deer killed in higher quality habitats in northern environments never reach the above mentioned weight or antler parameters because they are harvested at early ages or are nutritionally limited.

Genetic improvements to antlers are extremely difficult, if not impossible, in wild populations and are often overrated in antler conversations. Selecting specific antler traits is possible through controlled breeding in penned situations because the parents can be chosen. However, it’s not that simple in the wild since predicting a buck’s reproductive success is not an easy task.

What is the most important trait for a buck to win the opportunity to breed? Is it large antlers? How about advanced age? Numerous research projects have looked at this, and current research at Auburn University suggests body size is the best predictor of breeding success. This doesn’t mean smaller bucks don’t breed, as Auburn’s study and others have shown bucks from all age classes (including fawns) can and will successfully breed does, and even in populations with good age structure young bucks may breed 25 to 30 percent of the does. Rather it simply suggests body size is much more important than antler size or age to siring more fawns.

Genetic improvements are also difficult because 25 to nearly 50 percent of twin fawns may have different fathers. These facts demonstrate the complexities involved with attempting genetic improvement in wild populations and show why culling young bucks is ill advised. As managers, we do best by balancing deer herds with their habitats, improving buck age structures, and putting the most mature bucks in the population as possible. Then we can relax and reap the benefits of our management efforts.

Antlers keep deer enthusiasts busy year round. We hunt for sheds in spring, watch them grow all summer, photograph and chase them all fall, and dream about how big they’ll be next year during winter. Be sure to spend time afield each season with family and friends, and get out there now as there’s a big shed just waiting for you to find it!