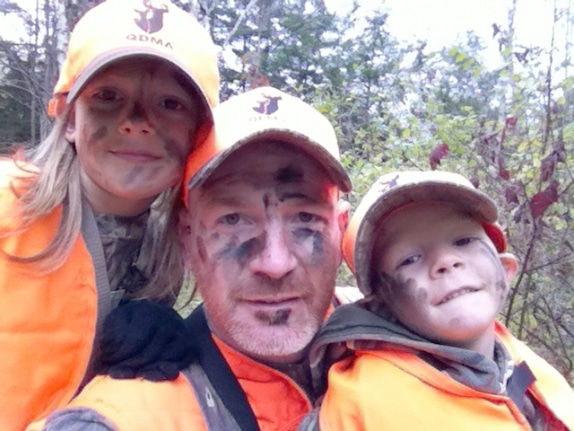 We hunt for many reasons – to be with family and friends, to spend time with nature, to provide meat for the table, and because it is fun. That last reason should not be overlooked when introducing a new deer hunter to this wonderful pastime, especially when that new hunter is a youth. Families Afield programs have removed barriers for more than 1 million new hunters to go afield since 2006. That is important for the future of hunting, and a great way to ensure these new hunters remain in the fold is to make it fun for them.

I have a young daughter who went on her first hunt with me when she was 2 years old. In November 2008, being securely bundled in a chest pack, Katie participated in a bear drive. I wasn’t carrying my rifle, and our crew did not shoot a bear that morning, but there’s no denying we were both an integral part of the hunt – me as a driver and Katie as a future hunter.

Katie has been on numerous hunts with me since that day.

I firmly believe if you want someone to understand and enjoy the outdoors, then you take them hunting and teach them about wildlife and wild places. Katie has spent more days in the woods with me than I can count, and every time it’s because she wanted to go, and in most cases was asking (occasionally almost begging) to go. And she likes to go because we have fun in the woods.

We have a great relationship, and I wouldn’t trade Katie for everything in the world. However, I have several serious hunting friends who are great fathers whose kids care almost nothing about going to the woods with them. Given that I am not the brightest guy around, but I am so thankful my daughter wants to hunt with me as much as she does, I figured I’d better find out exactly what we did to make it enjoyable so she wants to keep going.

So I simply asked her why she likes to go and she said, “Because it is fun.” I smiled and then asked her why it was fun, and I’m guessing many will be amazed by her answers.

She didn’t say “because we always shoot something.” She’s been by my side when I’ve shot a bear and some deer, but those hunts are by far the exception to the norm.

She didn’t say “because we always see deer or bear or turkeys.” She’s seen a lot of these animals in the woods, but we’ve walked home many times after dark after seeing none of them.

What she did say made me smile and realize once again how lucky I am to have done a few things right (mostly by accident) introducing her to hunting and how fortunate I am to have her as my hunting buddy. I’ll share her answers in hopes they can help you be as lucky in mentoring a youth or new hunter as I was with her.

“Hunting is fun because we play cards, word search and we color in the blind while waiting for deer. We share snacks, and play games on which bird is singing, and an even better game is guessing which bird will sing next,” Katie said. Her songbird vocabulary is limited so we often guess whether the next bird we hear will be a blue jay, crow, or “other.” She can easily identify a blue jay, crow, or bird that’s clearly not either of those so that’s fun for her.

She also said she likes to play “where will the first (and next) deer come from.” Slow day in the woods with few or no deer sightings? We’ve had those too, so we change to “where will the next squirrel come from.” I’ll admit that few things make her feel more like a true hunter than when she beats me at this, and few things hone her woodsmen’s skills like being engaged and playing these games. 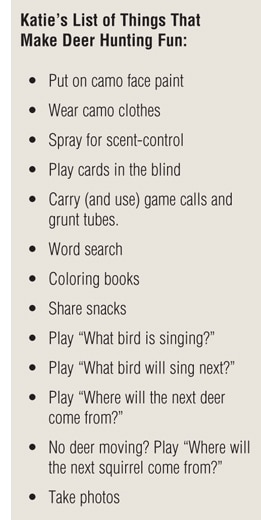 Katie also said hunting was fun because, “We paint our faces, put on hunting (camouflage or fluorescent orange) clothes, and spray ourselves so deer can’t smell us.” No one taking a youth hunting should overlook the importance of these items. To this day in Katie’s mind if we skip one of these steps then we aren’t really hunting. It’s a mental thing, and doing each of these put her in a different place – a very good place. It’s amazing how much quieter her feet are and how much more focused her eyes are when her face contains green, black and brown stripes. We can be sitting against a tree or in a blind, but if we didn’t camouflage our faces or spray our clothes then we are only half-heartedly watching for deer, not truly hunting them. Sometimes I’m not sure which of us learns more on our hunts together.

Notice at no point do our hunts involve the statement, “Sit down, be quiet and don’t move.” Where’s the fun in that? Sure, I teach her patience and how to be quiet, but I also teach her how and when to move, and I encourage her to explore the woods. “I wonder what’s under that log, over that ridge, and behind that blow down?” are common topics of conversation for us. Are you too worried about spooking a deer? Quit worrying – they’ll learn more about being a good woodsman and a good hunter by spooking a few deer than by sitting still and being quiet.

Regarding pictures, we’ve taken shots of everything from her to me to buck rubs, funny looking trees and pretty leaves. Each photo connects her (and me) to the hunt and time spent together in the woods. This past season we made a point to take a picture of her on every hunt sitting in a blind or on stand (the photo above shows me and Katie, along with Katie’s little brother Bo, on a recent hunt). October to December is a short time frame for an adult, but you wouldn’t believe the changes in a 7-year-old during that span. By the end of rifle season she looked older, bigger, and more seasoned. My little girl a more seasoned hunter? How is that possible? Successful educators would tell you kids – and possibly adults – learn best when they’re engaged and having fun. Maybe there’s a lesson there for us as hunting mentors.

This year let’s all take a youth hunting and make sure we make it fun for them. It’s not just about shooting a deer, rather it is about painting our faces, learning about nature, and having fun in the woods. That “fun” part is what will keep them coming back. I challenge all of my hunting brethren to take a new hunter to the woods this year. If that new hunter also is fortunate enough to get their first deer, share the photos with our Rack Pack’s #FirstDeer program.

Have fun, and for goodness sakes, don’t forget the face paint!