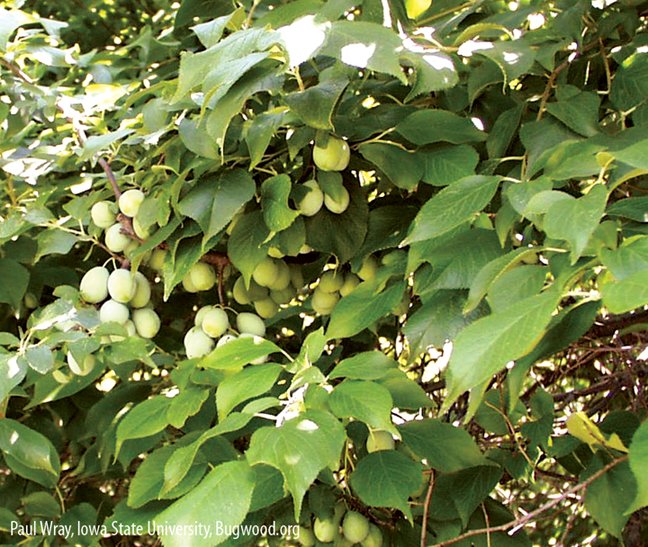 One of the most limiting factors I’ve noticed on undermanaged hunting properties is the lack of good escape and security cover. Another item frequently absent is an adequate proportion, variety and quality of soft mast. From fawn through adulthood, deer use and require both. So begs the question, what plant provides deer a high-preference soft mast food source and year round low-growing cover? American plum fits that description perfectly and is a native plant that overlaps the bulk of the whitetail’s range.

American plum (Prunus americana) is a deciduous fruit-bearing shrub to small tree (15 to 25 feet tall) that is winter hardy, has a broad crown and, most importantly, is thicket-forming. It takes on the shrubby form most often, with multiple leaders, but does grow as a small, single-stemmed tree in southern Alabama, Georgia, and Florida. As a shrub, it suckers freely and can form large, dense colonies. It is a woodland or prairie species and grows on a wide variety of soils (rocky to sandy; pH 5.5 to 7.5) along fencerows, wooded draws, riparian areas, forest edges and in old fields.

The leaves are simple, oval, alternate, about 4 inches long, and have finely-toothed edges. In autumn, they turn a brilliant yellow to red. Like other Prunus species, American plum has glossy, reddish-brown twigs with short spur shoots connecting the flowers to the main branches, sometimes forming thorns. In addition, its bark starts out smooth with horizontal lenticels, later becoming rough with irregular ridges. Fragrant, white flowers appear in groups of two to five in the early spring, usually before the foliage buds out, and are followed by edible, round, 1-inch red plums, with a bright yellow pulp, that ripen in early summer. Honeybees are their principal pollinator. Good fruit and seed crops are produced about every other year, and in one study American plums produced an average of 1.8 quarts of fruit per plant, with a crop failure occurring in only one of four years.

Many herbivores, including white-tailed deer, mule deer, porcupines, and cottontails, will browse American plum. Its browse is highly digestible (86 percent) and has moderate levels of crude protein (13.9 percent). The plums are also sought out and eaten by various wildlife species, including grouse, squirrels, deer, foxes, coyotes, opossums, raccoons, and black bears. Its fruits are low in protein, moderate in calcium and phosphorus content, and high in Vitamin C and energy (sugars). This becomes important for times when deer need to put on weight quickly and when they are expending the most energy – during the late summer and fall. American plum thickets also provide thermal and escape cover for many birds and mammals besides deer; and offer excellent nesting habitat for several game bird species, particularly those preferring edges or early succession habitat like sharp-tailed grouse, northern bobwhites and wild turkeys.

Since it forms thickets, American plum is often used for erosion control, windbreaks, shelterbelts and wildlife plantings. Landowners should have no difficulty finding wild plums in either bareroot or containerized forms for sale. They should be spaced roughly 6 to 10 feet apart when planted from the seedling stage, and survival generally is very good. Although somewhat tolerant of weed and grass competition, they will develop faster with good weed control and proper irrigation. Other wild plum varieties exist, including chickasaw plum (P. angustifolia), flatwoods plum (P. umbellata), wildgoose plum (P. munsoniana), Mexican plum (P. mexicana), and many more; managers should plant according to what is endemic to their area.

Burning American plum communities regularly helps maintain the patchwork of woodlands and prairie that helps them flourish, provides habitat for new growth to become established, and provides the nutrient enrichment to help increase existing fruit production. The branches of wild plum can also be pruned or cut back to increase growth.