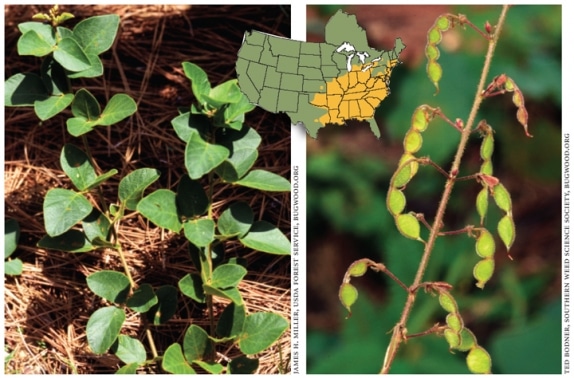 If someone were to ask you to name the most palatable, high-quality, warm-season forage you could plant in your food plot to satisfy the elevated summer protein demands for white-tailed deer, how would you answer? Most of us would immediately shout, “Soybeans!” Well, meet one of Mother Nature’s substitutes. Desmodiums, better known as a large group of plants called “beggar’s lice,” “tick-trefoil,” or “stick-tights,” deliver comparable nutritional value as soybeans, are naturally-occurring nitrogen-fixing legumes available to deer at the same time as soybeans, and are among the most important native forage species for a variety of wildlife across eastern North America.

To show the breadth of impact that beggar’s lice have on wildlife, botanists have identified nearly 75 individual species within this genus, and examples can be found from Canada to Mexico. In the Northeastern U.S., I’m personally accustomed to pulling the small, hooked pod segments from showy tick-trefoil off my hunting clothes, which grows primarily in the central and northern United States and southern Canada. However, let’s take a look at one of the more common southeastern beggar’s lice varieties.

All of the Desmodium species are considered valuable wildlife plants, and stiff tick-trefoil is no exception. In the Southeast, it ranks as one of the most important species in the diet of northern bobwhite, is used heavily by wild turkey and ruffed grouse, and is a preferred browse for white-tailed deer. For comparison, while row-crop soybeans consistently maintain crude protein and fiber levels of anywhere from 20 to 40 and 20 to 28 percent, at least in one study samples of stiff tick-trefoil were analyzed and researchers determined it offered the same nutritional values at 28.2 and 20.7 percent, respectively. Stiff tick-trefoil is also an important pollinator plant. Humming birds frequent the brightly colored blooms, along with numerous insects. It is a preferred host of the hoary edge butterfly; likewise, digger bees, bumblebees, and leaf-cutting bees can be found working blooms of stiff tick-trefoil, and many skipper caterpillars, moths, beetles, stink bugs and aphids will feed on the foliage, flowers, seedpods, or plant juices.

Stiff tick-trefoil, like most of the other beggar’s lice, is an upright, perennial forb that has alternate, three-leaflet leaves with stipules (like small “earlobes”) at the base of each leaf petiole and at the base of each leaflet. While leaflets can vary from a very round to a skinny, long shape, this trifoliate configuration is a distinct characteristic of all beggar’s lice varieties. For identification purposes, the Lespedeza species have a similar leaf/leaflet pattern, but lack the “earlobe” at the base of the leaflet.

Stiff tick-trefoil will grow up to 2- to 3½-feet tall, branching occasionally, and its slender, densely hairy, green-brown stem will remain rigid but progressively lean from summer to winter. Of course being a legume, it carries a pea-like flower and segmented flat bean pods, which have a tendency to stick to clothes and fur quite easily with tiny hooked hairs for the purpose of seed dispersal. It prefers partial sun, moderately dry conditions, and a sandy or rocky soil. Stiff tick-trefoil often inhabits open forests post timber harvest or prescribed burn, and is also common along woodland edges, sandy savannas, rocky glades and rights-of-way.

While many of the beggar’s lice occur naturally, and wild or prescribed fires or other disturbance tend to increase populations, managers can seed or plant native beggar’s lice varieties quite easily. Seeds should be sown in the spring or early fall ¼-inch deep at about 3 to 4 pounds pure live seed (PLS) per acre. Because seedlings are fairly vigorous, new plantings can be established quickly, making most beggar’s lice especially useful in mixtures with warm-season grasses (many of which do not produce ground cover rapidly). Being a legume, all of the beggar’s lice plants will require little nitrogen; so unless a soil test indicates a deficiency of P and/or K, fertilizer should not be necessary during the establishment year. Overall, to maintain the plantings and reduce weed competition, mow at a height that will not affect the seedlings and/or choose the correct herbicide weed control application to encourage a good stand.