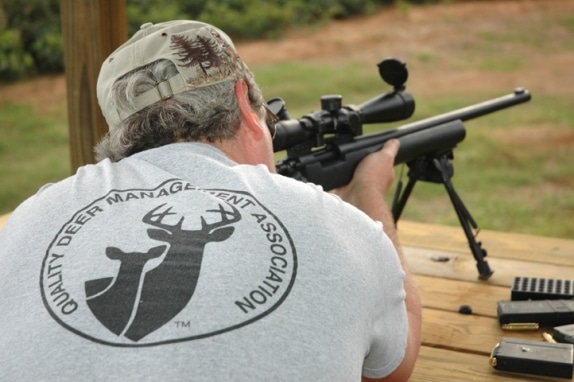 My friend John came to see me one Saturday to show me the gun he had just inherited from his Uncle Joe. It was a nice old Winchester Model 94 chambered for 30-30. John told me his Uncle must have killed 100 deer with that gun, so naturally he was very excited to own it. He asked me if I’d help him get it sighted in and work with him so he would be ready for deer season. I’m always a sucker to help anyone who wants to improve their hunting skills, so we got right on it. After putting up a 100-yard target and getting everything set up at the bench rest, we were ready to see just how old Uncle Joe laid all those deer low.

This particular gun had a fixed four-power scope mounted with a side-mount bracket. Because it was a lever action and the cartridges eject upward, the scope was a bit high for my taste, but heck, it was good enough for Uncle Joe so who was I to complain?

The first shot went about a foot low, so we simply adjusted the scope to hit a foot higher. The next shot was pretty close to the elevation we wanted but a bit left. It was close enough so we simply fired two more shots after letting the barrel cool between shots. As we approached the target, I saw that at least 4 inches separated those three shots. Being sure of my bench techniques and my ability to call my shot, I knew it was the gun. I wondered out loud if maybe Uncle Joe shot a different brand or load of ammunition, but John assured me these were the very same ones Uncle Joe always shot. Well, we sure can’t expect this gun to group a half minute of angle, but good grief we should do better than four!

The trigger was well over my preferred max of 4 pounds, and the scope was only four-power. I recommended to John that he have the trigger worked and maybe buy a new scope. These great old guns are capable of a minute of angle with a little work. He told me money was tight and, besides, Uncle Joe killed 100 deer with it! I suggested maybe Uncle Joe shot at 500 deer to kill 100. Again John assured me his Uncle rarely shot more than once to kill a deer.

At this point I’m thinking John has Uncle Joe on a pedestal and isn’t capable of allowing him to be a mere mortal. I asked John how his Uncle shot these deer. Did he sit in a blind and shoot off a rest of some sort, or did he always manage to get prone before the shots? No, John said he shot most of them off-hand. Now I had no choice but to explain to John about the physics of shooting. I explained that because of our being human, as soon as a gun is off the bench it is generally less accurate by a factor of about five if shot from a kneeling or sitting position, and it is less accurate by a factor of about 10 when shot off-hand. Some simple math now calculates that the best Old Joe could do sitting or kneeling is 20 inches, and his best off-hand would be 40 inches at 100 yards! I explained to him this is the reason we should always strive for the tightest group possible off the bench. If that had been a one-minute gun, the human error factor isn’t nearly so daunting. A 5-inch group sitting or kneeling and a 10-inch group off-hand will kill a lot of deer at 100 yards.

Poor John was getting frustrated now because he really wanted to use his favorite Uncle’s gun to hunt deer that fall, but on the other hand he didn’t want to wound them. So I worked the math the other direction to see just where that gun could be lethal. A four-minute gun at a hundred yards means 2 inches at 50 yards. A human error factor of five (kneeling or sitting) would mean a 10-inch group at 50 yards, and that should get the vitals of a deer. The human error factor of 10 (off-hand) would be 20 inches, so this 30-30 should not be used off-hand even at 50 yards. At 25 yards our four-minute gun will shoot 1-inch groups. Now we can safely shoot off-hand even with the multiplier of 10 and be reasonably sure of humane kills.

So my recommendation to John was this: If you practice your rifle skills, you should be okay shooting off-hand out to 25 yards, sitting or kneeling out to 50 yards, and you could even go out to 100 yards as long as you can get a solid rest or get down to a prone position.

After I was done explaining all this to John, he said, “You know, I remember Uncle Joe telling me he never shot at a deer till he could smell it.”

God bless Uncle Joe and all the hunters who know the limits of their rifles.