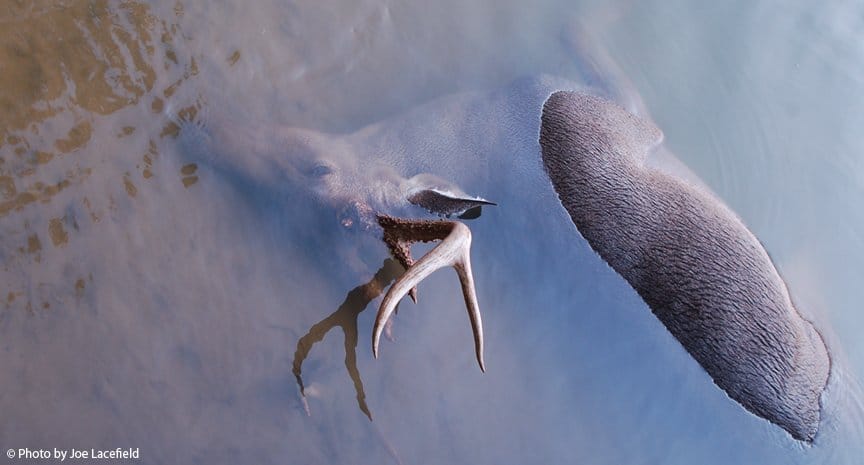 During the summer of 2011, regional outbreaks of hemorrhagic disease (HD) in white-tailed deer stole the headlines throughout portions of the Unites States. This – occurring just four years after the HD epidemic in 2007, the worst year for the disease in at least 50 years – helped to affirm it as the most significant viral disease impacting whitetails annually. The peak season for HD is late summer to early fall, so here’s a guide to understanding and identifying HD in case it strikes deer where you hunt.

HD is an infectious, blood-borne disease of deer and elk that is transmitted by biting midges or flies, which are most active in late summer; it is caused by either of two closely related viruses, epizootic hemorrhagic disease (EHD) virus or bluetongue (BTV) virus. Since the symptoms produced by both of these viruses are relatively indistinguishable, the general term “HD” is often used. The Southeast is most affected and outbreaks occur annually, but the disease ranges as far north as New York and New Jersey in the Northeast, across the Midwest to Montana and southern Canada, and to Washington, Oregon and California on the west coast.

Initially, infected deer may appear normal or show mild signs of illness. Five to 10 days following exposure, animals may appear weak; feverish; have a swollen head, neck, tongue or eyelids; have difficulty breathing or lose their appetite and fear of man. Deer may have ulcers on their tongue, an eroded dental pad (in the roof of the mouth), or interrupted hoof growth. Deer not previously exposed to the disease often die within five to 10 days. Mule deer, bighorn sheep and pronghorn antelope are also susceptible to HD. Even though chronic wasting disease and HD share many symptoms, the two aren’t related. Chronic wasting disease is caused by abnormal prions and is neither viral nor bacterial, while HD is caused by a virus.

Deer that survive HD develop immunity to the disease, and does may pass temporary immunity to their fawns through their milk. Most deer that die do so around water because they develop high fevers and seek water to cool their bodies.

Since the disease is spread by insects, there is little we can do to prevent it, and outbreaks will end with the onset of cold weather. A good, hard frost will kill or drive the majority of insects responsible for the disease into winter inactivity.

The severity of disease outbreaks is influenced by the number of deer exhibiting immunity to the disease, the virulence of the infecting virus, the number of livestock nearby (because they can carry the virus), and the abundance of midge vectors. Herd density may also play a role as high-density herds may have higher mortality rates, but the relationship between deer density to the severity of HD is not clear-cut. The disease occurs annually, but its distribution and severity are highly variable.

Regional deer herds are impacted differently. According to The Southeastern Cooperative Wildlife Disease Study (SCWDS), in coastal regions of the Southeast, most adult deer have antibodies to the disease and disease outbreaks are rare. In piedmont regions, many adult deer have antibodies but disease outbreaks occur every five to 10 years. In mountainous regions, antibodies are rarely formed in deer and disease tends to occur in sporadic outbreaks, often with higher death losses.

At this time, SCWDS has not yet issued their full report on the 2011 outbreak, but there appears to have been significant activity in a few specific regions of the country, namely in eastern Kansas, as well as eastern Pennsylvania, northern New Jersey and southeastern New York. Reports also state that Montana, North Dakota, South Dakota and Wyoming were hit very hard (see the map in the Gallery below). In fact, the mortality was extensive enough in North Dakota that the Department of Game and Fish suspended sales of deer hunting licenses for three deer management units (DMUs) and offered refunds for 13,000 licenses sold to hunters in 11 DMUs in the western portion of the state.

Despite the severity of the 2007 and 2011 outbreaks, the impact was minor on a population scale. Deer have flourished in North America despite being subjected to repeated outbreaks of HD for at least a century that we know of, and probably much longer. Even so, when Quality Deer Managers work diligently over multiple seasons to increase numbers of mature bucks and balance the sex ratio, finding even one mature buck or scores of dead antlerless deer that are victims of HD can be frustrating. Although HD’s impact on deer populations is minor on a nationwide scale, it can be locally severe especially in areas where the disease is relatively new. The QDMA recommends hunters who experience significant losses closely monitor population indicators to determine if reducing the local antlerless harvest will be necessary in future seasons.

The most important thing to remember about HD is to report any evidence you find to the nearest office of your state’s wildlife management agency. Deer that behave strangely or appear sick, or deer that are dead of unknown causes – especially in large numbers and/or when found in or near water – should be reported. The more information that can be gathered about this disease, the more we can understand its impact on whitetails.

To learn more about HD, view a brochure prepared by SCWDS.