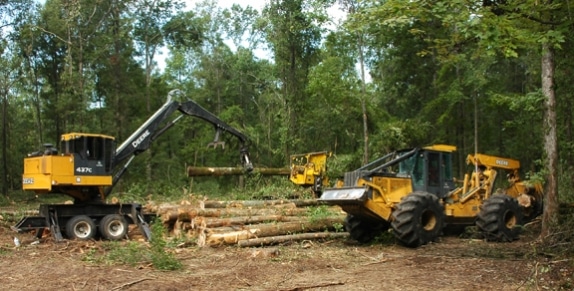 If you lease hunting land, few sights are more disheartening than the appearance of skidders, log loaders and logging trucks, especially just before or during hunting season. If you own your hunting land, you are the one who calls in the skidders, log loaders and logging trucks when you harvest timber. But many hunting landowners and hunting land leasers share the same concern: Will the equipment, noise, habitat disturbance and human activity of a logging operation have a significant impact on deer activity in the immediate area?

That was a question that Don Draeger, wildlife biologist at the Comanche Ranch in South Texas, wanted to answer through research. In the Brush Country of South Texas, wildlife managers are using mechanical techniques to create more edge habitat. One technique involves “chaining,” in which a heavy-duty chain connected to  large bulldozers is dragged through brush to create openings, then the debris is cleared and stacked. After that, a large dozer pulls a root plow through the openings to eliminate hardpans and aerate soils, encouraging growth of native grasses and forbs. While the long-term effect is very good for the habitat and deer, the mechanical process itself is a significant disturbance. Don wanted to know if whitetails are being pushed into other areas by the habitat work.

Using a 3,547-acre enclosure on the ranch, Don first established patterns of normal habitat use by deer. He did this by carefully monitoring consumption rates of supplemental feed at 20 evenly-spaced feeding stations throughout the 5-square-mile enclosure over a 45-month study period. With baseline data showing areas of the habitat used more often by resident deer, Don continued monitoring the feed stations as the “chaining” and clearing work began, section by section. The results were clear: Deer responded rapidly to the habitat disturbance and moved into adjacent areas away from the work. Feed consumption (and deer density) fell in areas where work was occurring and increased in neighboring areas where deer density had previously been lower. However, once the work ceased, deer quickly returned to the area. Normal habitat use patterns resumed within three to four weeks after the work stopped.

Although Don’s study was conducted inside a high fence, the study area was very large (3,547 acres), and it is likely that free-ranging whitetails would respond to major habitat disturbances in the same way. While deer may leave the area while work is underway, they will likely move back in quickly once the machinery and noise are gone. Matt Ross, a licensed forester, certified wildlife biologist and QDMA’s Certification Programs Manager, told me that he believes the response time would be even shorter in landscapes like those in the eastern U.S. that feature a mixture of forests and agriculture. Other studies have shown that whitetails are extremely loyal to their established home ranges. They are reluctant to leave them even during major disturbances like floods but return quickly after the disruption is over.

Deer acitivity will certainly be affected when loggers begin their work or other Timber Stand Improvement (TSI) activities occur, but the effect will be short-lived. Plus, TSI produces benefits like improved cover and forage that will last a long time!