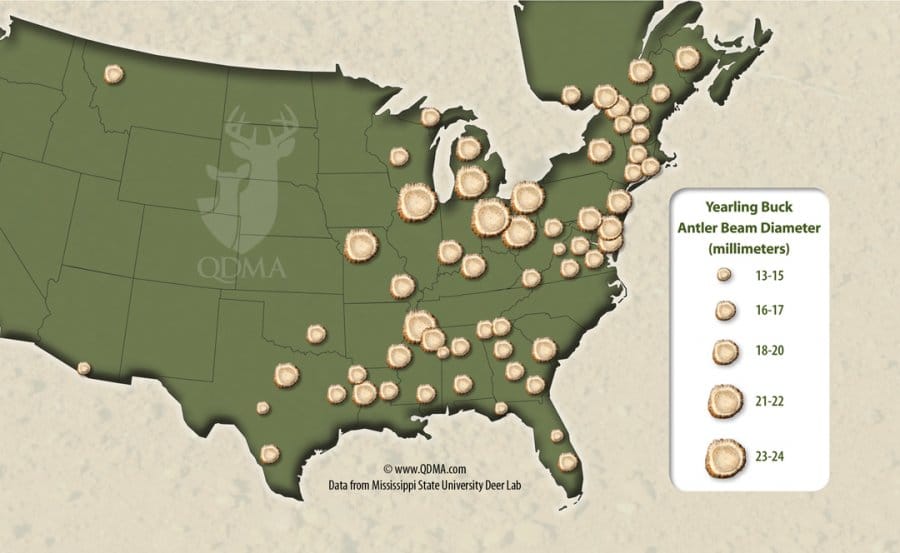 All wildlife biologists learn in their first ecology class about a relationship called Bergmann’s Rule: within a species, or group of similar species, body size increases with latitude from south to north. It’s assumed this adaptation is related to thermoregulation in extremely cold and warm environments. The bigger your body is in a cold environment, the easier it is to conserve body heat (as the body gets larger the relative surface area of the body decreases, so it takes less energy per pound of weight to keep an animal warm). The opposite is true for critters in warmer climates – smaller is better, because it’s easier to keep cool with relatively more surface area exposed for evaporative cooling. When you think of white-tailed deer the theory seems to hold. Deer body size in the North is generally larger than in the South; the extremes are exemplified by Florida Key Deer where a mature buck may weigh 60 pounds and a similar buck in Minnesota may weigh 300 pounds.

But what about antlers? Does the same trend hold?

The Mississippi State University Deer Lab explored this question by requesting antler size data from states and provinces throughout the whitetail’s range. We would have loved to use Boone & Crockett Score, but very few state agencies routinely collect those data due to time constraints. What we chose to use was antler beam diameter for yearling bucks. Beam diameter has long been collected by biologists as a metric of buck quality and is generally correlated with overall antler size. Our request to state agencies resulted in 74 data points that we plotted on a map of North America to examine the relationship between latitude and antler size.

While body size may generally conform to Bergmann’s Rule, the relationship between latitude and antler size is weak. In statistical terms, only 7 percent of the variation in yearling beam diameter was explained by latitude. So, as you can see from the map above, antler size tended to increase with latitude, but there are many more influential factors. Notice that, on average, the largest yearling antlers come from the Midwest where fertile soils, soybeans, and corn are quite common. Contrast the Midwest antlers with those from the Northeast – although deer from this region are further north, the soils and land use practices are not as conducive to quality deer forage production. Finally, examine the data point from southern Texas. Those legendary South Texas bucks aren’t born big; they achieve large antlers through management of age structure and habitat.

Deer from northern latitudes do have the framework to be larger because antler size and body size tend to be related. However, the map clearly shows that deer habitat (in this case soil quality and food) can have a bigger impact.

The take home points are:

1) keep your expectations realistic and in context with the area where you are managing deer, and

2) managing deer density and habitat to produce an abundance of superior foods can yield big results in your Quality Deer Management program.

About the Authors: Dr. Bronson Strickland is an Extension wildlife specialist and researcher, and Dr. Steve Demarais is a wildlife biologist and professor, both at the Deer Ecology and Management Lab at Mississippi State University.