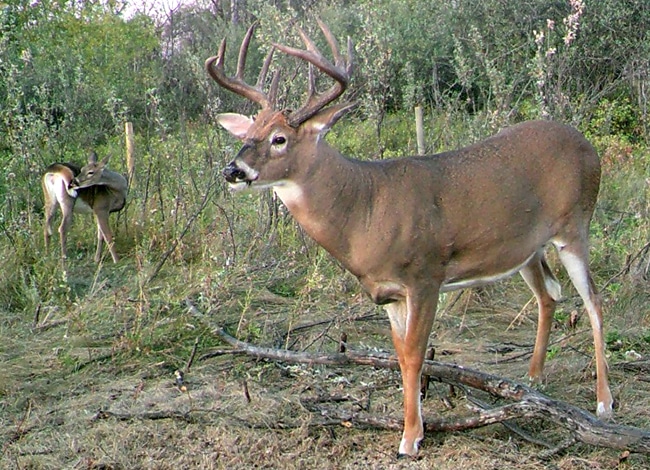 Whitetail antler growth is driven by photoperiod and regulated by hormones. In general, antlers begin growing in spring, grow through late summer, shed velvet around early September, fall off in winter, and start growing again a couple of months later. Most bucks cast their antlers in January to February and start new ones in March to April.

Some bucks drop their antlers early as a result of poor nutrition or an injury, while some carry them longer due to a continued presence of estrus does or frequent fighting that can keep testosterone levels elevated. Good nutrition and mild conditions can also delay antler casting.

This is exactly what happened in many regions during the mild winter of 2016-17. Bucks from several areas carried their antlers into March and April of 2017 as a result of above average temperatures and, in the north, below average snow depths. What happens to the next set of antlers when the prior set was shed much later than normal? There’s very little data on this subject. You’d hope bucks that shed late as a result of good conditions wouldn’t be penalized with less antler growth.

A good friend in Saskatchewan asked me that exact question this summer as he had some interesting trail-camera photos of two bucks he had a history with. Dean Partridge is the owner of Canadian Whitetail TV on the Pursuit Channel and WILD TV. He’s a passionate conservationist and one of the most disciplined hunters I know. He also spends a tremendous amount of time monitoring the deer herd in his area, as he and a coworker, Steve, average reviewing 10,000 trail-camera photos per week from January to June and 30,000 per week from July to December. That equals nearly 1 million trail-camera photos per year! Suffice it to say, Dean has a lot of information and a lot of history with the local deer herd. Here is the story of two mature Saskatchewan bucks Dean named “Flyer” and “FF.”

Dean also shed hunts. A lot. In most years, he and Steve collect about 200 sheds during the winter. Thus, he has a really good feel for when antlers in his area are hitting the ground. He picks the first shed up around Christmas, and the majority drop from late January to mid-February. This past winter was especially mild in central Saskatchewan, and bucks held their antlers much longer than normal. Flyer dropped one on February 20 and the other on March 28. FF was even later as he dropped both antlers between April 10 to 14. By this time other bucks were already growing their next set.

The photos below show Flyer in June and late August 2016, and in June and early September 2017 for comparison. 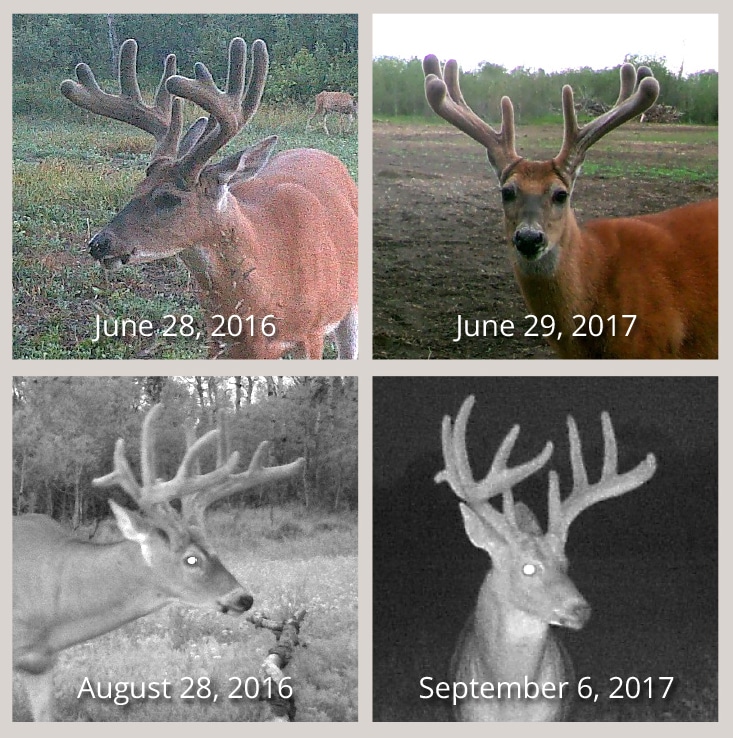 Quite a difference! Interestingly, most bucks in Dean’s area shed their velvet in late August or early September, but Flyer still had his on September 13. 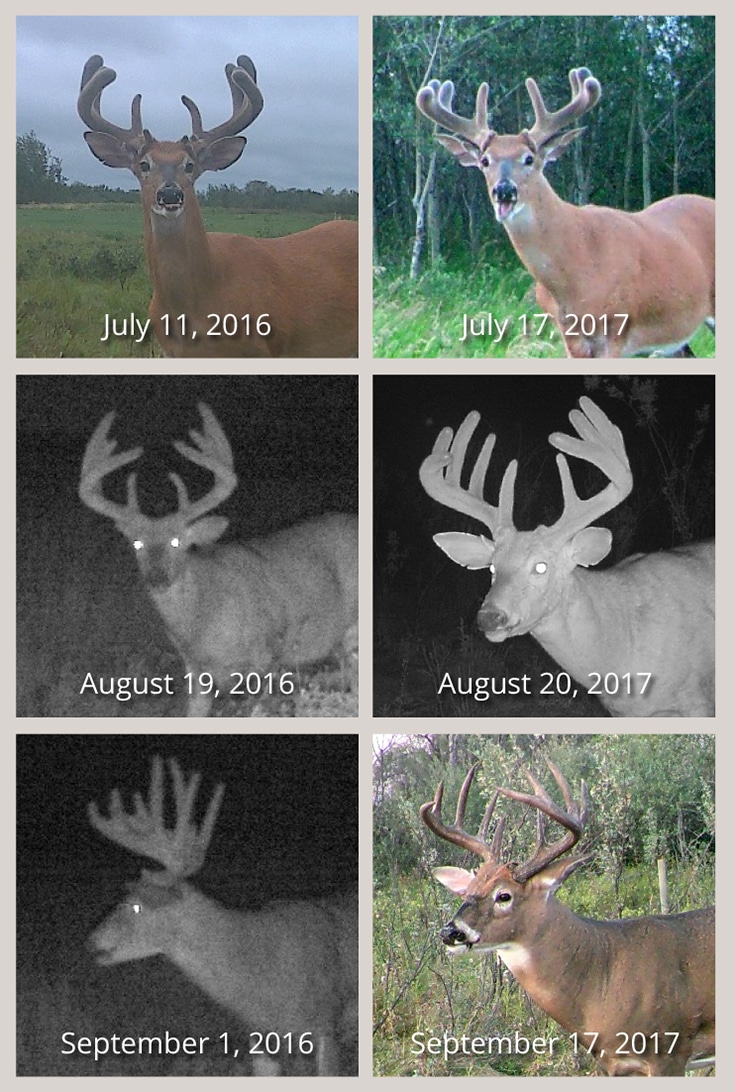 Until bucks are past their prime, another year of age typically adds several inches of antler. Dean estimated Flyer was 5.5 years old and FF was likely 7.5 years old in 2016.  Thus, both bucks could/should have easily grown larger antlers in 2017. In addition, mild winters often allow bucks to put additional nutrition to antler growth the following year and have larger antlers to show for it. Unfortunately for these bucks that was not the case. Flyer lost about 15 inches of antler from 2016, and FF lost 25 to 30 inches!

How did this happen? Was it due strictly to their late antler drop, or something else? I asked numerous professional deer managers and researchers about late antler casting, and none knew what to expect for this year’s antler growth. Dr. Mickey Hellickson from Orion Wildlife Management Services in Texas shared that a friend with captive deer suggested these two bucks’ antlers would continue growing into September after other bucks had hard antlers to make up for their lost growing time. This deer breeder had witnessed this in his pens. This did not happen for the Saskatchewan bucks, as FF shed his velvet on time, and even though Flyer hadn’t shed by September 13, numerous trail-camera photos showed his antlers were done growing at the same as other bucks in the area.

Another possibility is following the easy winter, the area was hit with a drought. Normal summer rainfall in the area averages 12 to 13 inches, but the 2017 summer received less than 2 inches. Following an almost nonexistent snow melt in spring, the drought has left the area extremely dry and has negatively impacted deer forage during the 2017 antler growing period.

The 2017 drought has certainly impacted Flyer and FF, but since most bucks in the area that shed on time last winter have larger antlers this fall, it’s pretty clear their late shedding significantly hurt their current antlers. If these bucks survive this hunting season it will be very interesting to see what happens to their antlers in 2018.

As a final thought, photoperiod-controlled experiments have caused whitetails to grow multiple sets of antlers in a year and also retain their antlers for more than one season. An expansion of such a project would better answer Dean’s question. QDMA has pledged to provide $1 million in research, on-the-ground management, and technical assistance for white-tailed deer over the next five years, so a new research project may be in the works. You can help us do more in this area by supporting QDMA, a 501(c)(3) charity, through membership in our organization or a tax-deductible donation. Thank you!