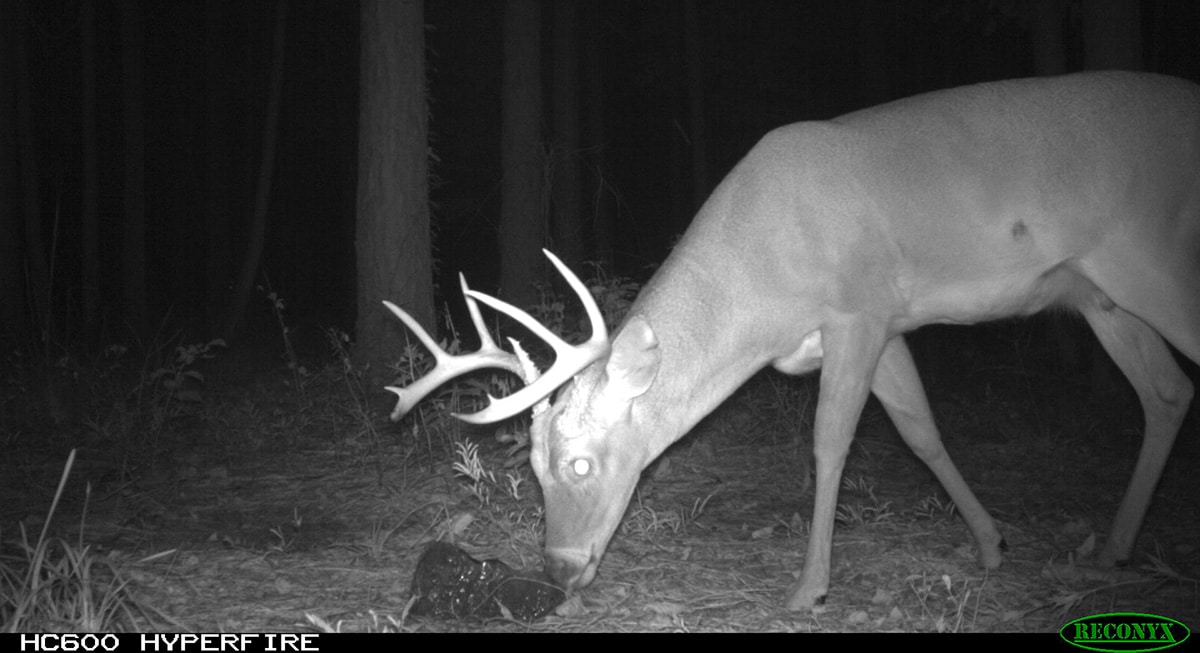 When spring rolls around, hunters everywhere gear up to begin establishing or “recharging” the mineral sites on their hunting properties. They know that deer typically begin using supplemental minerals around spring green-up and continue until early fall. Surely, the knee-deep depressions in the soil caused by repeated years of mineral supplementation are evidence of deer need, correct?  Maybe, or maybe not.

Growing antlers are composed mostly of proteins (80 percent by weight); whereas hardened antlers contain roughly equal amounts of proteins and minerals. Studies have shown that calcium and phosphorus are by far the two most common minerals in deer antlers, comprising 30–35 percent of the mature antler by weight. However, a University of Georgia study detected 11 different minerals in the whitetail’s antlers. In addition to calcium (19 percent) and phosphorus (10 percent), the next most common elements were magnesium (1 percent) and sodium (0.5 percent). Lesser amounts of other minerals were found including potassium, barium, iron, aluminum, zinc, strontium and manganese. Besides calcium and phosphorus, little is known about the role of other minerals in antler growth.

Minerals are also important for does.  During gestation and lactation does have high requirements for calcium and magnesium.

Research on domestic livestock has documented numerous benefits of mineral supplementation including increased forage intake, improved forage digestion, and increased reproductive success. In contrast, most studies on whitetails have focused on the impacts on body weight and antler development. Researchers at Mississippi State University found a strong correlation between soil mineral content (primarily phosphorus) and body size, although no correlation with adult antler size was found. They concluded that soil phosphorus levels were the best indicator of body size, probably because phosphorus deficient soils are common throughout the United States.

A classic study on the mineral needs of deer was conducted at Penn State University in the 1950s. In this study, researchers did detect a difference in yearling buck antler development between supplemented and unsupplemented groups. However, these herds were fed a nutritionally deficient diet below what most whitetails would have access to in the wild. Furthermore, when the same deer were examined the following year as 2.5–year–olds, no differences were detected between the two groups.

In a similar study conducted at Auburn University, researchers tried to detect differences in body and antler size between an unsupplemented and supplemented group. This study differed from the Penn State study in that both herds were fed a nutritionally complete diet. In addition, one group was provided a commercial mineral supplement. Over a four year period the researchers were unable to detect any differences between the two deer herds.

Without question deer need minerals, and they will readily use mineral licks. But why do they use these licks and why is their use restricted primarily to the spring and summer? Many hunters believe that it is simply because bucks need the minerals for antler growth and does for raising fawns during these months. However, several studies have shown that while deer readily use mineral licks high in salt, they rarely, if ever, use pure mineral supplements. If deer were lacking minerals, why wouldn’t they use the pure mineral supplement even if salt wasn’t present? No one can say for sure, but it’s probably because most minerals by themselves are bitter.

Could the use of salt/mineral mixes simply be due to an increased need for salt? According to research, yes. During the spring and summer, deer operate at a sodium deficiency due to the high potassium and water content of the forage. This interferes with efficient sodium conversion in the body and increases the need for sodium. This makes deer actively seek out concentrated sources of sodium such as natural or man–made licks. Research in Tennessee supports this. Type of mineral formulation affected total deer use of baited sites, with a high salt formulation receiving over four times the number of daily visits from deer as other formulations.

Almost all soils more than 25–50 miles from a seacoast are low in sodium. Therefore, in these areas, salt may be just as necessary as calcium and phosphorus to whitetails during the spring and summer.

There are three main types of mineral supplements.

What does all this mean to the average deer hunter and manager? The results of these studies suggest that mineral supplementation – especially calcium, phosphorus, and sodium – may provide some benefit, especially in situations where deer are nutritionally deprived or areas with minerally deficient soils. However, age and nutrition are the two most important ingredients for producing large antlered bucks. Regardless of the intensity of mineral supplementation, a yearling buck will still be a yearling buck. Bucks must live long enough to reach physical maturity while having access to high quality nutrition to achieve maximum antler growth. Creating a lick is certainly fun, inexpensive, and watching deer respond to these licks is satisfying. Mineral licks also provide a great place to survey deer with game cameras.

So, if you have already addressed the larger concerns of habitat and herd management, mineral supplements can be another part of your overall management plan. The key is to have realistic expectations. Don’t expect to see trophy bucks walking around this fall just because you gave them a mineral boost this spring. While the advantages of mineral supplementation have not been clearly documented, neither have any disadvantages.