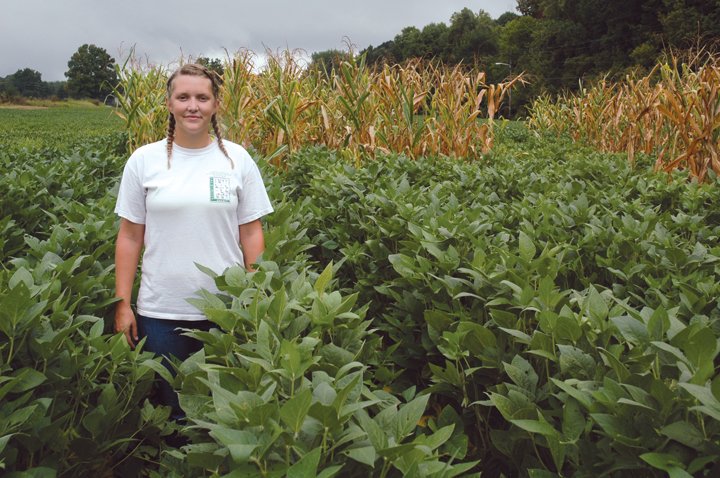 The species and rates of plants included in a seed blend is an important consideration when planting food plots. Certainly, you want to include species that are compatible with each other in terms of growth structure, soils, and timing of production. Ideally, species are used that enable you to control weeds with some herbicide management strategy and, of course, all species used should be palatable and provide adequate nutrition for deer.

Corn and soybeans represent the backbone of many food plot programs for white-tailed deer across the country. Over the past few years, planting Roundup-Ready® corn and “beans” together in a mixture has become a popular practice. Normally, about 40 pounds of soybeans are planted with about 10 pounds of corn per acre. This equates to an average seed count of 130,000 soybean seeds and 15,000 corn seeds per acre. This planting rate has led to many successful food plots and has fed countless deer and other wildlife. However, is this the best rate and/or strategy? For example, does 2 acres of a corn/bean mixture produce as much forage and/or grain as 1 acre of corn and 1 acre of beans planted separately?

According to plant population, competition for sunlight and nutrients could limit forage/grain production, especially considering how corn and soybeans have considerably different nutrient requirements and how corn grows so much taller than soybeans. Everyone who has ever planted a corn/bean mixture has certainly noticed “weak” beans where the corn is robust and relatively dense. And where the corn is relatively sparse (with less yield), the beans are taller and more robust.

We amended all sites with the appropriate amount of lime and fertilizers according to a soil test in the weeks preceding planting. Corn plots were side-dressed with 60 pounds of nitrogen (N) when the corn reached the five-leaf collar stage (With side-dressing the fertilizer is spread immediately along each row. Space between rows is not fertilized). We planted Terral REV 28HR29 corn and Allen (RR) soybeans. Pure corn plots were planted at 18 lbs./acre (29,000 seeds per acre) and pure soybean plots were planted at 58 lbs./acre (185,000 seeds per acre) with a John Deere MAXEmerge Plot Cone Planter. Mixed plots were planted with 13 pounds of corn (20,000 seeds) and 38 pounds of soybeans (122,000) per acre. Plots were sprayed with Roundup® WeatherMax after weeds emerged (two to three weeks after planting).

We harvested the soybean foliage and small stems (representing the most palatable and digestible portion of the plant that deer commonly eat) by hand using gas-powered forage clippers. Soybean seed was harvested with an ALMACO SPC 40 plot combine. Corn grain was harvested by hand and then run through the ALMACO plot combine to obtain grain weight and moisture. Soybean forage was dried in a forced-air dryer. Soybean seed yields were adjusted to 13 percent moisture and corn grain yield was adjusted to 15.5 percent moisture. The results reported here represent the mean yield across all three sites.

Corn grain yield tended to be greater in the pure plots than in mixed plots, but there was considerable variation in grain yield among plots, which we attributed to extreme dry conditions early in the growing season.

Certainly, seeding rate affects yield. Although our seeding rate of soybeans in the mixed plots was approximately 65 percent of that in the single-species plots, it was clear that competition with corn was negatively affecting soybean yield. Soybean plants in the mixed plots were shaded and obviously weaker than those in single-species plots. While increased sunlight would be available for the beans if we decreased the corn plant population below 20,000 seeds per acre (which is what we used in the mixed plots), we don’t believe that is a valid option because it would further decrease corn grain yield to the point that it would no longer be worth planting the corn. However, though the bean plants were relatively weak, it is possible that an increased soybean plant population could increase soybean yield in mixed plots.

Some hunters argue they like having soybeans in the cover of corn. Others say they like having strips of corn and beans growing side by side, making deer more visible when they walk into the bean strips to feed. We won’t get in the middle of that argument, but we will continue to try to identify the best strategy related to production.

About the Authors: Dr. Craig Harper is a professor of wildlife management and the Extension Wildlife Specialist at the University of Tennessee. Craig conducts research and extension programming on several issues related to Quality Deer Management.

Jessie Birckhead is a graduate research assistant in the Department of Forestry, Wildlife, and Fisheries. Her primary research focus is the effect of grazing on wildlife habitat in native grass pastures, however, working in the habitat lab at UT, she is also driven to work on food plots for whitetails!

Dr. Fred Allen is a professor of plant sciences at the University of Tennessee. Fred coordinates the agronomic crop-variety testing statewide and conducts agronomic research on corn, soybeans, wheat, and switchgrass.