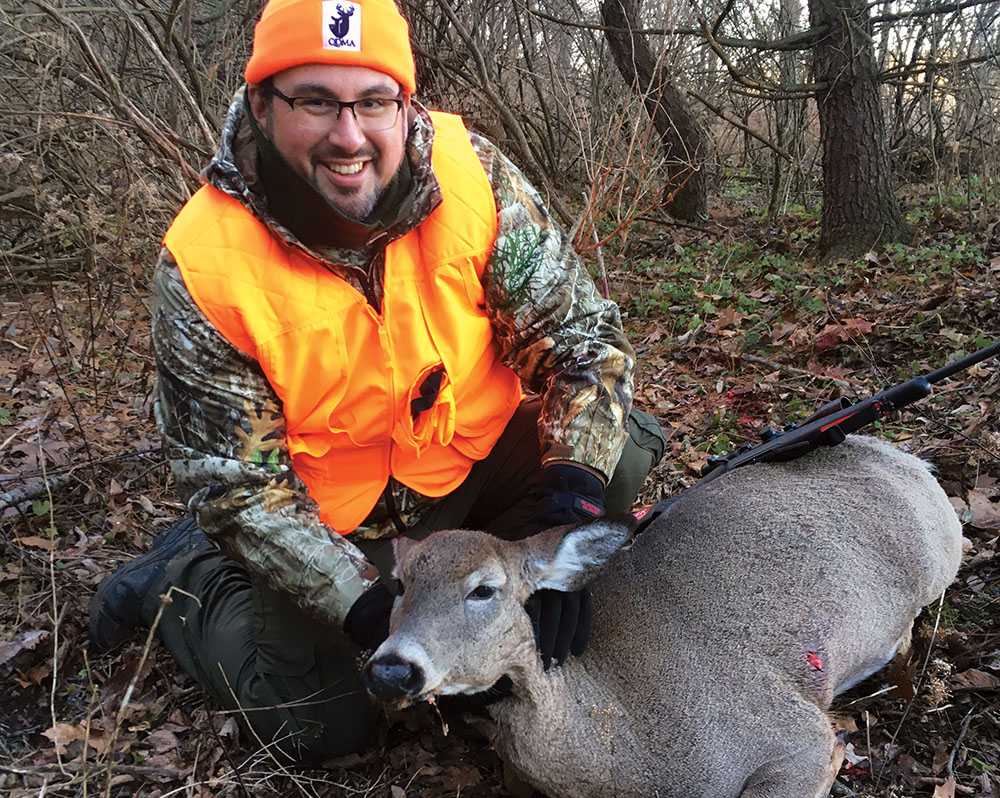 They found me at the farmer’s market in Saratoga Springs, New York. Matt Ross, the smiling QDMA ambassador, asked if I’d like to try some venison. The samples stuck with toothpicks looked delicious, and having just recently decided this was the year that I was going to finally learn to hunt deer to get back to nature and harvest my own meat from the wild, it was a fortunate question to be asked. I accepted, expecting a gamey, mutton-like flavor, but was surprised by its subtle difference from beef. It was a lean cut, flavored like a steak, and grilled to medium- rare perfection. I shared a bite with my son, who, all of 6 years old, enjoyed it with a smile.

Matt and I talked, and I told him I was interested in hunting. As he explained the QDMA Field to Fork class available that autumn, I foresaw my success in the field, and the culinary potential on my table. I daydreamed of success in the field of finding out what I was made of in a rudimentary sense of man-in-the-wild. After spending decades as a simple consumer of foods, how do I insert myself back into the ecosystem as a participant in nature, where my species has affixed itself as apex predator?

The classes were excellent, interactive, educational and comprehensive to the skills I’d need to hunt my first deer. I found a band of like-minded, would-be hunters all eager to get back to participating in the acquisition of their food, of being true conservators of nature, of honoring the earth with their mindful presence and attendance to the wild.

My hunting day had finally arrived. It was a wonderfully cold morning in November. My mentor, Dave Collins of QDMA’s Upper Hudson River Valley Branch, greeted me at 5:30 a.m. at his home, and he drove us to a farmer’s soybean field where a hay bale blind waited to conceal us. A sliver of sun broke the dawn, the smallest wedge of orange against an indigo canvas.

As we walked to the blind, the crunch of frozen grass beneath our feet echoed around me and I worried we’d scare off any deer. But I remembered my training, certain that the deer were just now waking up and assessing their next moves before they started off in search of food at first light. They were sure to approach this soybean field, which held a good crop and a solitary apple tree in the center. This was going to be a good morning, and I had visualized myself shooting a deer so many times that it seemed that reality only had to catch up to my dreams.

Dave and I situated in the blind. He arranged himself as my scout, his binoculars searching for movement in the soybeans. I sat next to him, realizing that my own binoculars were not rated for cold autumn mornings. They fogged immediately and became useless, and I noted to myself that I’d have to make sure my gear was always as ready as I was. I sat patiently, my Ruger American .308 loaded, safety on.

To the right I noticed some movement, some kind of prowling predator.

“We got a bobcat or something out there,” I whispered to Dave.

It hadn’t occurred to me to do that, that hadn’t been our mission. I understood the varmint control aspect of it, and I became excited at the idea of bagging two animals this morning, because after all, to my mind a deer was guaranteed. But I hesitated, as I didn’t want to lose focus from the task at hand. Before I could decline, the coyote ran away, chasing whatever mouse had caught his attention.

“I see a deer out there, back corner,” I whispered. We watched what seemed to be a doe, far across the field. It was browsing, chewing on some soybeans. It seemed far away, and even though I had practiced weekly zeroing in my Ruger, I had not yet attempted a 200-yard shot, but I knew I was deadly at 100 yards and that my rifle and scope were ready. It was five minutes before shooting light, and there was plenty of time to let her come in closer to a more comfortable range for me, for her sake.

“Let’s watch her and see what happens,” Dave said.

We waited a bit, and as legal shooting light came upon us, we heard one or two pops echoing through the countryside. It was the sound of success, I thought; other hunters on other lands having a good morning. That’s when Dave whispered, “There’s another doe right here.”

I looked out his window and saw a cautious doe approaching the field from behind us, its gait unwavering as it walked with confidence through the soybean field. It disappeared over a slight bend in the field. Dave encouraged me to get ready. We’d wait to see where she walked out, as there were two possibilities after the gully she went through.

“She’ll either head to the swamp or come up right by us,” he said.

And, just as he explained, she very lightly walked across the field, about 100 yards away, hungry for what that apple tree had to offer.

I pointed my rifle out the window, mistakenly resting the barrel on the flap of the blind to steady my aim.

Embarrassed, I corrected and found the doe in my scope. I had read and seen videos on gun support placement, learned how pressure on the barrel can render the scope useless for the shot, but in my excitement simply forgot.

I found a band of like-minded, would-be hunters all eager to get back to participating in the acquisition of their food, of being true conservators of nature, of honoring the earth with their mindful presence and attendance to the wild.

I switched off the safety, and my breath became labored.

It sounds dramatic, but my life changed that day. Prior to this morning I was a hunter in training, taking classes, getting licensed, and learning with other novices from mentors dedicated to passing on the tradition and skills. I had bought my first firearm and joined a gun club to zero it in at the range. In that meticulous practice, I had only ever used paper targets, sometimes with a deer drawn on them. That experience is not a substantial replication of seeing a live target in my scope. The facsimile of a deer at 100 yards on a man-made gun range is nothing close to the sight of a wild doe, foraging on apples and walking to and fro.

Knowing that her sacrifice was imminent engendered a feeling in me I never had before. It was a sincere understanding of the gravity of my relationship to her. This was the moment of harvest, and the excitement, gratitude, and awe of the moment filled my heart.

I hadn’t expected to have a visceral, physical reaction to this moment, but my breathing was still heavy. So much so Dave told me to breathe easy. I took a moment, concentrated on finding the kill zone, allowed myself to be amazed at the living creature in my sights, and quietly took note of the raw power I suddenly felt to take a life to feed myself and my family.

I’ll never forget it. I was suddenly imbued with the responsibility, the honor, and the duty of harvesting this doe, and instinct took over.

The shot was sudden. I squeezed the trigger the moment I knew my aim was true, and I surprised myself with the automation with which it happened. The deer reared up and darted directly away from us, across the field and into the woods.

Of course I did, I thought to myself, how could I not? I’ve waited 30 years for this. I’ve studied and trained and practiced and educated myself, and it’s all led to this moment of harvest. Destiny at hand in a soybean field.

“It’s not always that easy,” Dave said, smiling. It was seven minutes since the arrival of legal shooting light.

We waited a respectable half hour before heading out to track her, and as we walked the perimeter of the field, I breathed in the cold autumn air. The crunching ice beneath our boots was now a welcome chorus of success. Our next step was to find the blood trail, which was a pronounced and frothy crimson. This was a good sign.

The trail splashed across a fence and into the woods. We safely crossed according to our training, and within a few steps we saw her. She had traveled maybe 60 yards after she was hit. She was dead in seconds. The placement of the entry wound and the bubbling blood foretold what the field dressing would soon reveal. Dave would say later, “You double-lunged her.” I knelt next to her, stroked her coat and muzzle and could only think to tell her, “Thank you, thank you.”

I’m grateful for that quick kill, and I’m glad to know I had fulfilled my position in the ecosystem as apex predator. Or, to put it more accurately, earn my position as the apex predator. For so many years I had just felt so disconnected from my food. The years I spent living in urban areas have made me feel worlds away from the wild. Before this, my feeling was that of simply a human being, on the earth, eating what was offered. But now I was a human being, a hunter now of the earth, eating what I harvested.

We let the dressed deer age in the barn, but that night at home I prepared the heart and part of the liver for dinner. I shared it all with my wife and kids, and told the story of the hunt, reliving every detail. They enjoyed the meal, and now we look forward to the next deer season together, knowing that hunting is now a part of our way of life. My sons talk about hunting deer themselves, and I look forward to that experience years from now. When they are ready to learn, I know that I’ll send them to a QDMA class to learn as I did, and continue the tradition together.