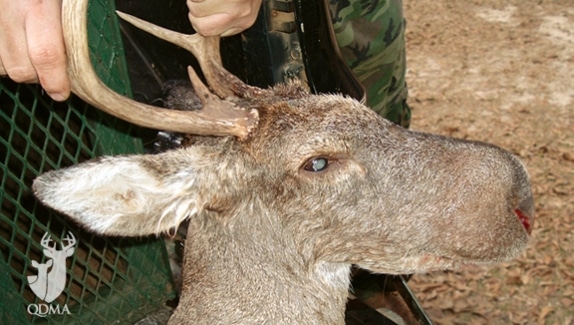 Whitetails are hardened survivors. They thrive despite predators, highways, heat waves, blizzards, floods, drought and poachers with spotlights. They get hung in fences, fall down old wells, and crash through plate-glass windows. They snag their antlers on our garbage, including buckets, basketballs and barbed wire. They collect tumors, warts, brain infections and blood-sucking parasites. But one of the weirdest afflictions of whitetails you are unlikely to encounter is so new it doesn’t even have a scientific-sounding name yet. The unfortunate victims are called “Bullwinkle” deer because their snouts balloon to moose-like proportions (pause for Millennials to find “The Rocky and Bullwinkle Show” on YouTube and make the cultural connection).

QDMA has been aware of Bullwinkle deer since the mid-2000s when we started receiving occasional photos taken by hunters, and we contacted the whitetail disease authorities at the Southeastern Cooperative Wildlife Disease Study unit (SCWDS). They were already on the case, but after a decade of investigations the disease is still mysterious. In their most recent quarterly newsletter, wildlife disease expert Dr. Kevin Keel shared what little is known. Here are some highlights from that report. 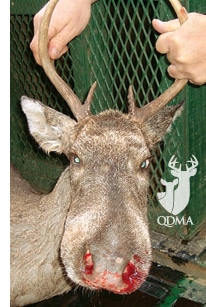 • Since 2005, SCWDS has received 10 samples of Bullwinkle deer from all over the whitetail’s range, with a far northern case in Michigan and the southernmost case in Alabama. The cases are widely scattered with no geographic patterns or concentrations, so it appears the problem is not easily spread from deer to deer, if at all. The photos above and on the right are of a deer killed by Gordon Murph in Alabama in 2008, showing the typical symptoms.

• The swollen snouts of afflicted deer result from chronic (long-term) inflammation of the tissues of the nose, mouth and upper lip. All of the cases involved similar colonies of bacteria in the inflamed tissues, but isolating the guilty bacteria has been difficult due to poor sample condition and contamination from many other non-guilty bacteria. How and where deer acquire the Bullwinkle bacteria is still unknown.

• All of the cases of Bullwinkle deer submitted by state wildlife agencies have been since 2005. No cases appear in 50 years of SCWDS files prior to that year. Is this because the disease itself is new, or because hunters can instantaneously share photos through the Internet now and our awareness of the rare disease is enhanced?

• While the Bullwinkle infection is no doubt uncomfortable for the victim, it doesn’t appear to be lethal. All of the samples have been submitted from deer killed by hunters. QDMA has also received trail-camera photos of Bullwinkle deer that appeared otherwise healthy and that were photographed on multiple occasions over time. SCWDS said one person saw the same Bullwinkle deer several times over a period of two years. The photos below were sent to QDMA by Kevin Payne and were taken in South Carolina in 2011. 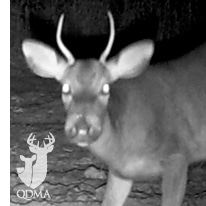 • Should you eat a Bullwinkle deer if you kill one? We don’t recommend it. The long-term nature of the infection could mean that bacteria are present in the blood and muscle, or a secondary infection could also have developed. Better to be safe than sorry.

QDMA will continue to keep you informed as new information is available about this rare, weird condition.