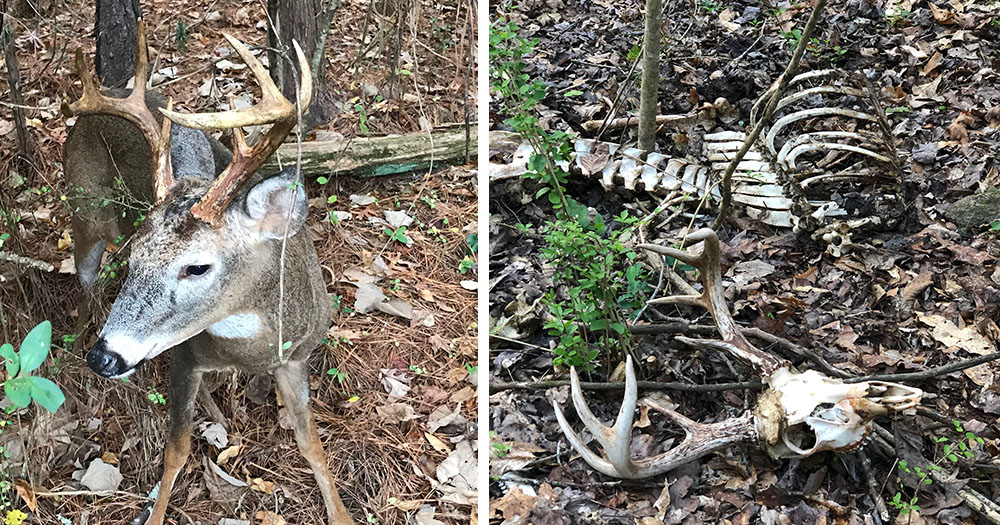 Last October a family friend encountered a buck on his property that had gotten tangled in a woven-wire fence. After being carefully freed from the fence, the deer stood around seemingly dazed and confused. At one point the buck even approached our friend, Neal, before dashing off into a nearby thicket (see the video below). Neal continued to watch the buck as it slowly made its way to a nearby pond, where it proceeded to walk into the water and stand for a minute. It then exited the pond, walked a short way and got right back in before eventually wandering off into the adjacent woods.

Knowing I was an avid deer hunter and NDA employee, Neal shared with me a photo and a short video clip he had shot of the incident. Due to the buck’s strange behavior and the fact it had gotten in the pond, I assumed it was probably suffering from Epizootic Hemorrhagic Disease (EHD). EHD is not uncommon in Georgia, and in my former role with the Georgia DNR, I would typically deal with a local case or two annually.

That one run-in was the last Neal saw of the buck, and since the buck was long gone by the time I heard the story, I didn’t give it much further thought. That is, until I recently spent a morning roaming Neal’s property in the hopes of filling a turkey tag. While easing along a creek that morning, I came across the full skeletal remains of a nice buck. And since the jawbone was still intact, I was able to age the buck at 3 1/2 years old. I immediately remembered Neal’s October encounter and looked back at the video he had sent to compare the two. Sure enough, it was the same buck.

Finding the buck’s remains next to a creek just reassured me of my earlier assessment – EHD was the culprit. But as I was admiring the heavy antler bases of the buck, I noticed something that would change my diagnosis: there was an obvious crack in the skull that completely circumvented the left antler pedicle. What first appeared to be a simple case of EHD now seemed more likely to be the result of a brain abscess. That would explain the dazed and confused condition of the buck back in October and certainly the crack around the antler pedicle.

For those unfamiliar with brain abscesses in deer, it is a condition that often starts with a buck getting a cut on its head through rubbing or sparring with another buck. Naturally occurring bacteria on the buck’s head then gets into the cut and starts an infection. In some cases, the infection runs its course and the buck fully recovers. Other times, however, the infection begins eroding bone and causing pitting in the skull, eventually making its way to the brain. At that point, death is imminent.

A closer examination of the photo Neal had sent me back in October revealed what appears to be discharge from the infection on the buck’s forehead. The mystery of the tangled-up 8-pointer appears to be solved.

While you’re out this spring and summer, scouting or looking for sheds or turkeys, be sure to keep an eye out for deer carcasses. Each one tells a story. You can use these methods to try and decipher what happened to the deer. Be sure to pay particular attention to the skull of the animal, particularly on adult bucks. If you see cracks or pitting, you are likely looking at the results of a brain abscess.