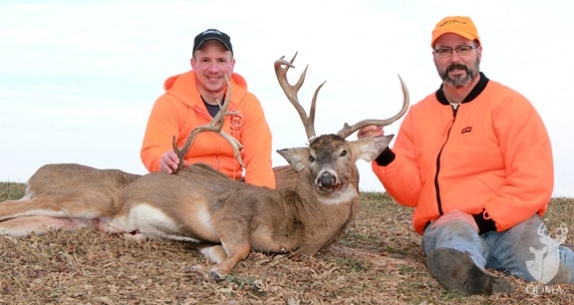 An interesting mystery has been solved, but the end of the story of an incredible Wisconsin buck is not entirely a happy one.

The mysterious buck first appeared in QDMA member Todd Reabe’s trail-camera in November 2012. It appeared healthy except for one obvious problem: Its right hind leg had been crippled in some mishap and was sticking almost straight out behind the deer, useless, stiff and withered by muscle atrophy. In a classic example of the neurological connection between antler growth and skeletal structure, the buck’s left antler – on the opposite side of its body – was deformed. This sympathetic link between leg injuries and antler deformity has been documented many times. We published an article about this connection using Todd’s photographs as a case study. Todd theorized the injury resulted from a car collision.

In November 2013, Todd e-mailed us again – the injured buck reappeared on schedule that month. He still appeared to be healthy and, like in 2012, was photographed working scrapes and chasing does on his three good legs.

Todd’s neighbor and fellow QDM Cooperative member Kevin Soda found the buck’s shed from the 2012 season on his hunting land. Then in December 2013, Kevin got what he and Todd had both been hoping for – a shot at the buck (That’s Kevin on the right in the photo above, and Todd is holding the 2012 shed). Todd was ecstatic for Kevin. Anxious to study the buck’s leg, Todd didn’t care which of them killed the buck as long as he got his hands on the deer. 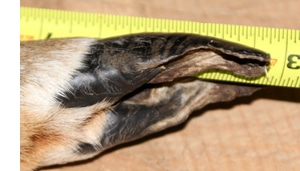 “From the outside, the buck appeared to be healthy,” Todd said. “Physical injuries indicated that he had been actively fighting. He had a fresh tine wound on his right rear leg. He also had multiple chipped/broken tines. He weighed 138 pounds field-dressed. There was some atrophy of the muscles in the right rear hindquarter. Another very visible difference was the hooves on the right leg were substantially longer than the left. This was clearly a result of the right foot not touching the ground, which prevented the normal wear that would have kept the hoof growth in check.” (On the right is a photo Todd took of the right hoof)

As you can see, Todd “CSI” Reabe was serious about this investigation. He sent us dozens of photos of his painstaking deconstruction of the buck’s leg.

Todd discovered the primary injury to be centered on the buck’s stifle joint, a quadruped’s equivalent of the human “knee,” where the tibia and femur meet. There was a large amount of scar tissue and a number of bone fragments in the joint. Todd boned out the entire leg and separated it into sections at the joints, being careful to study and photograph what he found. He saved all of the bone fragments he found as he cut through the stifle joint. Then he put all the meat-covered bones and bone fragments into a wire-mesh basket and boiled them to remove the remaining muscle and connective tissue.

Later, he sorted and studied the cleaned bones. The damage to the right stifle joint was obvious, but he found no clues as to the cause. The photo below shows the normal left leg and stifle joint (along with the patella, or “knee cap”) and the damaged right leg. All of the bone fragments seen in the photo were packed in the damaged joint. 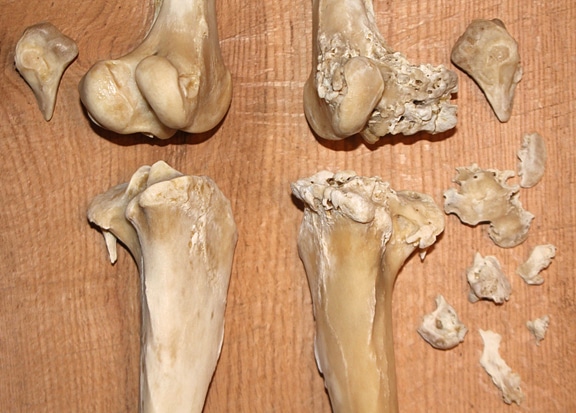 Todd had also boiled the buck’s lower jaw in the same pot, and when he looked at it he saw that the incisors had fallen out during the boiling process and passed through the wire mesh. Determined to save them too, he drained the pot and went groping through the stew that remained.

“As I was locating the incisors, a small shiny object caught my eye,” Todd said. “It initially appeared to be a small piece of a DVD.”

Holding it up for a better view, Todd suddenly realized what it was: a fragment of a broadhead blade.

The cause is now clear, though parts of the story remain a mystery, such as exactly when the buck was hit by the arrow, and also the identity of the bowhunter. Neither Todd nor Kevin have any idea who wounded the buck. Perhaps that’s for the best. 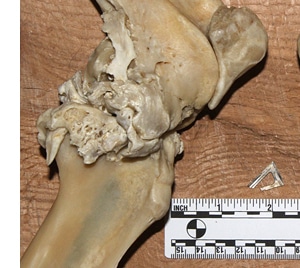 For me, it’s a bit of a punch in the gut to learn that someone was that far off their target when flinging an arrow at a deer. But I cannot judge. I was not there. Maybe this hunter was totally prepared and proficient with a bow, but the deer spun or lurched just as the hunter released the arrow. Maybe the arrow glanced a limb in flight. I’ve heard of even stranger things happening when bows are drawn in treestands in those tense moments when predator and prey are so close. The vast majority of deer shot with arrows die quickly and are recovered, but it’s not 100 percent, and it never will be. As hunters, all we can do with a story like this is recommit ourselves to practice, practice and then some more practice, followed by renewing vows to choose only the lowest-risk shots, at the right angle, within our personal range of proficiency. When we take others with us to the woods, whether family or just friends, we should set the expectation that a hunter is proficient and practiced with their gun or bow — or they do not go hunting. 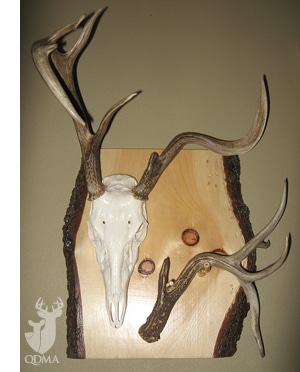 In the end, this story reminds us just how tough and resilient whitetails can be. Kip Adams looked at the photos of the buck’s lower jawbone and estimated his age to be 5½ to 6½ years. Considering the buck’s leg was already healed when he first appeared in front of Todd’s cameras in November 2012, the buck must have survived with three legs for at least two years, possibly longer, before being killed by Kevin. The unique buck is now memorialized in a European mount on Kevin’s wall, with the 2012 shed included.

“All in all, this buck was unique in many ways,” Todd wrote. “He certainly was unique physically, but he was an absolute freak of nature when it came to survival. First of all, he survived a significant injury from an unknown bowhunter. He then survived a rather harsh winter in 2012-2013. This fact is even more amazing when one considers the predator density in the area. Wolves and bears occasionally appear on camera, and bobcats have become fairly common. Coyotes appear to be present at an extremely high density.”

The buck survived with the injury long enough for it to heal and then went on about his business, working scrapes, fighting other bucks, gimping along in pursuit of does.

My money says he even caught up to them.