When QDMA gives you advice on whitetail biology, deer behavior, or habitat management, it’s not an opinion. It’s not a guess. It’s not a rehash of old, accepted wisdom. It’s not even a strong suspicion based on experience. No, it comes from science. Among the ways we stay current with deer science is by attending several annual gatherings of deer researchers to hear what they’re learning, and the biggest of these is the Southeast Deer Study Group meeting. I’m back from the 2017 meeting in Missouri with a fresh batch of science. Many of these new studies will be explored in greater detail in coming issues of Quality Whitetails, so make sure your QDMA membership is current, which also supports our non-profit effort to keep deer hunters armed with science-based knowledge. In the meantime, here are a few statistics and interesting insights I gathered.

Number of trail-camera images containing fawns that Kristin Engebretsen studied carefully so that she could sift out the individual fawns by their unique spot patterns. She identified 28 unique fawns and, by modeling detections, was able to predict total fawn recruitment and estimate fawn survival across her entire study area. Her University of Georgia study suggests this approach to studying fawn survival and recruitment could be used as a cost-efficient alternative to capturing fawns and fitting them with tracking collars.

Number of estrus does that chose to hang out with a larger-antlered buck when given a choice. Mississippi State University’s Daniel Morina mechanically attached antlers of varying sizes to captive research bucks of the same age and weight. He then introduced estrus does into a pen located between the pens of her two options. It seems that when age and body size are equal, and when attitude is removed from the equation (the two bucks in the trials could not physically compete with each other), antler size is a significant factor in doe mating choice. And bigger is better.

Percentages of unique bucks photographed in three separate, pre-season, baited trail-camera surveys that did not continue to appear in non-baited trail-camera monitoring during hunting season on those three study sites. Additionally, James Johnson of the University of Georgia reported significant numbers of unique bucks detected during hunting season that never appeared in the pre-season surveys. Pre-season, baited trail-camera surveys are valuable for a number of reasons, but they are not necessarily good at forecasting every individual buck that may be encountered during the rut.

The year the first expandable deer collar became available to researchers, allowing them to more easily collar and track bucks in spite of their annually expanding and shrinking neck sizes. After 55 years, the collars still aren’t perfect. Jacob Haus of the University of Delaware reported that  12 of 28 GPS tracking collars deployed on adult bucks in his study (43 percent) fell off before their mission was complete.

Estimated number of endangered Key deer killed in the 2016 outbreak of screwworm parasites in south Florida – approximately 24 percent of the entire population. For comparison, a hit of that magnitude to the U.S. whitetail population would mean a loss of approximately 8 million deer, more than what hunters harvest annually. Becky Shuman of the Florida Fish & Wildlife Commission reports that 90 percent of Key deer killed were bucks, because the screwworm fly lays its eggs in small wounds, and bucks often get scraped while fighting during the rut. The parasite is now under control, and the outlook for Key deer recovery looks good, especially since relatively few does were killed.

The number of local deer populations out of 34 sampled across Louisiana (9), Mississippi (21) and Alabama (4) showing a genetic relationship with northern herds used as stock sources during the mid 1900s. Jordan Youngmann of Mississippi State University said that no evidence of northern genetics was found at any other sampled location that had received northern deer during the restoration era. The one location where a potential genetic match still remains is Black Warrior WMA in northwest Alabama, which received 105 deer from Iron Mountain, Michigan, in 1926. Jordan plans to sample more sites across all three states this year.

Peak activity time for does with fawns in the Roan Highlands region of North Carolina – interesting for the fact that it was the complete reverse of coyote activity, which peaked at dawn and dusk (see the chart below). Summer Higdon of the University of Missouri ran trail-cameras at 40 sites throughout summer 2015. She found does without fawns moved most at dawn and dusk along with peak coyote activity. Only the does with fawns appeared to time their movements when encounters with coyotes were least likely.

Rate at which a deer aging lab pointed to the same age when it was unknowingly analyzing the cementum annuli rings of two incisor teeth from the same buck. Abe Woodard, managing wildlife biologist at a large Florida property, sent 99 pairs of incisors separately to the same lab. Results: 15 pairs received the same age estimate, 50 pairs were aged differently but within one year apart, and 34 varied by more than one year. Abe pointed out that Florida does not experience extreme cold in winter. The dark cementum rings in deer incisor teeth are deposited during winter stress periods, making this aging method less reliable where winters are mild.

Number of deer observations from trail-cameras analyzed by Michael Biggerstaff of the University of Georgia to look for patterns based on peak breeding dates. He found one: Appearances by yearling bucks and adult does did not vary across the phases of the rut, but counts of adult bucks (2½-plus) peaked at the same time as the local peak for fawn conceptions (charts of this activity are seen in the photo below). His findings indicate that the daily or weekly count of adult bucks in passive (non-baited) trail-camera monitoring can be used to track the peak of local deer breeding. 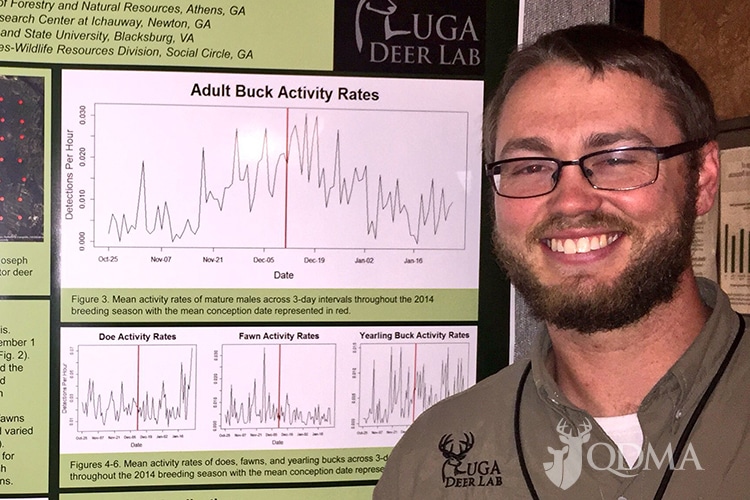 Quote of the Meeting:

“We attacked CWD like a sprint. But it is not. It quickly becomes a marathon.”
–Jason Sumners, Chief of the Wildlife Division of Missouri Department of Conservation. CWD was first found in Missouri at a captive deer farm in 2010. It has since been found in captive and wild deer in five counties, and the CWD Management Zone includes 29 counties.

The importance of drought as a predictor of hemorrhagic disease outbreaks (EHD and bluetongue viruses) is greatest in northern states and declines as you move south.
–Dr. Dave Stallknecht, Southeastern Cooperative Wildlife Disease Study

An in-depth study of the whitetail’s eye indicates they process visual images at a more rapid rate than humans. Therefore, a whitetail’s eyes are far better than human eyes at detecting motion in low-light conditions, like at dawn and dusk when deer move most.
–Eryn Watson, University of Georgia

Serotype 6 of the EHD virus was first detected in the U.S. in 2006 as an “exotic” variety of the disease. It has now joined EHDV-1 and EHDV-2 as “established” in the U.S.
–Mark Ruder, Southeastern Cooperative Wildlife Disease Study

U.S. deer hunters killed about as many bucks in 2015 as they did in 2010, but they did so despite lower buck bag limits in many states (the U.S. average buck bag limit declined from three to two per hunter in that period, as seen in the chart below). Also, the average buck taken by a hunter in 2015 was older than in 2010. Overall, U.S. hunters are enjoying increased success at harvesting mature bucks.
–QDMA’s own Kip Adams, who presented an overview of QDMA’s 2017 Whitetail Report at the meeting. 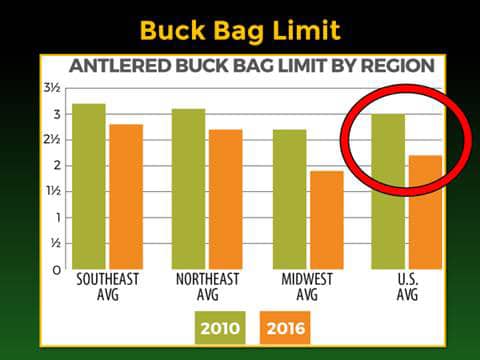 Acorn mast is important to deer health, but its importance is dependent on local habitat diversity. The more “young forest,” open areas, and early successional cover available to deer, the more deer are buffered from the detrimental effects of a mast crop failure.
–Andrew Kniowski, Virginia Tech