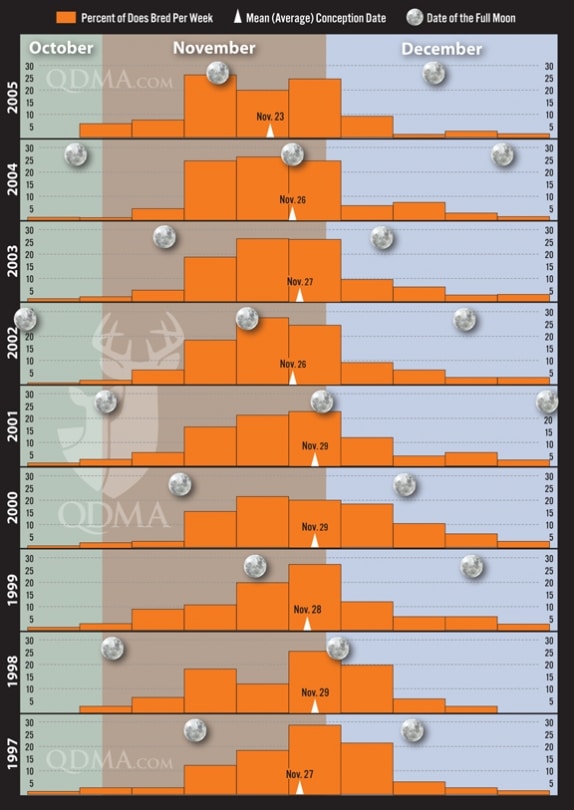 This graphic, produced by QDMA for an article in Quality Whitetails magazine, illustrates a fact that has stood up to repeated scientific testing over the years: The moon does not have a detectable influence on the timing of whitetail breeding.

Scientists have known for decades that the length of daylight each day, which fluctuates throughout the seasons, serves as the trigger for hormone changes in deer that bring on breeding and the rut – though the timing of the trigger varies widely in different regions and deer populations for several other reasons. But stories persist among hunters that the moon plays a role. In 2007, wildlife biologist Rod Cumberland was the deer management biologist for the small Canadian province of New Brunswick, which borders the state of Maine, and Rod wanted to study the moon’s effect on deer breeding dates. He already had a great data set at his disposal.

From 1997 to 2005, biologists with New Brunswick DNR visited the sites of reported deer road-kills to collect biological data, including fetal measurements from pregnant does. The measurements, taken with a fetal scale invented by QDMA founder Joe Hamilton, allowed biologists to age each fetus to determine the precise conception date. With more than 1,600 does providing fetal data across nine years, the enormous sample size was more than adequate for Rod to draw sound conclusions.

The chart above depicts that data. The bars represent the percentage of each year’s sample of does bred per week from late October through the end of December. The moon images are placed on the exact dates of full moons for each year. The mean (or average) conception date for each year is indicated on the chart by the white triangles, with the exact date given.

It’s immediately clear: Despite the moon’s widely rotating cycle of full-phase dates, the majority of does were bred during the last two weeks of November and first week of December almost every year. The mean or average “center” of the breeding fell within a 7-day period every single year, and for eight of the nine years it fell in the same 4-day period: November 26-29.

Remember, this is not to say that hunters observed the most deer movement or the most chasing activity on these dates. These are the dates when does were actually bred. If you want to be in the woods of New Brunswick when the most does are in estrous, you’re safe taking your vacation the last week November, year in and year out, no matter what the moon looks like.

If you’re still a doubter, luckily New Brunswick DNR isn’t the only agency that has collected large sets of breeding data like this. Researchers at the University of Georgia, led by David Osborn and Dr. Karl V. Miller, dug up data from more than 2,500 does from wild populations in South Carolina, Texas, Mississippi, Missouri, Maine, Minnesota and Michigan. They found between 3 and 19 years worth of data for each population, but they did not find a correlation between moon phase and timing of breeding at any of the locations. In their summary, the researchers wrote:

“Our analysis revealed that the relationship between annual breeding dates and moon phase chronology was highly variable. Therefore, we believe it is not necessary to revise the conventional understanding among deer biologists that breeding dates are primarily influenced by photoperiod (day length) and are relatively consistent among years within a particular population.”

Just Get in the Woods

Researchers have found that the timing of daily deer movement fluctuates slightly with certain moon phases, and you can watch a QDMA video interview with researcher Marcus Lashley about this topic below. Science has also shown that deer movement patterns observed by hunters can be affected by fluctuations in food sources like acorn crops and hunting pressure. But when these factors change the amount or timing of movement witnessed by hunters, they are not changing breeding dates. Year in and year out, peak breeding dates are remarkably consistent at a given location, regardless of variables like moon phase and weather.

So, if you’re looking for a rut prediction for the region you hunt, don’t look at the moon. Look at peaks in breeding activity in previous seasons. Chances are excellent that most does will come into estrous right around the same time every fall. If you can go, drop everything and get to the woods!