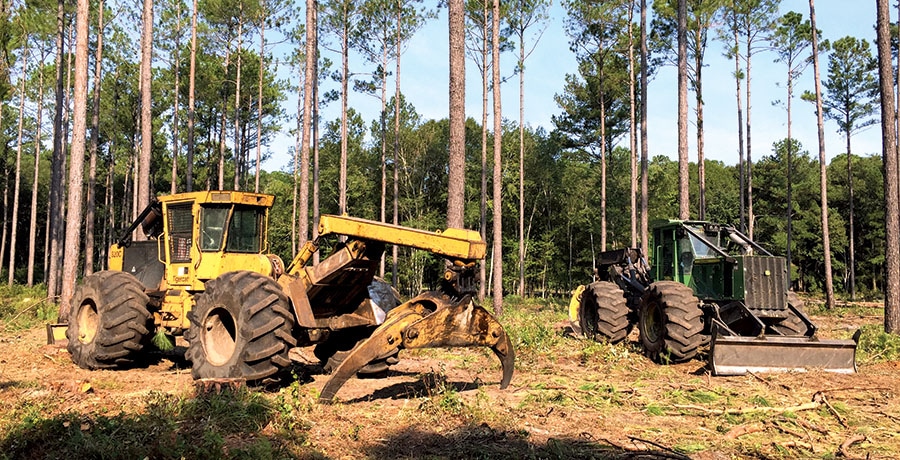 I had just begun my first job with a forestry consulting company when, one late spring day, I followed my boss through the woods with a scale stick and a paint gun, prepared to mark timber for sale. As we neared the stand of hardwoods that needed our attention, my boss stopped suddenly in his tracks. He looked toward a brighter part of the forest, where new openings in the canopy illuminated a cable skidder. Upon closer examination, the skidder was among cut stumps that were on the property we were there to mark. We had happened upon a timber theft in progress.

Not long after this discovery, I was back on the property, numbering tree stumps with spray paint and recording their location, height, diameter, and species. This information would be used to produce an estimate of the timber’s value for the landowner to present in court.

Timber theft, sometimes called poaching, can take many forms. When a stand of trees is marked and sold “lump-sum,” an unscrupulous logger might expect to get away with cutting a few extra trees that were not marked or sometimes taking just a few that are over the line on a neighbor’s property. When timber is being paid for on the basis of “mill-run” volume, meaning how much material arrives at the mill, landowners and managers must be careful that every truck load that leaves the site is accounted for to ensure that all of them are paid for. Even still, it is possible for logs to disappear between the loading deck and the mill. In these situations, it is known that timber is being harvested, so while there is an easier opportunity to pull a fast one, there is immediate cause for vigilance.

Perhaps more unsettling are those cases in which a logger enters a property completely without permission and harvests trees unbeknownst to the landowner. When such cases occur, the victim is typically an absentee landowner who rarely, if ever, visits the site.

Whether you own land, have permission to hunt on private land, or lease private land for hunting, there are some things you can do to prevent, recognize, and respond to unauthorized tree cutting.

How to Prevent Timber Theft

The first and most important means of preventing timber theft is to maintain the property boundary lines.

Imagine yourself as a timber thief. If a property line is marked recently with paint and has signs posted along it, you would probably be apprehensive about putting your saw to trees on the wrong side of the line. However, if the line is unposted, poorly maintained, or entirely unmarked, the owner is probably not watching closely enough to catch you in the act or even notice that the trees are gone. You would also have a strong argument that you “accidentally” cut the wrong trees.

Unscrupulous woodcutters have a wealth of information available to them through publicly available land tax records, and they can use this information to target non-local landowners. Keep in mind that having a hunter post and patrol a property can be thought of as a benefit for a landowner who allows a hunter or group of hunters to have access to the property. In cases where little boundary line evidence can be found, it may be necessary to hire a land surveyor.

Timber theft can of course happen as part of a timber sale that the landowner is aware of.

“If you plan to sell timber, make sure you have a written agreement,” said Jonathan Calore of the South Carolina Forestry Commission’s Law Enforcement Division. “That is the biggest thing that will help you in the long run.”

Some individual states estimate that millions of dollars in timber are stolen annually, so the national figure, if we knew it, is probably shocking.

At a minimum, a contract should specify the sale price and identify which trees are being harvested and which are not. Ideally, the trees being cut should be marked with paint, including stump marks to differentiate cut trees from reserve trees even after they are harvested. For these purposes, you might also benefit from involving a forestry consultant. In some states, offering forestry advice requires a license but offering money in exchange for timber usually does not.

“At the very least, check into a logger’s background before agreeing to sell any timber,” said conservation officer Mark Vencak of the New York Department of Environmental Conservation. “Do your homework. Make sure the logger you are dealing with is reputable.”

When You Suspect Theft

Take note of the activities occurring in the area surrounding the property you own, manage or hunt. If someone is cutting trees on a neighboring property, pay attention to their activities. Walking the boundary lines will be most helpful in monitoring the activities on a property. Not only are trees more likely to be stolen near a boundary line, but tracks from logging equipment where the property line was crossed can lead you to the site of stolen trees when they are not cut near the boundary. This also gives you an opportunity to ensure that posted signs have not been removed.

If you happen upon a timber theft, notify law enforcement and gather whatever information you can, including photographs. If the information is available, law enforcement will want to know what was taken, from where it was taken, when it was taken and who it was taken by. When timber theft is discovered, it is often after those who cut the wood have absconded. Talk to neighbors to find out if they know who was logging in the area around the time you suspect logs were taken. Look for equipment tracks to determine where the wood was taken to a road. Identifying the “landing” site could go a long way in determining guilt. If you catch a thief in the act, do not get into a heated confrontation. Let law enforcement officers deal with this.

If you own the land, you should also be wary about accepting any payment for the cut trees, especially if you don’t know how many were taken or what their value is. Once you accept payment, it is no longer a clear case of theft, and you may be stuck with compensation that does not approach the full value of the wood. If a culprit is identified, it may be necessary to hire both a licensed land surveyor to prove trees were cut on a given property and a forester who can conduct a “stump cruise,” using any information still available at the site to estimate the value of the trees that were cut.

Some individual states estimate that millions of dollars in timber are stolen annually, so the national figure, if we knew it, is probably shocking. Awareness on the part of hunters and landowners – especially those who already have a communication network through a QDM Cooperative – is one of the fastest solutions to this growing problem.