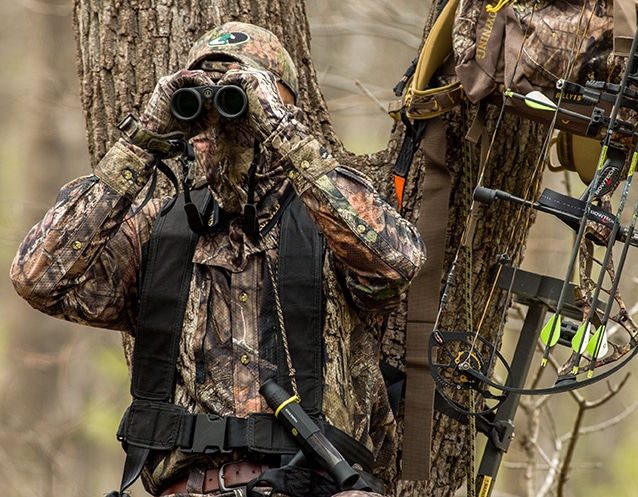 It’s a tried and true piece of advice you hear from deer hunters throughout the country. Save your best spots until the best time of the year. Don’t go in and muck up an area. Wait until the rut. Stay out of your favorite stand until November (or whenever the rut happens to peak where you hunt). The real question is why should we always wait to hunt our favorite stands, or not go into our very best spots until the famed time of the year, the great month of November? The answer lies in the power of the first sit. The first time sitting a treestand. The first time you walk into a particular area. This doesn’t automatically mean you have to wait until the rut or the month of November to hunt your favorite area, but by waiting until the exact right conditions to hunt a particular site, that first sit is more often than not your best time to harvest a mature buck.

What Makes The First Sit so Powerful?

There are a variety of factors that play into the first time sitting a treestand being your best time to put a mature buck down. The major one that most people worry about is pressure. The last thing you want to do is spook a mature buck out of the area before you even have a realistic chance of harvesting him. By hunting your best stand multiple times before the time is right, it’s easy to alert a buck to your presence, causing him to use the area only under the cover of darkness or skirt the area completely. Even though you may go in and not lay eyes on any deer or a particular buck, your presence and most likely your scent is having an impact.

This has been well established in research. Writing in the October/November 2014 issue of Quality Whitetails, Clint McCoy described his Auburn University research following GPS-collared bucks on a hunted study area. Bucks immediately changed their movements within their home ranges to avoid stand sites as soon as they were hunted.

“This avoidance lasted on average for three days,” wrote Clint. “By the fourth and fifth days following a hunting event, the response was no longer significantly different from neutral, and thus deer were no longer considered to be avoiding the hunted stand – though they still were not ‘attracted’ to the site as they were before the stand was hunted.”

Almost the moment it was light enough to see, I was covered in deer. A little after 9 a.m., I looked up and saw a mature 10-pointer working his way right toward me. He was grunting over and over again with each step he took.

There is much more evidence explaining how hunting pressure affects mature buck movements. QDMA’s Matt Ross summarized a lot of it in a great article titled “10 Things We Know About Mature Buck Movements,”.

Many, many times, hunters report their most successful hunts occurred the first time they sat in a new stand. Research into the effects of hunting pressure helps explain why. Leaving that number one area of yours alone, or the area where your top buck calls home, can be a difficult thing to do. It’s natural to want to pursue a particular buck as soon as you can, or simply to hunt a new and exciting area even when you aren’t after a specific buck, no matter what the conditions present. If you do succumb to the urge of wanting to hunt that buck or area as soon as possible, you may still get lucky, but with mature bucks you need to put as many odds in your favor as you can. Going in full-steam ahead without considering your timing will most likely reduce your chances of putting a tag on a buck.

To give yourself the best chance possible of harvesting that mature buck you’ve been after, or any mature buck, it’s not as cut and dry as leaving your stand alone until the calendar rolls up November 1. I like to think of my plan as a surgical strike. Think of how carefully a surgeon performs their job. If you use that mental approach with hunting a certain area or a certain buck, your odds of connecting with a mature buck will go way up.

An example of a surgical strike is when you are after a particular buck and know that he is moving during daylight hours in a location you can effectively hunt him. Patterning a buck in a specific location and time is the green light you are looking for. If you have a trail-camera in the general area of your stand, and you are able to check it stealthily or rarely (or even better, remotely), and it’s telling you a buck is on his feet during shooting light, then it’s time to act.

In such a situation, should you wait for perfect weather conditions or a certain moon phase? Though some hunters might say yes, numerous scientific studies of buck movement show only that they move most on any given day at dawn and dusk – temperature has not been shown to be a strong influence, nor has moon phase. If your cameras or other actual sightings are revealing a pattern at the right time in the right place, don’t wait.

Wind speed hasn’t proven to be a significant factor in buck movements, either, but that’s different than wind direction. You need the right wind for your stand to be part of the game plan. It does no good if deer move downwind of your stand the first time you hunt there.

What if you aren’t following a particular buck or bucks, but you know of historically good areas that always produce mature buck movement? The same studies I’ve already referred to agree that bucks are most active, and have the highest rates of daily movement (both night and day) during the rut. These movement rates increase steadily throughout the pre-rut, peak with the peak of breeding, and decline afterward. For these prime stand areas you know about, it is best to wait until the peak of the rut is approaching in the region you hunt. If you are able to wait until this time of year, the chances of that first sit producing a mature buck sighting are much higher. Not having pressured an area, coupled with increased movement from rutting activity, can lead to a first sit being stellar.

Further, if you have established multiple stand sites or have good areas in mind for this prime time, then you can rotate from area to area (being careful about wind direction as always). This prevents pressure from building up in one area, allows each stand time to recover so that you might return to it again later, and keeps you moving to new “first sit” stands again and again during the short window of the rut.

What about public land? “First sits” are just as powerful here, and there are other factors to consider.

Let’s go back to 2010, the first season I ever applied this tactic. I had an area in the middle of a giant piece of public land in the big woods of northern Minnesota that I knew was good. In years prior, I always had trail-camera pictures of mature bucks, but always under the cover of darkness. I decided to wait until the perfect conditions to hunt the area this particular year. I stayed out of my stand until November 12, a full week after Minnesota’s rifle season opened. I waited until the perfect conditions, which included hunting a Monday when there weren’t nearly as many hunters in the woods. That morning I slipped into the stand, after not touching the area since September (when I checked my trail-camera). Almost the moment it was light enough to see, I was covered in deer. Bucks were chasing all over the place for the first couple hours of daylight. A little after 9 a.m., I looked up and saw a mature 10-pointer working his way right toward me. He was grunting over and over again with each step he took.

I let him walk into my shooting lane at 20 yards where I took the shot and successfully harvested my first mature buck. I am convinced my success was based on one simple thing: waiting.

It wasn’t easy, though! I wanted to go in the first day of archery season and hunt, but I felt that by being patient and waiting until the exact right time for that first sit to happen, I would have a better chance. That’s exactly what happened.

Waiting for the perfect day to hunt your best buck or a favorite setup can be excruciatingly difficult. If you want that first sit to be as powerful as it can be, the wait will be worth it. Hunting mature bucks is all about stacking as many odds in your favor as you can. Wait for the right conditions, execute the strike, and that first sit might just lead to a happy hunter at the end of a blood trail.

Alex Comstock is the founder of the blog WhitetailDNA.com. He is a passionate deer hunter from Minnesota and currently lives in North Dakota. He has writing credits with a number of hunting magazines and WiredtoHunt.com. Follow Alex on Twitter and Instagram.