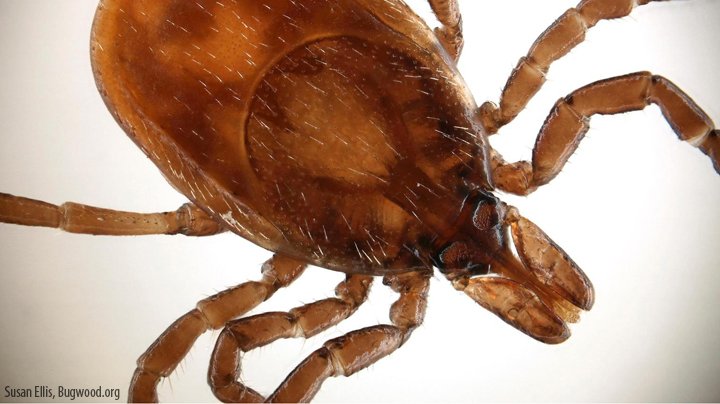 Two kinds of venomous snakes dwell in the mountains and valleys of Southwest Virginia where I live and hunt: the Northern copperhead and the much more dangerous timber rattler. I used to say that I had rather be bitten by a Northern copperhead than a tick carrying Lyme disease, but the rattler I thought the worst of the three. Now after contracting the disease, I’m not so sure the bite of a rattlesnake would be worse.  And I experienced a very mild case of Lyme.

It’s early August as I write this, and QDMA members will soon be spending even more time outdoors as we plant fall food plots, conduct scouting and tree-stand hanging expeditions, and commence hunting as bow seasons open.  And during all those activities, the black-legged tick (the carrier of Lyme disease, also known as the deer or seed tick because of its barely visible size) will be there, too, waiting to attach itself to whatever creature ambles by.

What is also worth noting is that ticks are often active well into autumn. Just because the leaves turn and fall doesn’t mean that the black-legged (and other tick species for that matter) will have become dormant.  I want to share what I’ve experienced, and the precautions I take, so your chances of contracting Lyme disease will hopefully be less.

I was bitten on April 10, 2012 while walking across a cow pasture in Augusta County, Virginia. On that day, the temperature was in the lower 40s, the wind chill was in the upper 30s, and I wore long pants, a long sleeved shirt and jacket, and had my pants tucked inside knee-high rubber boots.  My wife Elaine and I later found a half dozen or so black-legged ticks on me, several of which had become embedded.

By late May, I was feeling constantly fatigued, something I attributed to the end of the school year (I’m a high school English teacher) and too many mornings rising early to pursue spring gobblers.  By June, I was experiencing neuropathy in my left foot (toe tingling), and by early July the right one was similarly affected.

For years, I have been truly terrified that I would contract Lyme, and I knew the early symptoms, which in addition to fatigue and neuropathy can include the following: expanding red bulls-eye rash, fever, chills, headaches and body aches – none of which I experienced.  As the months pass other signs could include enlarged lymph glands, joint pain (especially in the knees), meningitis (inflammation of brain membranes), and Bell’s palsy (temporary paralysis of one side of the face).  Many months later, even after you feel that you have beaten the disease, these symptoms can appear: severe fatigue, eye inflammation, liver inflammation, and heart problems such as an irregular beat.

So after the toes on my right foot began tingling, I contacted my general care physician and told him that I suspected I had Lyme disease.  He immediately scheduled an appointment for July 13, and a week later, the blood work came back stating that I tested positive for Lyme.

The doctor prescribed doxycycline (the same antibiotic used to treat the Bubonic Plague) which made me far sicker than Lyme did.  I experienced nausea, sometimes severe and often so while in a vehicle, alternating bouts of diarrhea and constipation, and mouth ulcers.  The doctor told me to avoid sunlight because it can cause rashes when you are on doxycycline.  I took the medicine for 30 days.  One day in school I became so nauseous that I considered asking my principal if I could go home.

The good news is that the early diagnosis and treatment seemed to have worked.  I received another round of blood work and antibiotics in March.  And in July, 2013 I tested negative for Lyme Disease.  But my immunologist cautioned against me feeling “cured,” because the belief among many physicians (and many members of the medical profession will admit that they frequently misdiagnose Lyme) is that doctors still don’t know a great deal about Lyme, and that it can reoccur.  Indeed, my immunologist wants me to have a spinal tap and brain MRI this November.

While my prognosis is good, my wish for those who’ve never acquired Lyme disease is that they stay that way. Here’s my advice for this fall, before you enter the deer woods to scout or hunt, that can help you avoid Lyme disease.

• Wear products that have had Permethrin (a natural tick and mosquito repellent) bonded to fabrics. One such company, Gamehide and its ElimiTick line, has taken advantage of this repellent through an agreement with Insect Shield, which created this technology. I wore ElimiTick camouflage throughout the spring gobbler season and never had a tick on me.  I wore Insect Shield outdoor clothing during the summer with the same fantastic results.

• Upon arriving home, shower and then use a hand-held mirror to do a thorough tick-check. I’m not trying to be indelicate, but you may also want to have a family member examine you.  The deer tick nymph stage is less than 1/16 of an inch.

• If you find embedded ticks, use tweezers to remove them. According to the Centers for Disease Control, “In most cases, the tick must be attached for 36-48 hours or more before the Lyme disease bacterium can be transmitted,” so timely removal is important. For more information, the CDC has an excellent web page about Lyme disease.

Bruce Ingram is a QDMA member and freelance outdoor writer from Fincastle, Virginia, and he is a regular contributor to QDMA’s Quality Whitetails magazine. Bruce writes a weekly blog titled Bruce Ingram Outdoors.