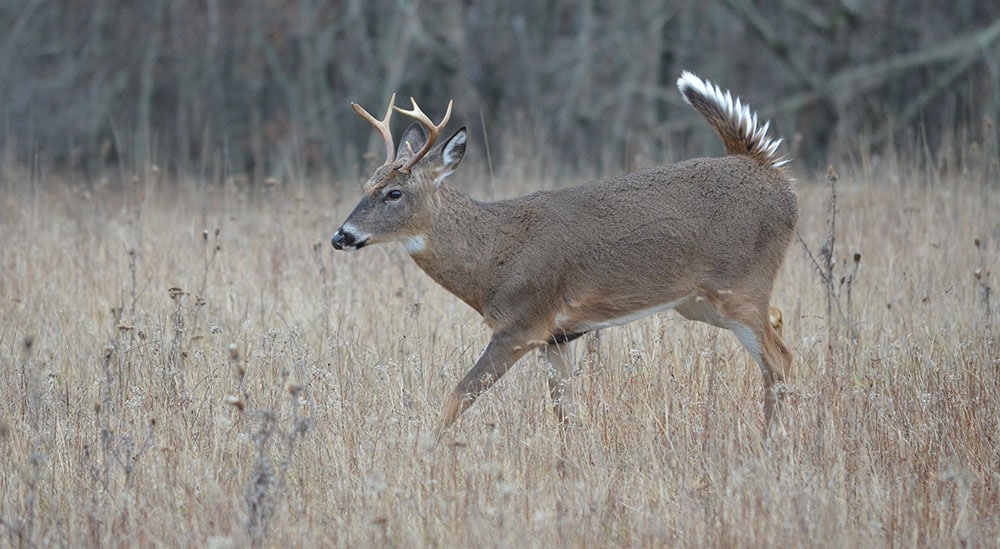 You hear it commonly from all ranks of hunters, no matter their experience level. It’s the kind of thing grizzled veterans exclaim loud enough at the local coffee shop everyone within earshot catches it, or millenials openly share in a social media post that randomly pops up in your feed. Either way, the sentiment is generally the same regarding the quality of deer hunting on public lands:

The reasons typically cited for such a statement? Too many hunters. Not enough deer. No older bucks. The list can seem endless.

But, how true of a declaration can this possibly be? Well, new research out of the University of Delaware is providing unique insight into at least part of the reasoning some hunters make such a claim; the rate at which yearling bucks, those in the 1.5-year-old age class, are harvested during the deer season on public versus private ground appears to be quite a bit different — at least in Southern Delaware, where the research took place and QDM is fairly routine. Postdoctoral researcher Jacob Haus and his coauthors found that the survival rate for yearling bucks within the study site was nearly 75 percent on private parcels, while it was only 37 percent for yearlings that spent any time on public hunting land during hunting season.

But all public hunting lands aren’t necessarily created equal. Compare that with data out of nearby Pennsylvania where survival rates on public ground can be astronomically high, rivaling some of the best private ground in the country. For example, a large undisturbed block of public ground in WMU 2G (Susquehannock State Forest) that’s being studied as part of the long-running Deer-Forest Study sees yearling buck survival rates of 80 percent or more!  Sure, that’s partly because of the statewide antler regulations there, however, hunter density in the big woods zone of Pennsylvania can be incredibly low because of the long distances between roads, unbroken forest and hills that are high, numerous and steep, leading many resident bucks to go unseen through an entire hunting season. In fact, evidence shows many WMU 2G bucks live far past maturity and the minimum antler size, yet local hunters still make the same strong statements of the hunting experience there “stinking.”

Regardless, while some QDM-minded, public land hunters may use this new information out of Delaware as a means to get mad or upset with the state or federal authority that oversees public hunting land near them, we see it as an opportunity.

QDMA recently announced new 5-year mission goals, and among them include efforts to improve public deer hunting land across the country.  One way we’ll do this is through our amazing grassroot network of over 230 QDMA Branches, led by thousands of local conservation-minded volunteers, by more than doubling the number of Branch-initiated habitat improvement projects on public land. With better habitat available, the quality of hunting will indeed improve. We are also going to strengthen and leverage the partnerships that QDMA has with state and federal agencies, with the objective to directly enhance deer herds and habitats on public hunting lands to provide greater QDM hunting experiences for everyone to enjoy.

For 30 years QDMA has been an industry leader of developing deer management educational materials. So, one potential outcome of these partnerships could be to erect educational displays on as many public lands as possible, informing users of the benefits of QDM, how to identify young bucks, methods to more consistently see and kill mature bucks, and more. The point is, we have the resources. We just have to get them in the right hands.

Another mission goal is to increase the area in QDM Cooperatives by at least 6 million acres by 2022. Our best estimate says there is just shy of 30 million acres out there right now in some form of deer management Cooperative, defined as folks who work with their neighbors in an effort to improve the local deer hunting experience. While it should come as no surprise that most of this acreage is privately-owned (if you look at where whitetails live in the United States, at least 90 percent of their range is private land), QDMA has a good track record of developing Cooperatives that include both public and private land. So, greater efforts will be placed on identifying these types of situations and providing technical assistance on-the ground so that we see more of them. And, the silver lining? Haus’ research shows that in areas where the majority of hunter’s support QDM-style of hunting, survival of young bucks can be quite high.

But, we need help identifying the areas that need our influence the most.  Help us, help you.

What public lands need better habitat? Which ones need educational displays? Where are the areas that the majority of yearling bucks are killed? We can’t possibly know them all. So, instead of hearing such statistics and cringing, like nails on a chalk board, consider getting involved in the QDMA and assisting us achieve these goals!

If you’re not a QDMA member, join. Look up your closest QDMA Branch, or better yet contact one of our Regional Directors and find out what it takes to start a Branch in your community. The QDMA is dedicated to ensuring the future of white-tailed deer, wildlife habitat and our hunting heritage, and it’s very possible that with your involvement we can change the face of deer hunting where you live and hunt.