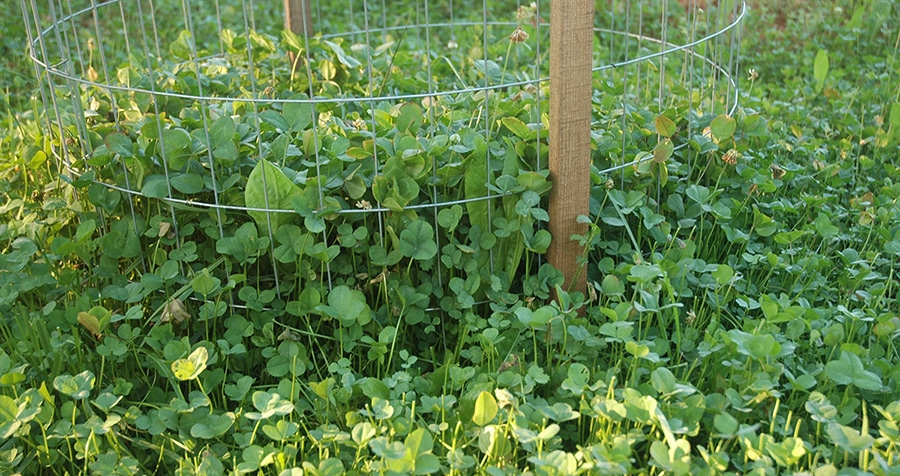 When it comes to planting food plots for white-tailed deer, it’s hard to beat clover for several reasons. Clover is relatively easy to establish, readily available, affordable, and there are a variety of species to handle most any climate or soil type. To put it simply, clovers are a very versatile deer forage.

Over the years, we’ve covered several species of clover here at DeerAssociation.com, as well as a variety of other topics pertinent to planting clover food plots. We felt it would be good to incorporate all of this great information into a single post, so here you have NDA’s Guide to Clover Food Plots.

Let’s begin with profiles of several clover species worthy of your consideration. These profiles are shorter versions of the ones featured in Quality Whitetails magazine, the publication for NDA members.

Arrowleaf Clover – Arrowleaf clover is a cool-season annual that is highly productive in fall and spring and a top-choice forage for whitetails. Though it’s an annual, arrowleaf clover is a heavy re-seeder – with the right management, you can get several seasons of production out of one planting.

Berseem Clover – Berseem clover is also a cool-season annual. It has oblong-shaped leaflets that are fairly large relative to other clovers. While tolerant to a variety of soil types, it is known for being a poor re-seeder and not winter-hardy.

Ladino Clover – Ladino clover is a cool-season perennial legume that spreads by stolons. In the proper growing environment, ladino clover can persist for four to five years, particularly in northern climates.

Red Clover – Red clover is a cool-season legume that is classified as a biennial with a two-year lifespan, but with proper management it can persist for three or more years in the mid-South and northern states.

While stands of pure clover can serve as excellent deer food plots, clover is often incorporated into a seed mix with other species. These other forages can provide white-tailed deer with a food source while the clover is becoming established or – in the case of chicory – during the warmer months of summer when clover isn’t producing a lot of forage. Here are profiles of a few of those complementary species, as well as an article with a few suggested clover seed blends.

Cereal Rye – Cereal rye is a cool-season annual cereal grain that germinates very quickly, is highly preferred by deer, and has excellent resistance to grazing pressure.

Oats – Oats are a cool-season annual cereal grain that consistently rank among the top species consumed by deer in forage preference trials.

Wheat – Wheat is a cool-season cereal grain that is easy to establish, quick to germinate, and a great choice for fall hunting plots, especially when mixed with other species such as clovers.

Chicory – Chicory is a tough cool-season perennial crop that is a preferred deer forage. The leaves of chicory are highly digestible and carry a protein level between 15 and 30 percent.

Try These Cool-Season Food Plot Mixes – Here are a few recommended food plot mixes — most of which include clover — from Dr. Craig Harper, a professor of wildlife management and the Extension Wildlife Specialist at the University of Tennessee.

To get the most from your clover food plot, there are a few important steps you can take prior to planting. Here are a few links to get you started.

Take a soil test – Don’t skip this important step to planting a successful food plot. Without a soil test, you have no way of knowing how much lime and/or fertilizer your food plot needs to maximize forage production.

Cultipackers for Food Plots – An important part of planting clover is starting with a good firm seedbed so you don’t plant your clover seed too deep. A great way to do this is by using a cultipacker on the plot prior to and after planting.

How to Frost-Seed – Frost seeding clover can be a great way to plant a new stand of clover or rejuvenate an existing one with minimal equipment use.

Once established, clover food plots need to be properly maintained in order to provide maximum forage. This often involves a herbicide treatment or mowing. Below are a few links to help you with the maintenance of your clover plot.

The Deer Steward’s Guide to Herbicide Terms – Before working with herbicides it is important to understand these common terms associated with them.

5 Herbicides Every Deer Steward Should Know – While there are hundreds of herbicides on the market, these five will handle your most common weed issues in food plots.

3 More Herbicides Every Deer Steward Should Know – In this article we dive a little deeper and cover a few more herbicides that may be beneficial to your habitat improvement efforts.

If you’re planning a new food plot where you hunt, or just looking to try something different in an existing plot, don’t overlook a good clover mix. It may not be as “sophisticated” as some of the fancy blends available these days, but we can assure you the deer won’t complain.