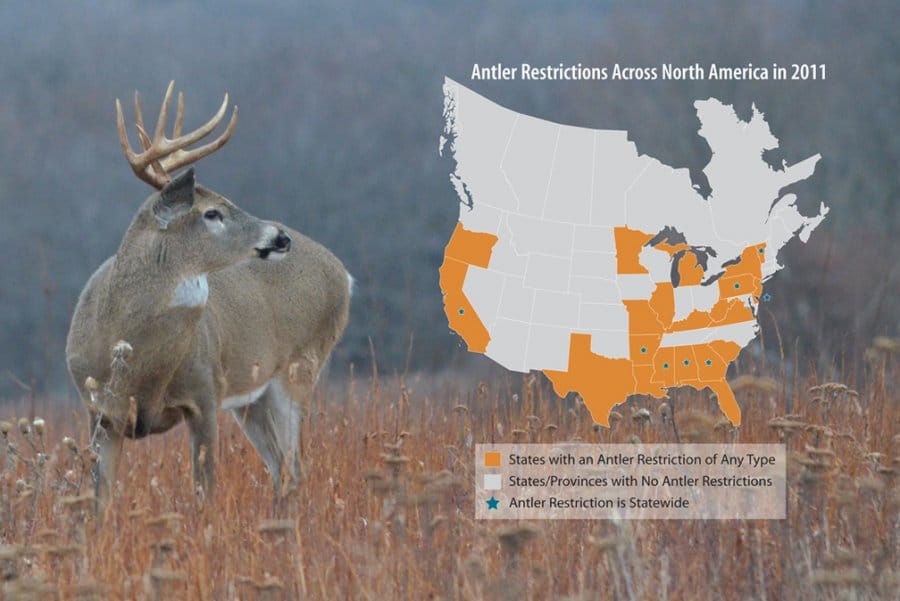 Some hunters love them, others hate them, but you can rest assured all have an opinion of them – we’re talking about mandatory antler restrictions.

In general, QDMA prefers the voluntary passing of yearling bucks to mandatory antler regulations. However, we recognize that antler restrictions may be justified in some situations to achieve specific deer management objectives. Regarding our position on specific antler restriction proposals, QDMA examines each on a case-by-case basis and applies a three-part test.

Second, is it supported by the majority of affected hunters and landowners? Agencies considering an antler restriction should conduct surveys to determine support levels before enacting the restriction.

Finally, will it be objectively monitored to determine success or failure? Without monitoring, there is no way to know if the restriction should be altered to improve success or possibly removed altogether if it doesn’t work or is no longer needed.

Many restrictions fail one or more of these criteria. The QDMA has supported some antler restrictions, opposed others, and taken a neutral stance on still others. In the long term, QDMA is optimistic that enough hunters will voluntarily pass young bucks that antler restrictions will become unnecessary and even cumbersome to more sophisticated management.

Regarding type, the number of states using point, spread and combination restrictions in 2011 were identical to 2008.

Regardless of strategy used to protect yearling bucks, QDMA recommends that state and provincial wildlife agencies conduct extensive education and outreach programs to inform hunters about the benefits of protecting yearling bucks and to garner their support for sound deer management programs. The key to implementing an effective strategy is to devise it from local data and then educate local sportsmen and women on the benefits.