Radishes (Raphanus sativus) are somewhat of a newcomer to the food plot menu for whitetails. Native to Asia, radishes are produced for a variety of uses but are primarily grown for food. In the United States, forage radishes typically aren’t grown for food but instead as a winter cover crop that can bust through hard pans with its long tap root, prevent soil compaction, and increase organic matter. These soil management benefits combined with the high nutritional value and overall level of attraction give radishes a lot of promise and may eventually lead to moving this menu item from the “new dishes” to a more stable entrée selection.

Radishes are considered a cool-season biennial forage that is fast-growing and produces a long, white taproot. The taproot can reach lengths greater than 30 inches with some varieties, which helps break through deeply compacted soils. The leaves are thick, fleshy and deeply lobed and can reach about 18 inches tall, depending on soil fertility and planting density.

Radishes belong to the brassica family, which also contains other commonly planted species for deer, such as rape, kale, and turnips. Several improved varieties of radishes now exist and are managed in food plots, such as Daikon, Trophy, Tillage, and Groundhog. 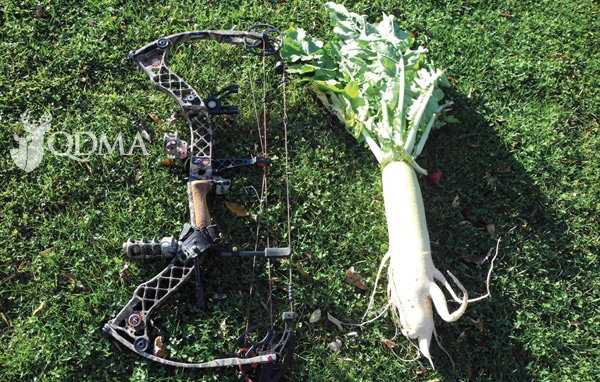 Radishes are very versatile and are adapted to a wide range of soil types and conditions, and they are relatively drought tolerant. However, radishes do not perform well in wet soils. They do best in loamy soils. Additionally, they are less cold tolerant than the other brassicas, but in comparison are considered to be more attractive before a frost. This is an important factor for early season hunting strategies if planting brassicas.

Although deer readily consume the green forage that is the plant’s top growth, it is typically not highly preferred compared to some of the other cool-season forages. However, the taproot also provides an excellent source of energy during winter. They are also relatively tolerant to heavy grazing pressure.

With regard to food availability, radishes are highly productive and can easily produce 2 to 3 tons/acre (dry weight) of forage along with another ton per acre of root growth. The forage contains greater than 30 percent crude protein, and the roots are reported to contain greater than 20 percent protein. It is also highly digestible.

As with planting any food plot, soil testing should be conducted to determine how much lime and fertilizer is needed to make sure soil fertility and pH are desirable. This will ensure deer and other wildlife on your property are provided with a quality stand of highly nutritious and attractive forage.

Phosphorus and potassium fertilizer should be applied according to levels recommended from a soil test. Adding nitrogen at 60 lbs./acre at planting and then again a couple months following will significantly increase production. It is also common for a soil test to recommend 1 to 2 lbs./acre of boron when planting radishes. That’s true for other brassicas as well.

Finally, be sure the planting surface is smooth and firm before broadcasting seed. This will promote optimal germination and growth, resulting in a healthier stand that can better withstand harsh weather conditions, diseases, grazing pressure, and weed pressure. If no-till planting (either drilling or top sowing), kill the existing vegetation with glyphosate a few weeks prior to planting to eliminate weed competition and create bare ground for good seed-to-soil contact.

When planting radishes, broadcast seed at 12 lbs./acre in early August in northern states and in mid- to late September in the Deep South. Radishes can also be spring planted in the North after soil temperatures reach about 50 degrees F. Planting depth should be about ¼ to ½ inch.

I typically recommend planting radishes alone or in mixtures with other brassicas, as this allows for maximum forage production. Also, because they develop fairly quickly with tons of leafy biomass, radishes can overcrowd and suppress lower growing or smaller forages. Since some of the other brassicas such as kale or rape are more cold tolerant than radishes, I often include one or both of these in a mixture, especially in northern regions that experience prolonged cold weather.

Below is a planting mixture containing radishes and other brassicas that I’ve had good success with:

Another benefit of radishes is they can be successfully planted via no-till top sowing. This is an excellent option for secluded plots or if you lack large equipment for conventional tillage. All that is needed is a sprayer and a seed spreader. Simply kill the existing vegetation with glyphosate a few weeks prior to planting, and broadcast the seed on top of the ground just before a rain. You can also use an ATV or other vehicle to firmly press the seed into the soil. When using this technique, keep in mind the overall planting process needs to begin a couple weeks earlier than with normal seedbed preparation to provide more time for the plot to establish.

Overall, radishes have many positive attributes as a food source for deer. However, as with all other brassicas, deer use of radishes will be inconsistent across the board. In some areas deer will demolish every piece of the plant they can get their mouths on, while in other nearby areas they may not even touch it. There really isn’t a good explanation for it other than “That’s just the way it is.”

Nonetheless, you simply have to experiment with it to see how deer respond to it on the property you hunt and manage. However, even if deer don’t take to it the first time you plant it, be patient. You may not be able to keep them off of it the second time around. Plus you get all the soil-improvement benefits that radishes can provide to enhance your food plots for successive plantings.