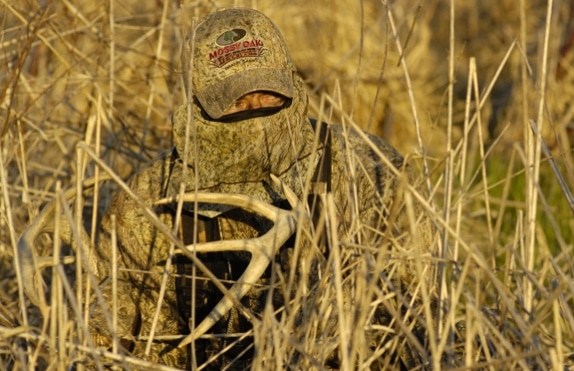 One of the joys of Quality Deer Management (QDM) is the increased effectiveness of rattling, grunting and other techniques for attracting mature bucks. Rattling in a mature buck is a lot easier when there are mature bucks around to hear you.

Where I hunt in coastal Georgia, rattling was useless until my dad, brother, sister and several of our neighbors started protecting yearling bucks. Now there are more adult bucks to respond, and there’s an increased level of rut competition since numbers of does and bucks are roughly balanced.

So it was that in 2012, during the peak of our rut in late October, I rattled in a small 8-pointer. After studying him through my binoculars, I estimated him to be 2½ years old, and I eased my bow back onto its hook. I noticed the end of one of his beams was blunt, as if it had been injured and broken off while the antler was still growing.

I met the blunt-antlered 8-pointer again the next afternoon. He was swinging from a community skinning pole.

I was faced with a critical moment in the success of any QDM effort: Talking to neighbors who don’t practice QDM, or don’t protect the same age classes of bucks you do.

My first reaction was disappointment, of course. But I know that judging or disparaging someone else’s legally taken deer makes enemies and works against any hopes you have of getting more neighbors to practice QDM. Maybe he never killed a 2½-year-old buck before, so for him that was the right buck. Even if he’s killed a pile of 2½-year-olds, who am I to judge someone taking a legal deer that makes them happy?

I didn’t know the hunter, but it turned out he hunted just across the creek from us.

“I saw that buck yesterday, and I guessed him to be 2½,” I said. “Would you mind if I pull the jawbone to see?”

He didn’t mind. In fact, he and other hunters at the skinning pole watched with curiosity as I removed the buck’s jawbone. It was a classic 2½-year-old: all permanent pre-molars but with almost no wear on the crests of the molars. Five or six people crowded around to hear me explain why the jawbone suggested 2½ years. I gave the jawbone back to my neighbor and congratulated him on a fine buck.

I believe I planted a seed that has a chance to take root and grow. Some hunters have never given much thought to buck age before. Simply exposing them to the concept can start wheels spinning on their own.

Many hunters in our community now practice QDM and enjoy success, and we’ve never pushed or preached. We’ve led by example, making sure we are seen at the community skinning pole collecting data, weighing does and bucks, pulling jawbones and, of course, bringing in mature bucks.

Think of it as rattling. Put yourself in a good location in your community and make a little noise about your QDM efforts. You’re not forcing anything on others, you’re just giving them a chance to see what you’re doing. You may be surprised how many curious responses you get.