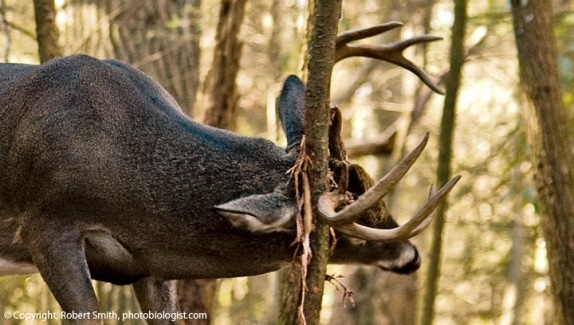 From years of running trail-camera surveys on individual managed properties, I’ve become a firm believer that harvest success is often the greatest limiting factor to overall perceptions of Quality Deer Management success. It is one thing to produce a “biologically successful” program with an older buck age structure through proper management practices. It is a completely different matter for hunters to see tangible results from that successful program in the form of older bucks hanging on the meat pole. I don’t think many hunters will argue with the assertion that mature bucks are not easy animals to successfully see and kill, even when they exist in greater numbers. Producing desired deer movement patterns can benefit management effectiveness by helping to hold deer inside the boundaries of managed properties as well as improving the hunting experience and harvest success by producing more predictable deer travel routes. Thus, enhancing natural deer movement patterns through artful habitat management may just be the missing piece of a complete QDM puzzle.

Can knowledge of buck rubbing locations help develop more effective habitat plans – plans that produce more predictable deer movement patterns? In the late 1990s, my mentor, Dr. Grant Woods, suggested I duplicate a portion of his research concerning buck signpost rubbing behavior. One of the focal points of Grant’s research was the role habitat edges – the defining line between two habitat types – play in rub locations. Many species of wildlife, including white-tailed deer, are often considered “creatures of the edge” since they spend considerable amounts of time in close association with habitat edges. These habitat edges can be classic “hard” edges, like the transition from a canopied forest to open habitat such as a field, food plot or agricultural field. Or they can be more subtle “soft” edges, like transitions in forest species and/or timber age. Regardless of the edge type, deer often use habitat edges as concentration points and travel corridors. As the rut approaches, bucks produce rub lines along their travel corridors, and if they are incorporating habitat edges into their travel patterns, measurements of rub densities and distributions should find that rubs appear in higher concentrations near habitat edges.

My study was designed to duplicate Grant’s earlier work. The study design involved mapping all of the different habitat types on a hunting property in west central Tennessee and classifying them into a number of categories. The defining lines between categories were marked as habitat edges. To produce rub sampling areas, long transit lines, or data-collection lines, were randomly placed across the landscape. Rub data were collected by walking each transit line each year in mid-winter and recording the number of rubs that were within 10 meters on either side of the transit line. As rubs within the sample area were documented, each rub was classified by the habitat type in which it was located. In addition, the distance from the rub to the nearest habitat edge was measured and the type of habitat edge recorded. The study was run along the same transit lines for 10 consecutive years.

In addition to habitat edges, other linear features also were analyzed, such as roads and creeks (see Figure 1 in the Gallery below for a visual comparison). Both roads and creeks displayed some “edge effect,” but nowhere near as distinct or strong as habitat edges, with one exception. Old, abandoned log-skidder trails produce a fairly strong edge effect. Rub densities averaged 12.4 rubs per acre in the strips of ground within 5 meters of the trails and 5.5 rubs per acre within the strips 5 to 10 meters from the skidder trails. When looking at the data from different types of roads, it appears that the less maintained a road is, the higher the rub densities near it, suggesting the less a road is used and maintained by people, the more often it is incorporated into buck travel patterns.

These high rub densities near habitat edges and other linear features may be the result of bucks being influenced to make rubs every time they cross a habitat edge, but a majority of the rubs recorded in this study were parts of long rub-lines paralleling the habitat edges or were associated with staging areas into open food source habitat such as food plots. This suggests bucks are using these habitat edges as travel corridors or concentrated activity areas. Rub lines along the edge of or parallel to unmaintained roads or old skidder paths also were extremely common. For whatever reason, bucks appear to incorporate these linear features in their movement patterns. In addition, my detailed analysis of localized habitat diversity (the number of different habitat types in a given area) and hunter-collected deer observation rates display strong relationships. High localized habitat diversity usually goes hand-in-hand with high deer sighting rates by hunters. Highly diverse habitat also means many linear feet of habitat edge separating all those different habitat types. These results suggest hunting in locations with more habitat types and their associated edges has tangible benefit for hunters.

In Part 2 of this article, we’ll look at the effect of topography and terrain features on rub density, then we’ll discuss how to plan your habitat management efforts to produce more predictable buck movements.

Editor’s Note: Bryan Kinkel of Tennessee is the owner of BSK Consulting, a wildlife and habitat consulting company. He specializes in small-land management, deer herd photo surveys and deer use of terrain and habitat.