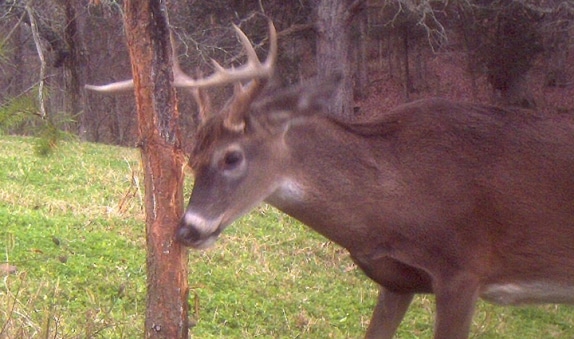 Can knowledge of buck rubbing locations help develop more effective habitat plans – plans that produce more predictable deer movement patterns? This is a question we tackled in Part 1 of this article when we looked at rub density by habitat type and near linear features. Now, let’s look at the effect of terrain on buck travels and rubbing behaviors.

The terrain of my study area, located in western middle Tennessee, is classified as ridge-and-hollow topography, consisting of long, narrow, meandering ridge-lines separated by steep-sided, narrow valleys. With terrain being such a prominent feature of the landscape, I was curious as to whether specific terrain features would display higher rub densities, suggesting more frequent buck travels along those topographic features.

Analysis of rub densities by topography found two types of terrain features displayed significantly higher rub densities. When removing all data from within habitat and linear feature edge zones, Valleys and Secondary Points both had rub densities 250 to 300 percent higher than the other three topographic features. Exactly why these features were used so heavily as rub-line locations is unknown, but with valley topography there was a strong correlation with good cover habitat and very high rub densities, while valleys consisting of open mature hardwoods displayed very low rub densities. In fact, cover habitat located in valleys and bottomlands displayed considerably higher rub densities than the same habitat located on other topographic features. Why were Secondary Points used more for buck rubbing activity compared to Primary Points? The answer may have to do with bucks using these slowly descending points dropping off the sides of ridges as “ramps” for easy access back and forth from valleys to uplands.

When the effects of 20-meter “edge zones” are analyzed for topography, all topographic features display large increases in rub densities. The already higher rub densities for Secondary Points and Valleys were increased dramatically when edge zones were present (refer to Figure 3 in the Gallery below).

Although I strongly believe that buck usage of habitat edges and other linear features as travel corridors is universal across the whitetail’s range, how deer use specific terrain features is most likely regional. Deer will probably find different terrain features “favorable” in different geographic regions. Only critical analysis of rub concentrations as a factor of terrain will decipher which are the preferred topographic features in a given location.

So, bucks prefer to rub and potentially travel more frequently along habitat edges, certain linear features and specific terrain features. For the manager of a property, how can this knowledge assist in habitat planning? As mentioned previously, sometimes producing more predictable deer movement patterns can be more than half the battle toward total QDM success.

As I’ve found to be true with many QDM programs, growing older bucks can actually be a lot easier than successfully seeing and harvesting those bucks. Anything the landowner/manager can do with their management program to increase harvest success is generally well worth the effort. With some forethought and knowledge of how the local buck population uses habitat and terrain, habitat plans can be developed to produce more predictable deer movement patterns. Considering that high rub densities occur along habitat edges and linear features, habitat edges can be designed to lie where you want the deer to go. And whenever possible, designing a habitat edge to run along favorable terrain features can further enhance the use of the edge as a rubbing location and travel corridor.

A myriad of possibilities exist for using this technique. One of the most successful I have seen is to design multiple habitat edges that all converge on an important section of habitat, such as a food plot or thick patch of bedding cover. These convergent edges not only enhance the use of that food or cover habitat, they can produce more predictable travel routes to and from those important habitat features.

For bowhunters, hunting near or along the edge of large food plots can often be frustrating, as deer may enter or exit the food plots at any number of locations that are out of bow range. However, designing a habitat edge to intersect the food plot can be just what is needed to produce more predictable entrance routes into the open food source. If the intersecting habitat edge can be designed to run along favorable terrain, the use of this feature as a travel route to the food source can be enhanced.

In situations where a neighboring property consists of very thick cover, such as a heavily timbered area or an over-grown field, deer and especially bucks can be influenced to travel more predictably out of the neighbor’s thicket and onto the managed property by creating habitat edges that run from the property border toward sections of high-quality habitat on the managed property. Any time those habitat edges can use favorable terrain is a real bonus. Even creating roads that run along favorable terrain features away from the neighbor’s cover habitat and toward the center of the managed property can be useful, especially if those roads are left unmaintained over a period of years.

Creating more predictable deer travel patterns may not be a matter of influencing deer to go anywhere in particular. Creative habitat design work can simply be used to produce more total hunting “hot spots” on a given property. When analyzing the observation data of properties that have been able to produce biological management success but are struggling to produce hunter harvest success, one the most common problems I see is hunters over-hunting a few locations on the property. When queried as to why they are hunting these locations so often, the answer is usually that the property only naturally has a few obvious hunting hot-spots, such as a habitat bottlenecks, saddles in ridge-lines, creek and fence crossing spots, etc. These handful of obvious hot-spots then get over-hunted.

Heavy hunting pressure concentrated in a few locations greatly reduces the chance of seeing older deer. Mature animals are quite adept at picking up on heavy hunting pressure and will very quickly learn to avoid using those locations during daylight. In this type of situation, creative habitat planning can be used to produce more total hunting hot spots scattered more evenly across the property. This allows hunters to spread out more and put less pressure on individual hunting locations. Observation and harvest data from managed properties that are successful at harvesting older bucks strongly suggest that the oldest deer are usually harvested from stand locations that have experienced the least hunting pressure. Having more “good” hunting spots on a property, hence spreading hunting pressure between more locations, can produce better harvest results.

Habitat management is both an art and a science. Both aspects of habitat planning can be used to increase the biological success of a program. However, the art of habitat design can also be used to increase the often forgotten key to total program success – what is hanging on the meat pole. Whether used to influence deer to travel exactly where desired, funnel deer from adjacent areas onto the managed property, or simply produce more hunting locations to spread out hunting pressure, creative habitat plans involving smart placement of habitat edges and linear features along preferred terrain can be the final piece of the management success puzzle.

Editor’s Note: Bryan Kinkel of Tennessee is the owner of BSK Consulting, a wildlife and habitat consulting company. He specializes in small-land management, deer herd photo surveys and deer use of terrain and habitat.