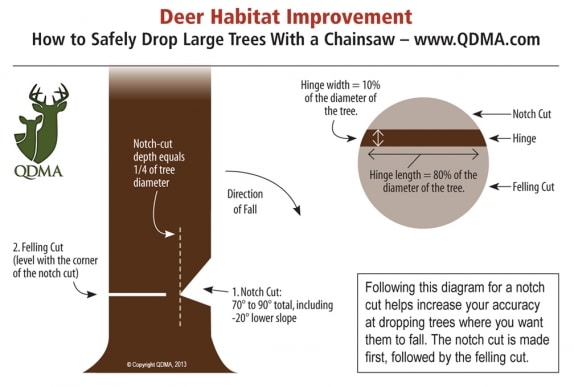 A chainsaw is a valuable tool when it comes to improving deer habitat and manipulating a landscape to enhance hunting strategies. It is also a tool that can severely injure or kill you, especially when used improperly.

One of the most common ways I see people mis-using a chainsaw is when they are cutting down large trees. Hinge-cutting is a popular technique for enhancing deer habitat, but this technique is best for small trees that you can easily handle. It’s not safe to attempt to hinge-cut large trees, for reasons I will explain. The trouble is, it’s tough to define “large” in terms of trunk diameter, because tree species vary in density and other characteristics that make them handle differently when cut, and even “small” trees can hurt you if you aren’t careful. Err on the side of caution: If in doubt when studying a particular tree, consider it “large.”

Here’s what people tend to do WRONG: They walk right up to these large trees and make a single felling cut, right into the trunk of the tree, and saw until the tree falls. Often this works, and no one gets hurt, and nothing valuable is destroyed. But these people should consider themselves lucky. They avoided several potentially bad outcomes of a cut like this.

First, when you cut a large tree like this, you have little control over the direction in which the tree will fall. Enough said.

Second, unless the tree has an obvious lean, you can sometimes end up with the weight of the tree squatting on the saw bar and pinching it. Now you’re in a mess. You’ll need wedges and an axe, or rope and a come-along, to open the cut and free your saw. Obviously, rescuing your saw when it’s pinched in a large tree is a risky operation on its own that is better avoided in the first place.

Third, and most significant, large trees cut down this way can perform a number of unexpected stunts as they fall, many of which can result in your being injured or even killed. One example is what’s known as a “barberchair.” Instead of leaning and falling as you saw through the trunk, the tree splits vertically until it snaps at some point above the ground, and the half-trunk and top of the tree fall straight to the ground. This often happens extremely fast, so fast that the chainsaw operator might still be standing at the base of the tree when it collapses.

To see a classic barberchair, watch the video below. The saw operator was lucky that he heard the tree splitting and had removed his saw and backed away before the tree collapsed. He had time to get out of the way, but that is not always the case.

Even if the tree begins to lean and fall like you want, the butt can still split as the tree is falling, and usually the top half of the butt kicks back violently in the general direction of – you guessed it – the person holding the chainsaw.

There’s a much better method for felling large trees, and it’s shown in the diagram above, which is based on guidanceQDMA received from the Game of Logging training program. Following the instructions in the diagram, you make a “notch cut” first, and you make this cut on the side of the tree that faces the direction you want the tree to fall. Then, you make the felling cut, leaving a hinge. The hinge holds the tree to the stump during most of the tree’s fall, and it guides the tree in the intended direction.

Not only does this method help ensure the tree falls where you want it to, it greatly reduces the possibility of any surprises, like splits, butt-kicks and barberchairs. In the photo in the Gallery below, you can see images of a large white oak that died at QDMA Headquarters. I used the notch-cut method to bring it down safely.

Obviously, even a notch cut can’t make a tree fall in a certain direction if the tree is leaning heavily the other way (at least not without the use of wedges and a lot of expertise). And, anytime you use this method, once the tree begins to lean into the notch cut, remove the saw, stop the engine, and walk quickly away from the falling tree along a planned, cleared path of escape at a 45 degree angle from the falling tree.  Even notch-cut trees can snap, roll or jump as they hit the ground, and it’s best to be at least 20 feet from the stump and behind a standing tree if possible.

It should go without saying that you don’t ever crank your chainsaw, no matter what you’re going to cut, without putting on your helmet, eye protection, gloves, and safety chaps. But I’m saying it anyway.

So, the next time you, or someone you know, needs to drop a large tree, don’t give it the old Jedi lightsaber chop. Take your time, plan your cuts, and use the notch-cut method to bring the tree down safely.