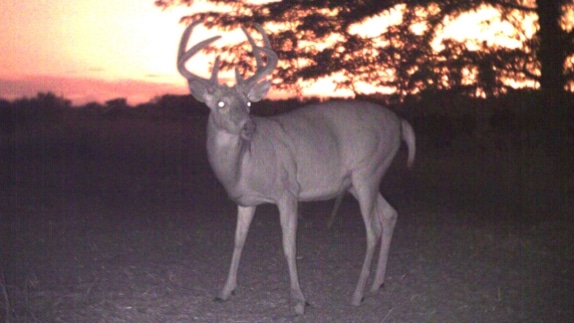 It’s rare that we as hunters of wild whitetails can piece together a lifelong photo album for a single buck. Antler size and character make such drastic leaps in the first three years that it is seldom possible to match an adult buck with his photos as a yearling – assuming he even appeared in your photo collection that year. However, sometimes a buck carries a unique marker that allows you to track him without relying on antlers, providing a rare window into the life of a whitetail buck.

QDMA member Winston Zimmerman of Pennsylvania is following such a buck where he hunts in Appanoose County, Iowa. Somehow the buck injured its left front foot, which remains permanently enlarged, providing an ID tag in any photos where that foot is visible. Though less prominent, there is also a small notch in the top of the buck’s left ear. Nicknamed “Hook,” the buck first showed up in Winston’s trail-cameras in 2009, and Winston believes the buck was 2½ years old then. Hook was still showing up on camera in fall 2015 at an estimated age of 8½. Looking at the highlights of Winston’s collection, one thing jumped out at me: Hook’s wild roller-coaster ride in body condition in a single calendar year.

Look at the two-shot progression below. The first shot was taken on September 4, 2013. The buck is likely 5½ in

this photo. Look at that belly! Study the musculature of the neck, shoulders and hindquarters. Then, look at the second photo, taken almost seven months later on March 23, 2014.

Note the injured left front foot in both photos, without which you would never know this was the same buck. Where did that belly go? There’s a dark hollow place at his waist where a belly used to be. His neck, shoulders and hindquarters have all but disappeared. He now looks like a small doe wearing the skin of a mature buck.

Recent research has found that bucks can lose as much as 24 percent of their body mass from pre- to post-rut. These two photos put an exclamation point on that statistic by showing you just how dramatic that change really is. But keep in mind there’s an up as well as a down – bucks can lose a significant amount of weight during the rut, and they can beef up again in time for a new rut. Hook helps us again with another photo taken just short of five months later. 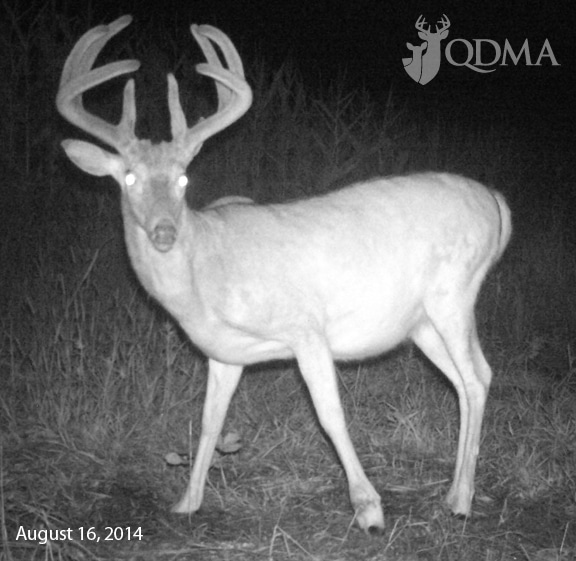 Don’t just look at the buck’s newly engorged stomach and how his body is filling out his skin again. Consider, too, that in those five months the buck’s body also produced another large set of antlers!

Bucks are amazing animals. Physical changes of this degree are rarely seen in people except in cases of catastrophic illness and injury, or extreme physical training. Most bucks do it every year, including a complete cycle of decline and recovery. This cycle has its victims. Some bucks don’t pull out of their post-rut slump, especially in extreme winters. This is where QDM enters the picture.

Through habitat improvement, you can provide a safety net to catch bucks after the rut, preventing crash-landings. The more forage and cover you provide year-round, the less dramatic the swings in buck body condition. Winter browse is critical in this formula. Planting annuals in your food plots for fall hunting attraction may not necessarily help with post-rut recovery. But when winter browse is abundant, post-rut recovery begins sooner, and then spring and summer forage are bonuses. That leads to bigger-bodied, bigger-antlered bucks in hunting season.

Since 2009, Hook has only been seen by hunters on two occasions, Winston told me. And now, he hasn’t shown up in a photo since September 2015, an unusually long absence for him. Winston still hopes Hook turns up again soon. Either way, the folks who manage the habitat where Hook lived were doing things right, enabling Hook to bounce back from his rut exertion and return to action in top physical form for a lot more years than most bucks ever see.