I had never read a comprehensive article with shed-hunting strategies for specific regions of the whitetail’s range. So, I wrote one! I interviewed six shed-hunting nuts from the Midwest, Mississippi River Valley, Deep South, Appalachian Mountains, Northeast, and the Northern Great Plains. Let’s look at what Jesse Ross of Saskatchewan had to say about shed hunting the Northern Great Plains.

NDA members read my article in Quality Whitetails magazine in 2020. Now, NDA is going to share my article free online, in six parts. To be notified as each part is released, sign up for NDA’s free e-newsletter here.

Each installment of this series is accompanied by a map from the onX Hunt app in that region, showing actual terrain examples you should look for. 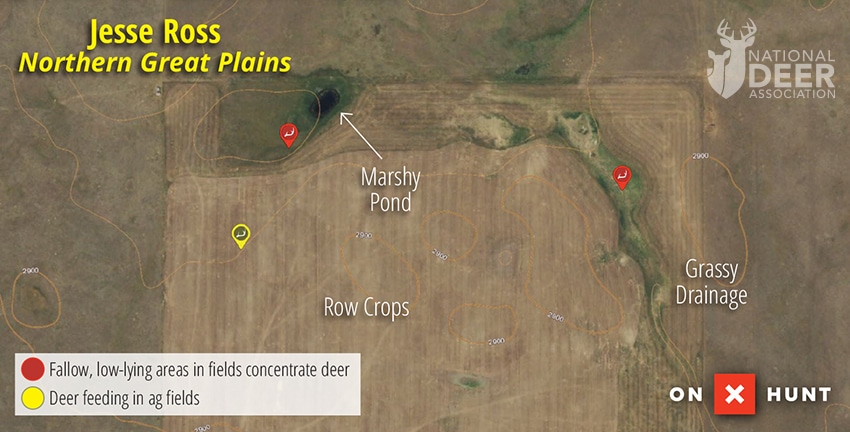 The Great Plains is wide open country with large expanses of prairie and agriculture. Jesse Ross lives in central Saskatchewan on the most northern extent of the Great Plains, as it transitions to the “bush” – thick, shrubby cover typical of this region. This area of the province is home to whitetails, mule deer, moose and elk, although Jesse primarily targets whitetail sheds. Most years Jesse will pile up 150 or more whitetail sheds with a few bonus sheds from the other species. He begins his search around Christmas and tries to pick up most of his sheds before February, when the area receives most of its snow.

Due to long, hard winters at this latitude, deer are often stressed to find suitable food sources to pack on calories during winter. Jesse takes advantage of this and almost exclusively focuses his shed hunting efforts on food sources. Most often these food sources are agriculture fields, either row crops or alfalfa. When approaching these fields, he starts with the outside edges and then will strip search the rest of the fields, paying special attention to any marshes or other unplanted grassy areas within the fields.

Jesse noted that any feature that breaks up fields, such as small bluffs, pockets of brush, or groves of trees, seem to concentrate deer during shedding. Roadsides and fence lines also produce a fair amount of Jesse’s sheds, especially where deer crossing is funneled to a small area. After all the snow melts in spring, Jesse walks patches of the bush where he has seen high deer activity through winter and heavy trails exiting ag fields.

Jesse has found sheds in very unlikely places where most hunters do not think to look. Some of his biggest sheds have come from people’s yards, and he has found one of the best areas to find sheds is around old abandoned homesteads. Other unique shedding areas Jesse targets are grain piles or stacks of grain bags that are stored outdoors due to shortages of storage space or grain that was harvested when too wet. These grain piles concentrate deer in wintertime and deer even break holes in grain bags with their hooves or antlers to access the grain. Of course, this winter concentration of deer creates an excellent area to find sheds.

Hopefully, the very specific strategies these guys have described hit home in some way and have given you ideas of new places you should search for sheds. Regardless of where you are located, I believe each of these hunters have described at least one strategy or principal that you can apply in your area. Water sources, thermal cover, food sources, bedding, and transition areas are found across the whitetail’s range, and deer are consistent on how they use these features, regardless of which state or province you may be in. Good luck in the shed woods this spring. I hope it’s your best season yet!