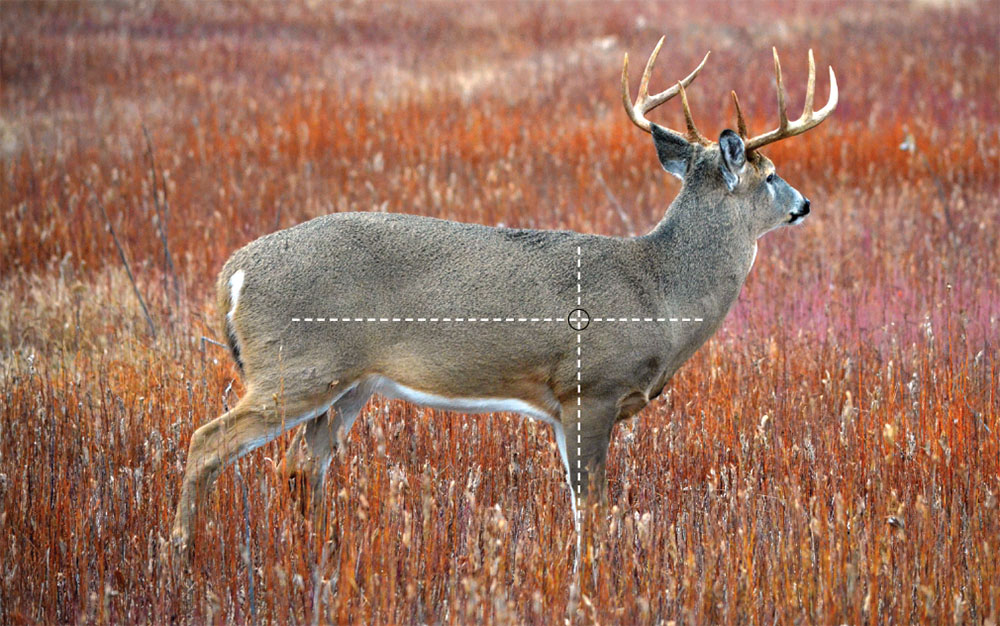 It happens to every hunter at some point in his or her hunting career. They hit a deer with a marginal or poor shot, and then must endure a long and difficult recovery, or worse yet, they’re unable to find the deer. Losing a deer is a terrible event and has caused countless sleepless nights for hunters. What percentage of wounded deer aren’t recovered, and more importantly, what can we do to minimize the chance that will happen to us this season?

Few studies have quantified the wounding rates for archery hunters, and even fewer have done so for firearms hunters. Wounding rates for archers have ranged from 16 percent for modern archery equipment to 50 percent for traditional bows (recurves and longbows). However, it’s important to note in the traditional archery study, the deer were radio-collared and only three of the 22 (14 percent) that were hit died and were not recovered. Thus, it was actually a 14 percent wounding loss to the deer herd.

Firearm wounding rates are assumed to be much lower, but data is limited. A United Kingdom study published in 2014 showed 97 percent of 2,179 deer that were shot with firearms were recovered. This is an exceptional recovery rate. A South Carolina study published in 1999 had a nearly 100 percent recovery rate with the use of a trained dog. This study quantified the distance deer ran and the difficulty recovering them based on where they were shot. Of the 493 deer harvested, deer shot in a vital area involving the heart and/or lungs ran significantly shorter distances than those shot further back. Importantly, there were no significant differences in the efficiency of firearms when grouped by caliber.

Taking it to the Field

How can you use this information to enhance your 2018 firearms season? A little deer anatomy and shot placement lesson can go a long way. There are obviously several places you can shoot a deer to kill it, but if you’re interested in a quick, humane kill with a minimal or nonexistent tracking job, and a loss of minimal amount of meat, then read on for a super easy method for ideal shot placement.

Where is a deer’s heart exactly located? Is it directly in line with a deer’s leg or behind it? Does the heart lay flat in a deer’s body or is it more upright? How about the lungs? Could you draw a deer’s heart and lungs to scale in their exact placement? If not, how can you expect to make a great shot? 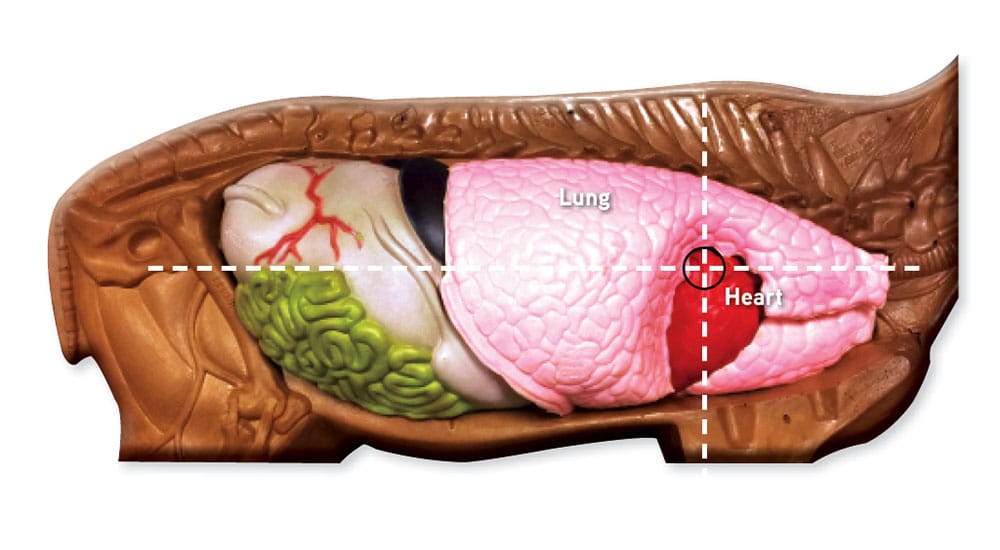 The diagram shown above shows exactly where a deer’s vitals are located (note that part of the lungs are cut away to show placement of the heart). That’s the first step to proper shot placement. Notice how the majority of the heart is directly above the leg – not behind it. Notice how the lungs extend from the belly to the backbone, which is about halfway to two-thirds up the body in the neck region to three-quarters up the body farther back. Notice the backbone does not run along the top of the body as many hunters believe. Finally, notice how there is no room between the lungs and spine. So, the often-discussed area by archers where they did not recover a deer because they hit it “above the lungs and below the backbone” simply does not exist. It’s likely these shots actually hit above the backbone and through flesh where there are no vitals.

Ok, now that you know where things are located, let’s talk shot placement. I’m a big fan of short blood trails and DRT. That’s the acronym used by the U.S. Army Marksmanship Unit instructors at QDMA’s National Youth Hunt. DRT means “drop right there” in reference to what the deer does when you place your bullet correctly. No long blood trails. No worries about rain washing blood away. No loss of animals to coyotes or bears. No worries of deer running into a sanctuary or on to the neighbors. Simply put the crosshairs on the right spot and squeeze the trigger. DRT.

Where is this magical spot? The beauty of its location is it is arguably the easiest spot to quickly locate while afield. Simply draw a vertical line straight up the deer’s front leg. Then draw a horizontal line across the body splitting it in half. Where those lines cross is your aimpoint. As seen above, this spot is at the top of the heart and through both lungs. Hit it and collect your deer. This shot ruins a minimal amount of venison and affords the greatest shooting error. You can literally hit several inches forward, behind, above or below this mark and still have a lethal shot.

Not Just for Firearms Hunters

This is a great lesson for archers too. Far too many bowhunters aim back behind the front leg on a broadside deer because they think that’s where the heart is, and because they’re afraid of hitting the large shoulder bones. The humerus or long bone in the upper leg runs forward (not up) from the leg, and the scapula or shoulder blade also angles forward (not down). This leaves a perfect window straight up the leg to shoot an arrow or bolt through to achieve a double lung and heart shot.

It Starts at Home

This shot placement is not where I was taught to shoot deer when I began hunting nearly 40 years ago. However, I can honestly say it is exactly where I aim today, it’s where I teach my kids to aim, and it’s where I encourage everyone at my deer camp to aim. Minimal tracking, minimal loss of meat, and greatest opportunity for shooting error are tough to beat. Can you shoot deer in other places to kill them? Sure, but the results of this placement are simply too good to intentionally aim anywhere else. Here’s to a great deer season and numerous DRTs!