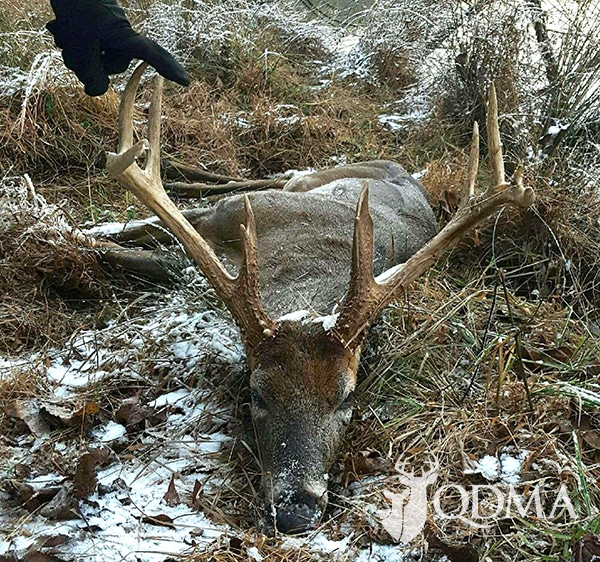 As a hunter and fisherman who enjoys clean water and clean forests, I despise a litterbug, Few things aggravate me more than physical evidence that someone was here before me and treated the land with disrespect. Litter also has a real impact on people and wildlife. When my children and I swim in rivers, I worry about broken glass. During a drought, a cigarette butt flicked from a car window can start a wildfire that damages habitat and timber or threatens towns and homes. This is to say nothing of the illegal dumper who arrives in the night and leaves entire truckloads of garbage on the lands of others.

But even small acts of littering can have surprising consequences. At some point in the past, someone in York County, South Carolina, tossed a bottle in the woods. They don’t know it, but they killed a deer with that bottle.

On January 6, friends of Bob McCutcheon found a large buck dead beside a pond on Bob’s 350-acre hunting property.

“It hadn’t been dead very long, maybe a day,” said Bob. “We checked for bullet holes. None. It didn’t look like it had starved. We thought maybe it had been hit by a car.”

Then, someone looked in the buck’s mouth. Somehow, the buck had stuck its tongue into the mouth of a glass bottle and couldn’t get it back out. The bottle had broken off, but the ring of the bottle’s mouth remained. It had apparently cut off blood flow to the tongue, because the end of the tongue appeared to be dead and already rotting (see the photo below). 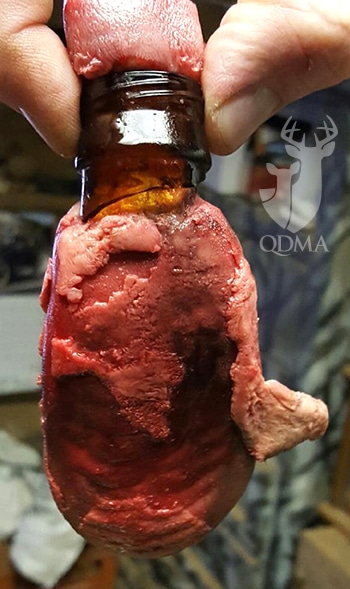 Though the exact cause of death is unknown, it is likely the deer died of thirst, which would have killed it faster than starvation. Thirst may also explain why it was found beside a pond.

“I had a picture of that buck on camera but had never lain eyes on it before,” said Bob. “He was the biggest buck I’ve ever seen on this property. He was a big deer for this area. I don’t know where it got that bottle. We keep a tidy place here. There’s no beer bottles lying around.”

“I’ve been hunting whitetails for 40 years, and I’ve never come across a whitetail that died in such a weird manner,” said Calvin Cox, a QDMA member who hunts across the road from Bob.

At QDMA, we’ve seen and heard about our share of weird deer stories, but death by bottle is a new one. It’s a freak occurrence, and that bottle you just emptied isn’t likely to get stuck on a deer’s tongue, but there are plenty of other reasons why we should all put litter in it’s place.