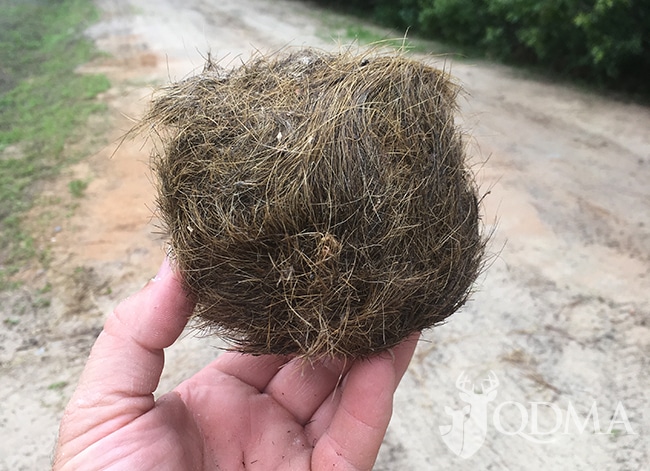 Over my 20-year career as a wildlife biologist, I have run across my share of odd and puzzling things in the woods. Possibly the oddest was a whole parachute I found in a deer’s stomach. Yes, I said parachute! While field-dressing a deer harvested on a military base, I noticed its stomach was abnormally large and tight. Curious as to what the deer had eaten, I cut the stomach open to find a 12-foot diameter parachute of the type used to drop military supplies from aircraft. I suspect the deer started to eat and swallow some of it, and once it started it couldn’t stop. The parachute was in a very tight and condensed ball that essentially filled up the entire rumen of the deer, but once removed and opened it would nearly cover a pickup truck.

Throughout my career I have also encountered lots of odd findings that led to quests for answers. I can’t tell you how many times I’ve asked myself (or someone else has asked me) questions like “What animal did this?” or “How did this get here?” Well, I encountered such a question a few weeks ago. Jody Smith, one of our Cabin Bluff hunting guides, walked into my office and set an object on my desk.

It appeared at first to be a small coconut. Once I picked it up, it was obviously a very tightly condensed hairball of some kind. Jody said he tried to cut it in half with a machete, but the blade simply bounced off. The hairball was light given its size but very dense, and it was obvious to me it was composed of feral hog hair, which are abundant here in coastal Georgia. Jody told me he found it on the ground in open hardwoods along the edge of a wetland and roughly 300 yards from our gut pile. Knowing this, and knowing hogs are always feeding on the carcasses (yes, hogs eat hogs), I came to the conclusion this must be a hairball from a hog’s stomach. “Bezoar” is the technical name for an indigestible mass found trapped in the gastrointestinal system of an animal, usually in the stomach, though it can occur in other locations of the GI tract. Deer can produce bezoars, too. In this case, I assumed it was produced by a hog, which died, and the hairball remained after decomposition took place – like bones. Satisfied with our answer, Jody took the hairball home as a souvenir to place in his man cave.

It wasn’t until a couple weeks later that we learned the real source of our mysterious hairball. Unfortunately, a large alligator was hit on the highway near Cabin Bluff’s gate. As a hunter, Jody was curious as to what the alligator had been eating, so he did a little field dissection. And yes, you guessed it – he found another very large and almost identical hairball comprised of hog hair. Mystery solved! Cabin Bluff has an extremely high population of feral hogs, and with hundreds of acres of wetlands, creeks, and salt marsh we also have a high population of alligators. Given the situation, it makes perfect sense that hogs are regularly consumed by alligators.

Knowing the source of the second hairball, I did a little research and found that bezoars are common in crocodilians. The digestive enzymes in an alligator’s stomach are particularly strong, and most bones and flesh are rapidly digested. On the other hand, hair and other keratinous substances like hooves and turtle shells are broken down very slowly. Hair sometimes accumulates in balls in the stomach and may later be regurgitated. The one Jody found near the wetland must have been regurgitated by an alligator.

One of the things I love most about being a wildlife biologist and getting to spend so much time in the woods is that nature is fascinating. It never stops amazing me, and there’s always more to learn. You must admit that a feral-hog hairball from an alligator’s stomach is a unique addition to anyone’s man cave. I can only imagine the conversations this bezoar will start!

About the Author: Dave Edwards is a certified wildlife biologist and the General Manager at Cabin Bluff in Georgia. He is also the owner of Tall Tines Wildlife and Hunting Consultants. Dave is a regular contributor to QDMA’s Quality Whitetails magazine and serves on the “Age This!” panel in every issue. He has served as an instructor in QDMA’s Deer Steward courses and a speaker at the National Convention and Branch events. In 2007 he was named QDMA’s Professional Deer Manager of the Year.