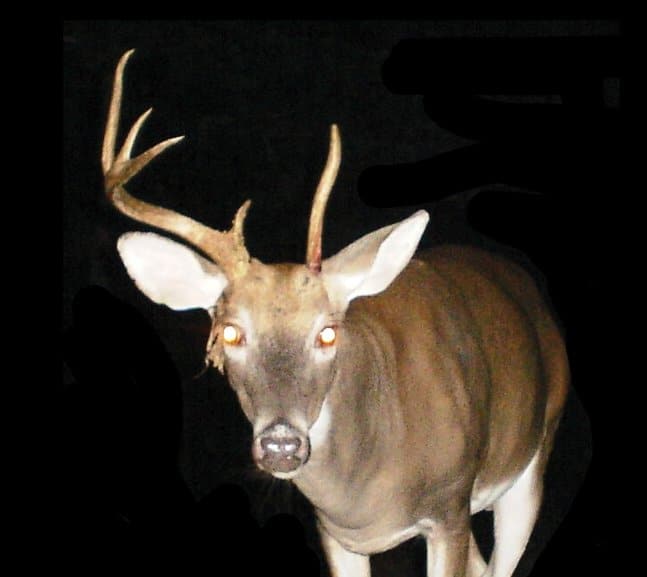 Among hunters, few topics stir discussion like hunting over bait or hunting deer with dogs – but the dispute over “cull bucks” comes close. While ethics play a major role in other debates, the dispute over cull bucks boils down to science – something that should not be debatable. Hopefully I can present some information that, combined with other research on this topic, will help lay to rest the myth of “genetic cull bucks.”

The term “cull bucks” can take on many different meanings. In one sense of the term, deer with abnormal antlers are identified by hunters as genetic misfits and targeted for harvest. This raises two questions: 1) Do abnormal antlers result from genetics? and 2) Can hunters influence the genetic composition of a free-ranging deer herd through selective harvest? The answer to the second question is already emerging through research: It is difficult or impossible for hunters to influence genetics in free-ranging deer. I won’t elaborate on that. Instead, I’ll focus on the first question, which was the subject of my recent research.

Anybody who has taken part in deer camp conversation knows that many hunters blame a buck’s odd-looking antlers on “inferior genetics.” It is crazy how this thinking has spread despite a lack of published research to support these claims; after all, I don’t think many hunters would deny that both sides of a buck’s antlers are determined by the same genetic code. There is not a “left antler” genetic code and a separate “right antler” genetic code, which is why the vast majority of whitetail bucks display left and right antlers of roughly equal shape and dimensions.

Nevertheless, “spike-on-one-side” bucks are hotly debated, with many hunters insisting this characteristic is gene-based and advocating the shooting of these bucks for gene-pool improvement.  I decided to look into this phenomenon while pursuing a doctorate in wildlife sciences at Auburn University.

For my study, I defined spike-on-one-side (SOOS) bucks as any buck having either:

1) a side-to-side difference in gross Boone & Crockett score of greater than 50 percent, or

2) a side-to-side difference of more than two typical antler points.

To determine the primary cause of SOOS antlers, I needed samples. During the 2010-2011 and 2011-2012 Alabama hunting seasons, I solicited hunters through articles in local newspapers and outdoor magazines, messages posted in Internet forums, and word-of-mouth. Many thanks also to the Alabama Department of Conservation and Natural Resources for announcing the SOOS buck research project through an e-mail to the state’s hunting license holders. Participation from sportsmen in 18 different counties yielded a total sample of 71 specimens. Due to obvious logistical constraints of transporting whole white-tailed deer carcasses back and forth across the state, I opted to use whole skull samples or sawed off antlers that had at least 1 inch of bone remaining in all directions from both pedicles.

After hours of sweating over boiling pots of water, I had cleaned the hide and tissue off the samples and was able to examine the skulls for obvious signs of physical damage. You see, anecdotal evidence gleaned from several years of examining what I call “dirty” sheds (sheds that fail to separate cleanly from the pedicle) and tracking antler development of those deer in future years led me to hypothesize that most SOOS bucks are the by-product of injured antler pedicles. This hypothesis conflicted a bit with data presented by R.G. Marburger and his co-researchers in 1972, who showed that 69 percent of bucks with malformed antlers had suffered old gunshot wounds or leg fractures; however, the driving theme was consistent with my hypothesis – SOOS bucks are a function of external forces and not genetics.

Overall, I confidently assigned “probable cause” to 44 of the 71 total SOOS samples, and in fact, pedicle or skull trauma was the leading cause of SOOS antlers with 34 cases. Now, I’m sure a few skeptics still clinging to the concept of “genetic cull bucks” are wondering about the 27 SOOS bucks that I couldn’t identify a likely reason for having abnormal antlers. Remember that my sampling protocol was restricted to examining only the cranial region of each buck, and that based on R.G. Marburger’s research, a trained eye would likely have found evidence of healed leg fractures, old gunshot wounds, and other skeletal injuries in most of the remaining “mystery” specimens. Additionally, testicular injury has been demonstrated to induce SOOS antlers in bucks, and I obviously couldn’t account for those injuries either.

But back to what I could examine. To understand why pedicle damage negatively affects antler development, one needs a little more advanced lesson in white-tailed deer anatomy. The nerves and blood vessels that supply developing velvet antlers are located on the lateral side of both pedicles, and bucks possess something called the “antlerogenic periosteum,” which not only includes the pedicle but also a surrounding region of the frontal bone (this entire area is capable of growing antlers). Given the complex network necessary for normal antler development, any injury to the pedicle or skull is likely to disrupt this process and result in stunted growth.

Most commonly, it appeared that antlers had failed to cleanly separate from the pedicles (as in normally shed antlers) and that the antler base had fractured off portions of the pedicle and sometimes even the surrounding cranium – those “dirty” sheds I mentioned earlier. Although the antlerogenic periosteum tries to heal itself in advance of the next antler growing season, the integrity of the pedicle is compromised and becomes a messy combination of intact pedicle and callus tissue. Picture how water flows out of the end of a garden hose, then picture what happens when you partially block the nozzle with your thumb. The blood supply and nutrient flow necessary for normal antler development is impeded leading to stunted growth and irregular antler configurations due to the animal’s prior injury. Complicating the issue once initial damage occurs, subsequent antler cycles tend to re-aggravate the injury, resulting in repetitive abnormal antlers.

All of this is interesting, but what does it mean for the white-tailed deer hunter and manager?

Although pedicle/skull trauma was the overall leading cause of SOOS antlers in our sample,  I did not detect any cranial damage in the 10 yearling (1½-year-old) bucks in the group (see the graphic in the Gallery below). This is not altogether surprising as most pedicle/skull injuries that result in antler deformities were likely sustained in combat with other bucks during previous ruts – and almost no bucks engage in serious fights as fawns. Rather, other than three cases of deer breaking antler main beams after shedding velvet, I could not determine why SOOS antlers had developed on the remaining specimens using only the skull or skull plate.

Leaning on data from prior studies, I surmised that most SOOS antlers in yearling bucks were due to skeletal injuries. It is well documented that antler deformities due to skeletal injuries progressively disappear with each subsequent antler growth cycle, meaning you can expect most SOOS yearling bucks to develop normal antlers in another year or two. Therefore, I would discourage harvesting yearling bucks with abnormal antlers unless you have serious overpopulation issues and the chief objective is simply reducing deer numbers.

As for older bucks, I documented a definite trend toward increasing likelihood of obvious injury with increasing buck age. As mentioned, once the initial pedicle injury takes place, re-aggravation of the antlerogenic periosteum is likely with each subsequent cycle of antler growth/shedding, often resulting in more extreme SOOS antler configurations.

A goal of Quality Deer Management (QDM) is to improve buck age structure by protecting yearling bucks. Additional age classes can also be protected, but the target minimum age for buck harvest should be a realistic goal based on hunter experience and local conditions. SOOS bucks older than 2½ probably won’t outgrow their SOOS tendencies, but in a QDM program they should be treated like any other buck: If they meet the minimum age, they are eligible for harvest. As QDMA founder and wildlife biologist Joe Hamilton pointed out in his recent article The Real Trophy, the jawbone of a buck, as much as the antlers, should be considered a trophy. In a QDM program, SOOS bucks should neither be protected beyond your age goal for buck harvest nor removed before meeting your age goal.

Besides the underlying principle that SOOS antlers are caused by physical injuries and not genetics, the take home messages of this research are three-fold.

First, the underlying cause (skeletal versus pedicle/skull injury) of SOOS antlers determines whether or not a buck has a decent chance of developing normal antlers in the future.

Second, yearling SOOS bucks stand a chance of developing normal antlers in the future and should be protected from harvest like normal yearlings.

Lastly, adult bucks will probably continue to carry SOOS antler characteristics throughout their lifetime, making them a candidate for harvest if they meet the normal age-based harvest criteria, like any other buck.

Let’s be clear about one thing: Harvesting SOOS bucks does nothing to improve the genetic quality of a deer population. Hopefully, this research will hammer another nail in the coffin of the mythical “genetic cull buck.”