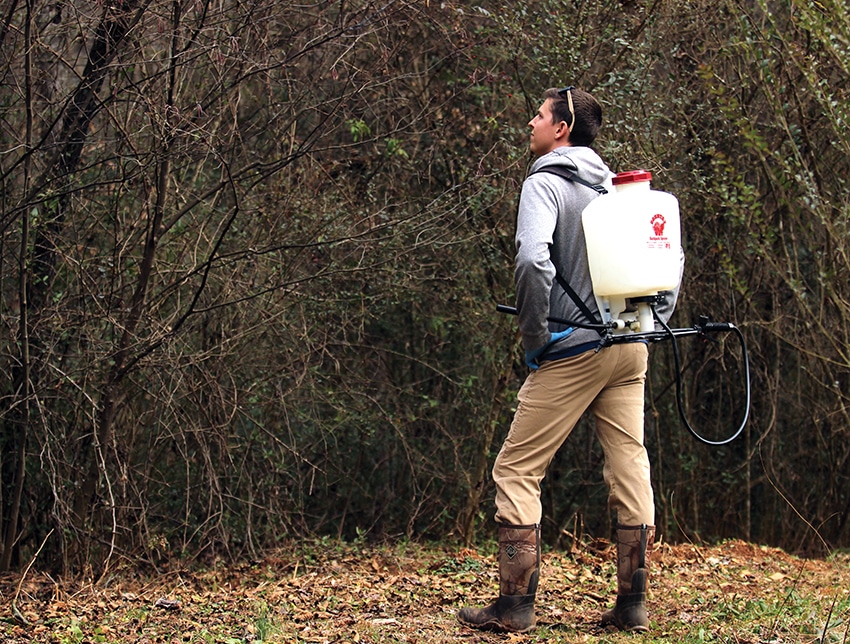 As wildlife managers, we must control pesky invasive plant species to improve habitat and promote native vegetation that serves as both cover and nutritious forage for deer and other wildlife species we wish to promote. Unfortunately, this often means spending a lot of time treating invasives and spending money on control equipment and herbicides. But how do you choose which species to control? Ideally, we would kill every last invasive plant on the lands we hunt and be rid of them forever, but is this possible?

Invasive plant species often have a suite of characteristics that make them excellent competitors in our native plant communities. These characteristics include high seed production rates (like autumn olive), fruits that wildlife readily distribute (Chinese privet), foliage that is poisonous or low in nutrition (sericea lespedeza), shade tolerance (Japanese stiltgrass), and tolerance of hot or dry soils (bermudagrass).

I would love to tell you that in a weekend or two you could kill all these and other invasives on your property and never have to worry about them again, but for many reasons this is not the case. So instead, let’s take a balanced look at invasive species control resources, characteristics of invasives, and which battles are worth fighting.

First, we must look at what resources we have at our disposal to deal with invasives. Time is often the largest limiting factor for many of us as we juggle a full-time job and work on habitat projects on weekends between family duties, hunting and other responsibilities. If you do not have enough time to work on your own habitat improvements, you may wish to enlist the help of a consultant, as there are hundreds of forestry and wildlife consultants across the country, and many of them do invasive species control for their clients. Whether you can afford to hire outside help will of course depend on your budget.

Often herbicides are the very best option for controlling invasive species, but they can be pricey when treating large expanses of non-native invasions. However, herbicides usually are quite cost effective on a per-acre basis as they do not require large amounts of chemical per acre. There is a large buy-in cost associated with many herbicides because you must buy them in large quantities, making them a larger up-front investment. That will later balance out as a container can be used to treat a large area. Other herbicides, such as glyphosate, may require more product per acre but are cheaper investments as the same size container will treat a smaller area.

Your herbicide application methods will vary depending on the species you are treating and the equipment you can afford. For some invasive control measures, a cheap spray bottle and hatchet or chainsaw will be ideal! In the case of large scale invasions in expansive timber, control is often best achieved by hiring a skidder or helicopter to deliver the herbicide, which is obviously more expensive. For most invasives, a tractor or UTV will make herbicide applications simple, allowing you to treat large areas, and in some cases bush-hogging an area prior to spraying herbicide will make your control efforts more effective. If you don’t own a tractor or UTV, you will have to rely on a backpack sprayer to broadcast herbicides.

Fire can also be an effective and cost-efficient tool for controlling some invasives. Burning invasives prior to spraying can make them more vulnerable to herbicides, uncover foliage for better herbicide contact, and bring the growing portion of vines down to ground level. Burning can also be used to kill some species if their physiological characteristics and reproduction strategies cause them to be vulnerable to high temperatures. While fire can be very cheap, it is necessary that you invest in some basic equipment such as a drip torch, fire rakes, two-way radios, a backpack or ATV sprayer tank for having water on hand, and a tractor or leaf blower for clearing fire breaks. You will also need a knowledge of basic firing techniques, weather parameters, and fire safety protocol (best learned at an in-person training such as those provided by state forest service agencies). However, once a landowner invests in this education and equipment, fire can greatly reduce cost and increase effectiveness of invasive species control.

Obviously, the availability of the previously mentioned resources will be directly dependent on your most pivotal resource, your wallet. You must choose how much money you wish to invest in habitat improvement and how much of that you will allocate to invasive species control. This will require evaluation and ultimately a balance between killing invasive species and promoting beneficial species.

With money in mind, don’t lose hope if you can’t afford to entirely fund your invasive species control strategies. There are cost-share programs that have been established to fund habitat improvements, and some of these will provide cost-share funding for invasive species control. Contact your local NRCS county agent or state wildlife biologist to learn about programs that could aid you in your war on invasives.

I have never met anyone who had an unlimited amount of resources they were willing to invest in invasive species control. Most managers choose to treat some areas and some species and leave others alone. You must ultimately decide what you will treat for yourself, but here are a few species characteristics to consider while choosing which invasive species are worth the fight. It’s always important to learn as much about your enemy as possible before entering battle!

First, how invasive is the species? There is a gradient of invasiveness we as managers assign across non-native species. Some fall into a category of highly invasive species that overtake and destroy native plant communities, and kudzu is an excellent example of this. Others may be labeled as more benign invaders that do not pose a direct threat to plant communities as they don’t tend to overtake large areas but can create small invasions, such as fescue. Of course, an individual’s perspective on each species’ invasiveness will vary by their climate as this affects the competitiveness of plant species.

Species that can be controlled in one or two treatments make great targets as they provide quick gratification for your work and encourage you to keep hammering away at invasives.

While there is no way to completely remove all invasives on the landscape, some are more easily controlled in localities than others and some are virtually impossible to control. For instance, Japanese stiltgrass is easily killed with low rates of glyphosate or grass-selective herbicides. However, because it produces such a large amount of seed that builds up in the seed bank, there is no great way to quickly control this species. Research by Jarred Brooke and Dr. Craig Harper of the University of Tennessee has found the most effective herbicide treatment for this species is imazapic (Plateau and Cadre are two brand names). However, it is clear that the species must be treated yearly to avoid re-establishment. Tall fescue on the other hand can be relatively easily controlled with a broadcast application of glyphosate and follow-up spot spraying.

Another factor that can be considered is whether the species provides any benefit to wildlife. Any wildlife use can be viewed as either a reason to more aggressively treat a species or delay control until more noxious species are controlled. These wildlife uses of invasive species are often the cause of their rapid invasions. For instance, Chinese privet and autumn olive prolifically spread by the large amount of fruit they produce, which is readily spread by birds eating the fruit and distributing the seed through feces. In these instances, the beneficial element of the species is what makes it so dangerous – if birds didn’t spread the seeds of bush honeysuckle, Chinese privet, and autumn olive, these invasive species would not be nearly as prevalent across the country as they are.

When choosing between several species you wish to control, you must weigh all of the previously mentioned factors to come to a strategic decision that maximizes your time and physical resources for the greatest return on your investment. You must also realize that you will never completely eliminate an invasive species but should strive to reduce it to a small enough coverage so that it doesn’t reduce the quality and diversity of the plant community. You’ll be surprised at the response you get from native plants, as seen in this video:

Because of equipment, money, and time constraints, I personally choose to attack small patches of fescue, bermudagrass, and Chinese privet first, and after making progress I take on larger patches of kudzu, autumn olive, or Japanese stiltgrass. I like attacking the small patches to avoid future colonization and slowly expand my treatment area, eliminating patches in an expanding area. Species that can be controlled in one or two treatments also make great targets as they provide quick gratification for your work and encourage you to keep hammering away at invasives. Is ranking control of invasive species a good approach? I leave that for you to decide. Unfortunately, we must all choose between species and patches to control because we can’t kill them all with limited resources.

I am in no way advocating the planting or propagation of any invasive species! I would never plant Japanese honeysuckle, autumn olive or other invasives, and I take every realistic opportunity possible to control the invasive species on my hunting properties. However, I believe we as managers should evaluate our time, effort and resource investments to maximize the positive effect we can have on plant communities.

Ultimately, which battles you choose to fight will depend on your objectives and resources. I encourage you to weigh all of your options, research your enemies, and choose your battles wisely. It will make you a more effective habitat manager and will prevent you from being quickly overwhelmed by the pressures of hard-to-control invasive species.

Moriah Boggess is the State Deer Biologist for Indiana DNR. He's a QDMA member and Level 2 QDMA Deer Steward. He has a bachelor’s degree in fisheries, wildlife, and conservation biology from North Carolina State University and a master's from the Mississippi State University Deer Lab. He is also a co-founder of Hunt The Land, a website, blog, and podcast focused on habitat management, bowhunting and white-tailed deer. Instagram: @qdm4life